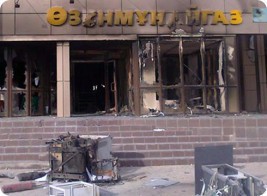 Court reduces the sentence of former oil executives in Zhanaozen

The Supreme Court of Kazakhstan mitigated the sentence of Duman Aripbaev and Unerbek Alshimbaev, former managers of the ‘Kompaniya Munay-Ekologiya’. Alshimbaev who had been accused by the prosecutors of provoking mass strikes of oil workers in 2011, was released on probation straight from the courtroom.

On 5 February, 2013, supervisory board of judges in criminal cases of the Supreme Court of the RK revised the executed court verdicts against the former CEO of the ‘Kompaniya Munay-Ekologiya’, Duman Aripbaev, and one of the top managers of the company branch, Unerbek Alshimbaev. According to the court decision, 7 years’ imprisonment assigned in relation to Duman Aripbaev have been reduced to 5 years’ in a general regime penal facility with confiscation of property and deprivation of the right to hold a position of financial responsibility for 3 consecutive years. Unerbek Alshimbaev received a sentence of 5 years’ imprisonment suspended for a period of 2 years. The sentence replaced the previous verdict of 7 years’ incarceration in a general regime penal facility.  The court ruled that Unerbek Alshimbaev be immediately released from custody.

Criminal cases in relation to the executives of the Zhanaozen oil companies were instituted in early 2012, following the determination of events that preceded the mass riots in Zhanaozen in December, 2011. Along with Duman Aripbaev and Unerbek Alshimbaev, on the defendant’s bench sat also Serik Baimukhambetov – a former Managing Director of Safety, Health and Environment of the oil company ‘Razvedka Dobycha KazMunaiGaz’. Serik Baimukhambetov was sentenced to 8 years’ imprisonment with confiscation of property.

In January 2012, the General Prosecutor of Kazakhstan, Askhat Daulbayev, stated that “the increase of social unrest and the prolonged industrial action of oil workers that subsequently escalated into riots, was stirred up by illegal actions of officials of local executive bodies and heads of oil companies”.

The court verdict in the case of former oil executives of Zhanaozen was handed down on 24 May, 2012; however, the results of the court hearings were disseminated to the public only on 26 May, 2012.

Ex-officials were convicted for committing ‘financial crimes’, and the trial against them had no direct relation to the Zhanaozen events.