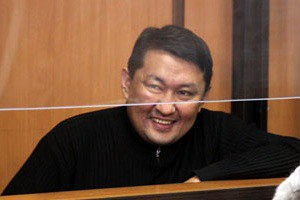 Askar Moldashev’s case: the prosecutor has no legal grounds for criminal prosecution

Askar Moldashev was arrested on 31 October, 2012 by workers of the National Security Committee (KNB). The arrest took place with gross violations of procedure, and the course of the preliminary investigation triggered rumours of fabrication of evidence by the NSC. According to Askar Moldashev and his wife, the NSC officers planted drugs on him, and on these grounds they initiated a criminal case against him.

On 14 January, 2013, the Specialised Interdistrict Criminal Court of Almaty held a hearing in the case against Askar Moldashev. The trial was held behind closed doors. As reported to Open Dialog Foundation by a journalist, Andrey Tsukanov, Prosecutor Aidos Tolepbergenov abandoned the original charges under Article 259, section 3, paragraph “v” of the Criminal Code of the Republic of Kazakhstan (‘possession of drugs on a large scale for the purpose of distribution’). The deed under this article is punishable by a term of 10 to 15 years imprisonment with confiscation of property. Instead, the prosecutor offered to reduce the charges. Still, during the hearing, the public prosecutor was not able to explain the reasons for such a decision. As a result, Judge Ertorgan Sadvakasov ruled that the case be returned to the prosecutor of the Bostandyk District in order to amend the charges faced by the defendant.

On 29 January, 2013, it transpired that the Prosecutor of the Bostandyk District of Almaty produced a new indictment against Askar Moldashev. At the moment, Moldashev is facing charges of a less grave crime, stipulated in Article 259, section 1.1 of the Criminal Code (‘possession of drugs on a large scale without the intent to distribute’). This article mandates a penalty of 3 to 7 years’ incarceration. The case was transferred to the jurisdiction of the Bostandyk District Court in Almaty.

Thus, the judicial proceedings in the case of Askar Moldashev started again with a clean slate. On 5 February, 2013, the Bostandyk District Court of Almaty held a new preliminary hearing behind closed doors. The counsel Inessa Kiseleva has announced her intention to file a motion with a request that the case be returned for re-investigation due to gross violations of procedure on the part of the investigators. Judge Yelena Kvan recommended the prosecutors pay close attention to this petition. The main trial is scheduled for 18 February, 2013. The trial will be open.

However, new cases of the blackmail and threatening of Askar Moldashev by the NSC have been reported. On 24 January, 2013, whilst remanded in the detention facility, Askar Moldashev wrote a letter to his friends and family. In the letter he informed them that on 23 January, 2013, he was ordered to report to a further meeting with the NSC member named ‘Arman’. The man advised Askar Moldashev to disclose sources of information and funding of the ‘Golos Respubliki’ newspaper, and, in exchange, he offered him a reduction in prison term. It was the third conversation NSC officers had held with Askar Moldashev. In previous meetings, the NSC workers: Nurzhan, Zhangazy Zhilkibayev and Baurzhan Kainbayev also strove to induce Askar Moldashev to provide information about the ‘Golos Respubliki’ newspaper and to force him to persuade his brother, Daniyar, to cooperate with intelligence agencies. Should he  have refused, the security forces were “to destroy the lives of Askar Moldashev’s loved ones”.

As was the case previously, Askar Moldashev refuses to cooperate with the NSC, and that’s why he fears for the safety of his family members: his brother Daniyar and his pregnant wife Tatiana, who was compelled to leave the country. Askar Moldashev hereby calls for the protection of his brother and journalists of the newspapers: ‘Golos Respubliki’ and ‘Vzglyad’ as well as the TV channels: ‘stan.tv’ and ‘K+’ against potential provocations.

Because of the activity of Daniyar Moldashev, the publisher of the ‘Golos Respubliki’ newspaper over the past three years, he and his family have been repeatedly subjected to pressure and oppression: beatings, telephone tapping, terrorism charges. In his letter, Askar Moldashev stated: “the country’s legal system is terminally ill and so is the fulfillment of the political will of the body, which has placed itself above the law. This body, as you perfectly understand, is the National Security Committee”.

The above mentioned violations, committed during the preliminary investigation, as well as the first hearings, including the recognition by the prosecutors of the fact that the legal grounds are insufficient to institute a criminal prosecution, and constant threats from the NSC prove that Askar Moldashev’s case is politically motivated.

In connection with the shut-down of the mass media outlets (the newspapers: ‘Vzglyad’, ‘Respublika’ “as one media outlet”, the news website ‘stan.tv’, the TV channel ‘K+’), on charges of extremism, the authorities must not be allowed to obstruct the work of independent journalists and initiate provocations against them.

We hereby address human rights organisations and media outlets which are interested in helping, to send letters and inquiries, as well as to phone using the phone numbers listed below, demanding an end to the politically motivated prosecution, initiated with the aim of exerting pressure on the independent media outlets in Kazakhstan.

More on this topic:
Daniyar Moldashev