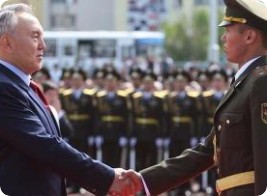 On 30 January, 2013, during the meeting with heads of law enforcement agencies, President Nursultan Nazarbayev demanded that the role of the Armed Forces be enhanced in order to ensure political stability in Kazakhstan. Nazarbayev’s instruction raises fears that the army could be used not only to protect the state against external threats, but also to suppress political and social dissent in the country.

Nursultan Nazarbayev addressed the security officials with the following statement: “Taking into account the external challenges, it is important to strengthen the role of the armed forces in order to ensure the security of the state, society and individuals. The Ministry of Defence was instructed to re- evaluate the entire arsenal of military capabilities that can be used to counter the attempts to destabilise the internal situation in Kazakhstan”. Also, the President gave instructions to develop the National Programme for Combating Extremism and Terrorism, and called on people to fight not only against religious extremism, but also other types of terrorist activities.

Lest we forget that previously, on 28 March, 2012, the General Prosecutor’s Office initiated a criminal case against opposition leaders (Muratbek Ketebayev, Mukhtar Ablyazov and his bodyguard, Aleksandr Pavlov), charging them with carrying out preparation for terrorist attacks in the city of Almaty. Also, the Open Dialog Foundation has reported some incidents which prove that the charges, brought by the General Prosecutor’s Office, had been fabricated. Hence, the allegations of the preparation of terrorist attacks had been made solely with the aim of discrediting the political opposition in Kazakhstan.

A renowned journalist Igor Vinyavskiy, who was forced to leave Kazakhstan in connection with the oppression, exerted by the government in relation to the independent media outlets, believes that President Nazarbayev is trying to retain his power, relying not only on the police, but also on the army. According to the journalist, Nursultan Nazarbayev is strengthening the role of the armed forces in order to moderate the Islamists from Afghanistan and to suppress potential mass protests in different regions of the country.

It should be noted that in the index of corruption in the defence sector, published on 6 February, 2013 by the Transparency International Anti-corruption Centre, Kazakhstan was classified within the fifth group of seven, which was labelled as ”comprising a high level of corruption”. Based on the study results, the sphere of defence of Kazakhstan is characterised by the absence of the practice of risk assessment, classifying the level of military spending, weak parliamentary control over military spending, weak mechanisms to prevent corruption, lack of transparency in the financing of public defence programmes.

Former Deputy Minister of Defence, Major General in Army Reserve, Amirbek Togusov, when commenting on the data published by ‘Transparency International’, noted that the growth of corruption in the military chain of command of Kazakhstan is connected with the general corruption in government institutions, law enforcement agencies and the judicial system.

Utility bills and food prices in Kazakhstan have risen incomparably with the inflation rate. Also, the manufacturing sector is undergoing a decline, which may soon affect the prices of fuel and lubricants in the domestic market. Meanwhile, the authorities of the state are reporting GDP growth and general improvement of the population’s welfare.

With the new 2013, pension payments in Kazakhstan increased by approx. 9 percent. Today, the average pension (including base pay) amounts to 42 258 tenge (approx. 200 euros), while the minimum pension is 19 066 tenge (approx. 100 euros). However, retirees say that the nine-percent increase in pension is next to nothing compared to the 10-20 percent rise in the price of utilities. For example, since the beginning of January, the price of electricity has risen by 5.9% in Almaty. In general, housing and communal services in the country rose by 8% in 2012. According to official data, inflation was 6 % in 2012[9].

According to the study, prepared by German insurer Allianz Global, in terms of true wealth of citizens, Kazakhstan ranked 51st (out of 52 countries, the total GDP of which constitutes 90% of world GDP). Personal wealth of the average citizen of Kazakhstan is estimated at 539 euros (for comparison, the Swiss have 207 thousand euro, the Lithuanians – 1.4 thousand euro). The minimum level of subsistence, planned in the budget, amounts to 18,660 tenge (92 euro). This figure corresponds to the minimum cost of living of the poorest countries in Africa, says a member of the lower chamber of parliament, Dariga Nazarbayeva, a daughter of the President of Kazakhstan.

Experts have also noted a decline in the industrial production in Kazakhstan. As stated by Muratbek Ketebayev, an economist and president of the ‘Civic Engagement’ Foundation, the quantum index of industrial production in January 2012 was 100.7%. In fact, it proves that the economy of Kazakhstan is suffering from stagnation. “Growth is being noted in the sphere of oil and gas extraction, but in such spheres as ferroalloys, flat-rolled products and copper, one can observe a decline,” – says Muratbek Ketebayev.  Special attention should be paid to the reduction in the production of gasoline (the quantum index – 63.2%). According to experts, this will lead to a sharp increase in the price of fuel and lubricants in Kazakhstan’s domestic market.

Such negative trends are in stark contrast with the statements of senior management in Kazakhstan, who report high rates of growth of the national economy. On 23 January, 2013, Serik Akhmetov announced Nursultan Nazarbayev’s economic success: “In 2012, the GDP per capita in Kazakhstan, according to preliminary estimates, was $ 12, 100; the GDP growth, despite the difficult global market conditions, was at a level of 5%”.

On 31 January, 2013, Human Rights Watch, in its World Report 2013, stated that the level of abuse and overall decline in respect for fundamental freedoms in Kazakhstan in 2012 is shocking. The organisation has noted that “Kazakhstan initiated a harsh and unprecedented crackdown on freedom of expression and political plurality, imprisoning outspoken opposition and civil society activists and shutting down an opposition group and key independent media outlets”. The report also mentions the conviction of striking oil workers in Zhanaozen and acts of torture, exerted in relation to them.

Hugh Williamson, the director of Europe and Central Asia Division of Human Rights Watch, stated: “Yet, the EU and the US have largely muted their public concern over the appalling rights records of all Central Asian governments at exactly the time when victims of government repression needed them to speak out on human rights”.

Workers and trade unions of enterprises ‘ArcelorMittal Temirtau’ and “Kazakhmys” initiated industrial action in order to protect their labour and social rights.

In Temirau, the trade union of Steel Mill Company ‘ArcelorMittal Temirtau’ expressed its protest against job cuts. In connection with a reduction in shipments of finished products, the plant management is planning to reduce the planned number of employees by nearly 3 thousand people. They offer their employees the opportunity to voluntarily resign in exchange for monetary compensation (750 thousand tenge (3,700 euro) for blue-collar workers, and 1 million 50 thousand (5235 EUR) for white-collar workers). The Metal Workers’ Trade Union addressed the Akim of Karaganda Province, Abelgazi Kusainov, the Akim of the town of Temirtau, Nurken Sultanov, the prosecutor of the town, Duman Karzhaspayev and a member of Majilis, Andrey Begeneyev, with a request to give them assistance in resolving this issue.

On 9 February, 2013, in Zhezkazgan, approximately 70 residents held a protest against the management of the local enterprise ‘Kazakhmys’. Participants of the rally protested against the curtailing of production of non-ferrous metals and against exerting pressure on the unions. Earlier, the authorities had not given permission for the organisation of the rally. On 11 February, 2013, the court sentenced one of the organisers of the rally, Berik Zhagiparov, to 7 days’ incarceration. The Akim of Zhezkazgan, Bauyrzhan Shingisov, made a promise to the organisers of the rally to solve the problems raised at the bargaining table.

On 6 February, 2013, the Military Court of Almaty rejected the appeal of the lawyer Serik Sarsenov against the verdict in relation to Vladislav Chelakh. Let us remind ourselves that on 11 December, 2012, Vladislav Chelakh was sentenced to life imprisonment for the assassination of 14 soldiers and the huntsman, committed on 28 May, 2012, at the border post ‘Arkankergen’ in the Almaty Province. Experts note that the outcome of the case was influenced by the political interests of opposing elite camps.

In his appeal, lawyer Serik Sarsenov noted: “In fact, V. Chelakh was convicted solely on the grounds of his own confessions, obtained through torture and deception. The verdict was based not only on evidence, which didn’t meet the requirements of reliability and admissibility, but also on blatantly falsified evidence”.

During the consideration of the appeal, Judge Bakhytzhan Karamanov dismissed almost all the motions of the defence. On 6 February, 2013 the court handed down a ruling, upholding the sentence against Vladislav Chelakh. Events in support of Vladislav Chelakh have been held in Almaty, Pavlodar and Karaganda.