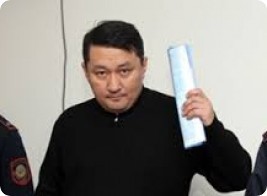 The prosecution did not have sufficient evidence to prove Askar Moldashev’s guilt; he had previously faced charges of drug possession. During the trial, gross procedural irregularities and inconsistencies in the evidence were revealed. Despite this fact, the court found Askar Moldashev guilty and handed down a suspended four-year prison sentence.

The legal process in the case of Askar Moldashev lasted 4 months, starting from 31 October, 2012. He was detained under very suspicious circumstances and was charged with ‘possession of drugs on a large scale with intent to distribute’. Askar Moldashev, who is the brother of the former publisher of the banned newspaper ‘Golos Respubliki’ (‘Voice of the Republic’), Daniyar Moldashev has repeatedly made statements to the effect that the evidence had been fabricated and that he had been receiving blackmails from the secret services of Kazakhstan.

First, the criminal case was considered in the Specialised Inter-district Criminal Court of Almaty, but later prosecutors rewrote the indictment act, charging Askar Moldashev with a lesser offence under Article 259, section 1-1 of the Criminal Code (‘possession of drugs on a large scale without intent to distribute’). The case was transferred to the jurisdiction of the Bostandyk District Court in Almaty.

During the trial, gross procedural irregularities and discrepancies in the evidence base have been revealed; they were reported by Inessa Kisileva, Askar Moldashev’s counsel, during the parties’ oral stamements:

Innesa Kisileva stated that Askar Moldashev’s arrest was clearly provocative. Shortly before his arrest, NSC workers had made attempts to induce Askar Moldashev to tacitly collaborate with the agency in order to collect information pertaining to the ‘Golos Respubliki’ newspaper. Askar Moldashev refused to cooperate, and, as a result, a criminal case was fabricated against him.

On 1 January, 2013, the trial of Askar Moldashev came to an end. Judge of the Bostandyk District Court, Yelena Kvan, held that Askar Moldashev was guilty of possession of drugs on a large scale without the intent to distribute, and sentenced him to a four-year prison term suspended for a period of 3 years (prosecutors had sought a 5-year suspended prison term). The judge also ordered his release from custody straight from the courtroom.

The Open Dialog Foundation welcomes the release of Askar Moldashev. However, taking into account the questionable nature of the criminal case, the objectivity of the sentence imposed raises doubts. A threat to the safety of Askar Moldashev and his family still remains, and thus, the development of this case must continue to be closely monitored by the international community.