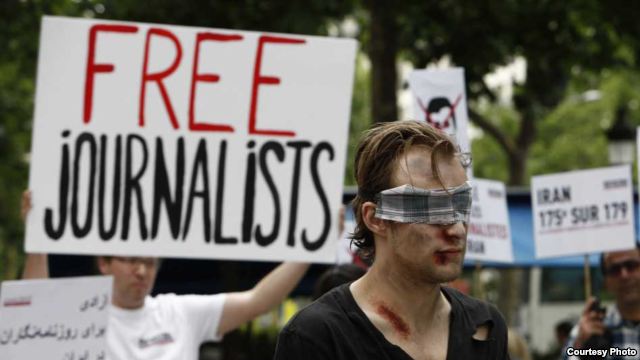 The critical deterioration of the situation of freedom of speech in Kazakhstan has been publicly announced by representatives of Kazakhstan community: a lawyer of the Public Foundation ‘Legal Media Centre’, Gulmira Birzhanova, head of the Union of Journalists of Kazakhstan, Seitkazy Matayev, human rights defender Yevgeniy Zhovtis and Professor of Print Journalism Department of the Kazakh National University, Gulmira Sultanbaeva. A lawyer and human rights defender Armangeldy Shormanbaev reported to the Open Dialog Foundation that the decision to terminate the activities of mass media outlets are politically motivated, so, in this situation, “legal mechanisms of media protection are powerless”.

Obvious examples of violations of the right to freedom of speech include not only a ban on the activities of the media outlets, but also the criminal prosecution of Askar Moldashev, the brother of Daniyar Moldashev, the publisher of ‘Golos Respubliki’, the administrative penalty against the editor-in-chief of the ‘Azat’ newspaper, Marat Zhanuzakov for violations of periodicity of the print medium; and numerous lawsuits, filed by officials against journalists for defamation.

A number of European politicians: German Bundestag deputies Christoph Strässer and Dagmar Enkelmann, a member of the Polish Sejm and Vice-Chairman of the Commission on Human Rights Robert Biedroń, and a Member of European Parliament for the Socialist Party of Ireland Paul Murphy have expressed their grave concern about the closure of independent media outlets in Kazakhstan, as well as about the harassment of individual journalists for their professional activities. Also, on the eve of the consideration of an appeal in the case of “one media outlet ‘Respublika’, members of the European Parliament: Sonia Alfano, Richard Howitt, Ana Gomes and Liisa Jaakonsaari addressed their statements to the Ambassador of the Republic of Kazakhstan to the EU, Almaz Khamzayev. In their letters, MPs expressed their hope that the appeal from the judgement would be considered fairly and in accordance with international legal standards. Despite the policy of “disregard”, adopted by the officials in Astana, these statements, according to journalists, were a great support to them.

Unfortunately, there was no response from the OSCE, despite the fact that Кazakhstan had violated a number of stipulations of the ‘OSCE Human Dimension Commitments’ simultaneously:
– free and widely available information of all kinds;
– the right to receive, possess, reproduce and disseminate information;
– creating basic conditions for a free and independent media.

At the same time, government officials publicly acknowledge that for the Administration of the President it is important to maintain control of the information space and public opinion.

On 23 January, 2013, at a meeting with a delegation of the ‘Reporters without Borders’ organisation, an Advisor to the President of Kazakhstan, Yermukhamet Yertysbayev, noted that the closure of opposition media outlets is going to have a negative impact on the international image of Kazakhstan. In particular, he drew attention to the lack of validity of the charges against the ‘Vzglyad’ newspaper: “I personally believe that during the case on the closure of the ‘Vzglyad’ newspaper, a forensic institute as well as language experts should have been engaged; also, the whole content of the newspaper should have been carefully analysed… but the court did not utilise its powers in full and now evidence is being criticised”.

Noteworthy are Yertysbayev’s words about the guilt of the opposition politician Mukhtar Ablyazov in the Zhanaozen events: “… for the citizens of Kazakhstan, Russia and all the other CIS countries, the issue of social strife poses a big problem. And in the near future it may become more serious, because social stratification is really increasing, the gap between rich and poor is hundreds or thousands of times higher than in other countries. Therefore, this problem is more acute in our country, and not in France. In Kazakhstan, for hundreds of thousands of people belonging to the poor sectors of society, there is only one billionaire. And if any man calls for fair distribution of wealth at the moment of the Zhanaozen crisis, as Mukhtar Ablyazov did, then his statements cannot be construed in any other way than an extremist incitement of social hatred.”

On 1 February, 2013, the head of the Ministry of Foreign Affairs of the Republic of Kazakhstan, Yerlan Idrisov, during a meeting of the Eurasian Club of Berlin, supported the decision to shut down certain media outlets, justifying it by the fact that the media outlets have been supposedly dependent on the opposition politician Mukhtar Ablyazov: “The ‘Respublika’ newspaper is not a truly independent newspaper, the ‘K+’ channel is not a truly independent channel. This is a special instrument, created specifically by Ablyazov in order to “attack” Kazakhstan”, – said the head of the Foreign Ministry .

An opposing stance was taken by Yermukhamet Yertysbayev, who stated: “As far as I know, ‘Respublika’ was financed not only by the oligarch Ablyazov, but also by a dozen other people in the country who secretly gave money to the newspaper”.

In general, the standpoint of the authorities regarding the control over the media outlets was summarised on 15 February, 2013 by the Ambassador at Large of the MFA of the RK, Usen Suleymen, who gave a speech at the closing session of the OSCE Conference: “Internet 2013”, “We want to move forward, if possible, rapidly, in the direction of freedom of expression, except in cases where the stability of our society would be threatened”.