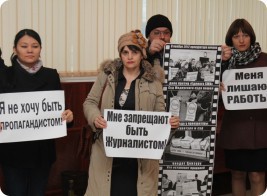 The Appellate Court deemed the newspapers: ‘Vzglyad’ and “one media outlet ‘Respublika’” extremist. The decision to ban the activities of the print media in Kazakhstan has taken effect. In violation of international treaties and domestic law, the Kazakh authorities have imposed censorship and prohibition of professional activities on individual journalists, thus putting their families in a difficult financial situation.

CONSIDERATION OF APPEALS, FILED BY ‘ONE MEDIA OUTLET ‘RESPUBLIKA’ AND THE ‘VZGLYAD’ NEWSPAPER

On 22 February, 2013, the Almaty City Court of Appeal upheld the lower court decision, according to which, on 25 December, 2012, “one media outlet ‘Respublika’” was considered extremist and its activities were banned in Kazakhstan. Previously, on 8 February, 2013, the Almaty City Court rejected a private complaint, filed by representatives of the ‘Golos Respubliki’ newspaper, who petitioned that the newspaper be allowed to operate until the decision to ban the activities of the newspaper entered into force.

The hearing was open, but Judge Raushan Adilbayeva refused to be photographed or captured on video (on 8 February, 2013, the court prohibited journalists from visually recording the prosecutor Timur Autalipov).

Formally, the defendant in the case was an inanimate object: “a newspaper”. In court, the defendant was represented by lawyers: Tamara Simakhina and Sergey Utkin (as third parties), as well as by Yelena Savinova and Gyuzal Baydalinova, who represented the owners of the newspapers: ‘Republican News – Business Review’, ‘The Republic – Business Review. Take 2’ and ‘The Republic – 2030’.

Media representatives stated in court that the prosecution’s lawsuit against the “one media outlet ‘Respublika’ is illegal, as it violates Art. 150 of the Code of Civil Procedure of the Republic of Kazakhstan (the CCP of the RK):

Also, on 8 February, 2013, the Almaty City Court upheld the decision of the Bostandyk District Court (of 20 December, 2012) regarding the discontinuation of the publication of the ‘Vzlgyad’ newspaper, and the appeal was dismissed. The newspaper was represented by the lawyer Amangeldy Shormanbayev and the counsel Gennadiy Nam. The defendant referred to the court’s verdict in the case of 37 oil workers, in which all reasons, which had led to the riots in December 2011, were listed, and still, ‘Vzglyad’ was not mentioned in the document. The counsels of the ‘Vzglyad’ newspaper are going to file a complaint with the UN Committee on Human Rights, since such a decision of the Kazakh court is a precedent-setting case which limits the freedom of speech in Kazakhstan.

Overall, the trials of the “one media outlet ‘Respublika’ and the ‘Vzglyad’ newspaper were conducted under gross violations of Kazakh law and international standards of fair trial:

1. Deprivation of the right to defence (Article 13 point 2 of the Constitution of the Republic of Kazakhstan).

2. Groundlessness of the court verdict (Article 218 of the CCP of the RK).

3. Violation of the principle of equality ofarms and competitiveness of the parties in a judicial process (Article 13 and 15 of the Code of Civil Procedure of the Republic of Kazakhstan).

Journalists of the “one media outlet ‘Respublika’ were not only forbidden to publish a newspaper called ‘Respublika’, but they were also forbidden to work together,which violates the right to freedom to work and to a free choice of occupation and profession.

The use of such vague phrases with regard to an indefinite number of journalists allow prosecutors and bailiffs to prosecute journalists for their professional activities. The editorial team of the ‘Golos Respubliki’ newspaper has publicly stated that now “the journalists of ‘Respublika’ won’t be allowed to work in their current composition in any newspaper”,because the prosecutors could also arbitrarily classify them as “one media outlet ‘Respublika’ and ‘other means of dissemination of the ‘Respublika’ outlet’”.

The prosecutor’s office and the court refused to explain how journalists should proceed in connection with the ban on the activities of the “one media outlet ‘Respublika’. Journalist Anton Shin filed a request to the prosecutor’s office that it be explained to him whether journalists of ‘Golos Respubliki’ are allowed to print their articles in other papers. In their response, the prosecutor’s office of the Medeu District in Almaty disregarded the question of Anton Shin, limiting themselves to the statement that he is entitled to participate in the trial. At the trial, on 8 February, 2013, a representative of the publisher of the newspapers ‘The Republic – Business Review. Take 2’ and ‘The Republic – 2030’, Gyuzal Baydalinova, addressed Judge Kuralay Kalekeyeva with the same question, but the judge ignored the inquiry.

“There is an ongoing struggle against people who support a particular point of view. And these people are being restricted in their right to practice journalism”- such a disturbing finding was made by a human rights activist, Yevgeniy Zhovtis, after the process had come to an end.

The disregard of gross violations of procedural law by courts gives every reason to believe that the decision to shut down opposition media outlets has been made at the political level, and it is a manifestation of censorship, which is prohibited under Article 20 of the Constitution and Article 2 of the Law ‘On mass media’.

More on this topic:
Kazakhstan , freedom of media