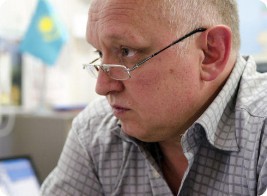 The court of cassation refused to grant the appeal in the case of Vladimir Kozlov. Meanwhile, his wife, Aliya Turusbekova, has reported that her husband’s health is deteriorating; she also fears potential provocations against him in the penal colony.

The consideration of the appeal in the case of Vladimir Kozlov was held in the Mangistau Regional Court of Aktau on 13 March, 2013. The trial was open; also, photo and video coverage of the process was allowed. The meeting was held in the Kazakh language but not interpreted into Russian, although an interpreter was present in the courtroom. Thus, the Russian-speaking civil society observers were not able to understand what was being said in court.

The court session was rather hasty. In their appeal, the counsel Venera Sarsembina and lawyer, Sergey Utkin requested that their client Vladimir Kozlov be acquitted, because the courts of first and second instance violated the right to a fair hearing. In particular, a number of witnesses, summoned by the defending party, were not questioned.

The representative of the public prosecution, Amirgali Zhanayev, limited himself to the statement that the court of first instance had complied with all the rules of law.

After that, the panel of judges, represented by Doszhan Amirov, Khamid Kazhenov and Ayzhan Molbayeva, issued their decision “to uphold the sentences, handed down by the Aktau City Court on 8 October, 2012, and by the Appellate Court of the Criminal Division of the Mangistau Regional Court on 19 November, 2012, and to dismiss the cassation appeals filed by the convicted V. Kozlov and his counsels: A.Plugov and V. Sarsembina”. Thus, the sentence against Vladimir Kozlov: the term of 7.5 years’ imprisonment with confiscation of property, was upheld.

Tadeusz Wozniak, a member of the Polish parliament, who was present at the hearing, has given the following comment on the developments in court: “I consider today’s trial a mere formality. The process was carried out very quickly, the judges deliberated for only 5 minutes … However, I still hope that justice will prevail in Kazakhstan. For our part, we will continue to defend the rights of political prisoners in Kazakhstan”.

Meanwhile, Aliya Turusbekova, the wife of the convicted Vladimir Kozlov, revealed some details of his stay in prison. In particular, recently, Vladimir Kozlov’s health has significantly deteriorated: he is suffering severe pain in his stomach.

In one of his letters to his wife, Vladimir Kozlov stated recently that the management of the colony has significantly stiffened their attitude towards him. “Here, there is a practice to write reports and explanatory notes even for petty and insignificant violations. And suddenly, in just over three days, there were approximately 10 reports written against me, which has never happened before. And, as an example, one report stated: “he didn’t raise his arm high enough (one time!) during exercise”, so, they were written for practically no reason at all,” – Vladimir Kozlov wrote in the letter.

According to human rights activist Yevgeniy Zhovtis, in the future it may serve as a reason for the introduction of stricter conditions of imprisonment: “Based on the fact that the convict has received several warnings or reprimands, the head of the prison may declare Kozlov a malicious infringer of the regime and, subsequently, he may be transferred to the sector of the prison (in the same colony) with stricter conditions of serving the sentence, which will entail restrictions on visits and packages. Finally, if they collect a few more of these warnings and reprimands, potentially for some more serious violations of the regime, (which they can easily falsify) they may address the court with a request that Kozlov be transferred to a stricter-regime prison”.

The Open Dialog Foundation hereby expresses its concern about the health andsafety ofVladimir Kozlov.  Only further close monitoring of this case by both Kazakh and international civil society can prevent thearbitrary exercise of power, now commited also by the prison administration.  Everyone who is willing to send their petitions and letters in support of Vladimir Kozlov, may direct them to the following address: