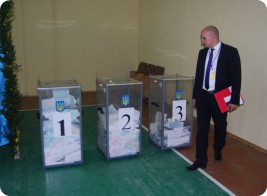 In the course of observation a few violations of the elections legislation were noticed, in particular:

To sum up, we need to say that this number of infringements in one constituency is evidently too many. However, we admit that none of these infringements is a gross violation of democratic norms. Secrecy of the ballot was provided everywhere, no attempts at falsification of the results were noticed. Each committee was composed of representatives from various political forces, and members of the committees monitored one another.

In the course of the elections was obvious bad logistic organization of the voting process which resulted in gigantic lines to the ballot boxes and ballot papers.

– too complicated and time-consuming procedure of issuing ballot papers to voters;

– too few election precincts in each constituency