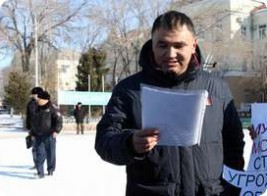 In Zhezkazgan (Karaganda Province), law enforcement authorities persecute an organiser of activist movements, the editor-in-chief of the ‘Molodyozhnaya Gazeta (‘Youth Daily’), Berik Zhagiparov, for his civic activities. After a protest action, held against the management of the of local town-forming enterprise ‘Kazakhmys’ by approx. 70 residents of the town on 9 February, 2013, Berik Zhagiparov was held for 7 days for organising an unsanctioned rally.

On 14 March, 2013, the Prosecutor of Zhezkazgan filed a lawsuit to suspend the operation of the ‘Molodyozhnaya Gazeta’ website for three months “for calling for an illegal rally”. Berik Zhagiparov does not agree with the position of the prosecutor and draws attention to the peaceful nature of the meeting: “The meeting was legitimate, despite the fact that the town administration did not authorise it. Kazakhstan has signed international instruments, in particular, the International Covenant on Civil and Political Rights, which provides for the right of citizens to hold mass protest actions”.

The lawsuit was filed by the prosecutor after Berik Zhagiparov held a press conference in Almaty on 19 February, 2013, and then, on 27 February, 2013, he wrote a letter to the Chairman of the Audit Committee, Aslan Musin, and to the presidential chief of staff, Karim Massimov. The journalist demands that attention be paid to corruption in the ‘Kazakhmys’ company: “Copper prices are much higher today than during the crisis, but still, management of the company has begun to secretly prepare mass layoffs, justifying it with the need to optimise production. Concurrently, social tensions in Zhezkazgan and the surrounding region are growing”.

Now, Berik Zhagiparov fears provocations against him as well as the fabrication of a criminal case.

On the night of 9 March, 2013, in Tastybulak village near Almaty, Nurlan Uteuliyev was assassinated. He was an activist of the environmental organisation ‘Tabigat’, and had fought against the illegal felling of ancient trees. Civil activists fear the fabrication of a case by the police.
Nurlan Uteuliyev’s relatives and colleagues, as well as the head of the Union of Muslims of Kazakhstan, Murat Telibekov, suggest that the activist was killed because of his civil activity. A few days before the murder, on 2 March, 2013, a skirmish took place between Nurlan Uteuliyev and loggers. The developer of the site and the district policeman threatened Nurlan Uteuliyev with revenge.

On 11 March, 2013, a cousin of the deceased was arrested on suspicion of murder, and he allegedly confessed to the crime. According to the Union of Muslims of Kazakhstan, no one is allowed to visit the accused, Dmitriy Zhabin which may indicate that he is being subjected to physical and psychological pressure. Relatives state that the deceased suffered a gunshot wound to the back, whilst according to the police, Nurlan Uteuliyev was shot in his chest.

Colleagues of the victim disagree with the version of the police and draw attention to the fact that the investigation was carried out very hastily, with no examination of witnesses and no operational activities at the crime scene.

On 13 March, 2013, Kazakh human rights defenders stated that the National Plan of Action for Human Rights in the Republic of Kazakhstan for 2009-2012 has been performed only to a degree of 22.6%.

Freedom of peaceful assembly and meetings

The General Prosecutor’s Office of Kazakhstan suggested the creation of special units of the Interior in order to prevent civil unrest during the strikes. Journalists and activists are concerned that, given the bitter experience of the Zhanaozen events of December 2011, special forces will not be used to ensure the safety of citizens, but rather to suppress mass protests.

The modernisation programme of law enforcement of the RK, publicised on 11 March, 2013, reads: “The history of recent rallies and strikes in Kazakhstan (Shanyrak, Zhanaozen) indicates the unwillingness of security forces to ensure the safety of citizens, including law enforcement officials. Now we are observing an escalation of the issue of forming special units in the police, whose only responsibility should be to ensure the enforcement of law during socially important events of both political and cultural nature as well as during rallies and strikes”.

Earlier, on 30 January, 2013, President Nursultan Nazarbayev demanded the strengthening of the role of the Armed Forces in securing political stability in Kazakhstan.

Let us remind ourselves that on 16 December, 2011, in Zhanaozen, Mangistau Province, the police used firearms to disperse a peaceful demonstration of oil workers of the ‘OzenMunaiGaz’ company and their families. Officially, the number of deceased as a result of the events of 16-17 December, 2011 was recorded as 17 people, casualties – 108. Social activists say that the number of citizens killed by the police was dozens of times higher than the official data indicate._

Freedom of conscience and religion

International human rights organisations have noted that the more rigorous ‘Law on religion’ restricts religious freedom in Kazakhstan. Recently, incidents of elimination of many religious communities, as well as confiscation and destruction of religious literature have become increasingly frequent. By their actions, the authorities violate the international obligations of Kazakhstan to respect freedom of conscience and religion.

Analysts have noted that the Kazakh authorities are striving to establish a fully controlled religious space. Protestants, Jehovah’s Witnesses, Baptists, Hare Krishnas, Ahmadi Muslims and followers of Sufism, which are considered by the authorities as non-traditional religious communities are the main targets for persecution. Of particular note is a ban on all Islamic literature, which is not in line with the Sunni Hanafi religion.

Recently, the Tatar-Bashkir mosque ‘Din Muhammad’ in Petropavlovsk faced the threat of liquidation. The authorities demanded that the leadership of the mosque preach only in Kazakh, but the multinational religious community insist that the sermons continue to be preached in three languages: Kazakh, Russian and Tatar, all the more so as religious law does not regulate the language of worship. On 20 February, 2013, the Specialised Interdistrict Court of North Kazakhstan Province handed down a decision to close the mosque. The trial took place in the absence of representatives of the mosque. On 6 March, 2013, an appeal, filed by the mosque against the lower court decision, was dismissed.

Previously, representatives of the Agency for Religious Affairs of the Republic of Kazakhstan have commented on the closure of the mosque ‘Din Mohammad’ in the following way: “We do not forbid praying, as we live in a democratic country. But if a court order to shut down the mosque comes into force, and they still continue to pray, they will be held legally responsible”.

In March 2013, high-profile trials held to prosecute members of the Christian Baptist Church were conducted in Kazakhstan. On 5 March, 2013, the Specialised Administrative Court of Burabay District (Akmola Province) handed down a decision to destroy religious literature (121 books), confiscated from a baptist, Vyacheslav Cherkasov, and the believer himself received a fine of 86,550 tenge (approx. 440 euros). Among the confiscated books was the Bible, the Bible for children and other brochures about the Christian faith, mostly in the Kazakh language. An official of the Ministry of Justice, Kulzhiyan Nurbayeva, stated that if the Appellate Court upholds the decision of the Court of first instance, the confiscated books will most likely be burnt.

A human rights activist, Yevgeniy Zhovtis, informed the Open Dialog Foundation that the legal procedure for the destruction of evidence applies to drugs or counterfeit goods, but not to religious books; perhaps, literature of an extremist nature could be destroyed if any at all. The human rights activist is certain that if the appellate court does not reverse the decision of the lower court, then the image of Kazakhstan as a country that guarantees freedom of conscience, will greatly suffer.

On 6 March, 2013, in Akzhaik District of West Kazakhstan Province, 12 people who were distributing baptist literature in the street, were arrested. Approx. 200 seized books were sent for examination in order to determine if they promote extremism.

Elimination of numerous religious communities has begun after the adoption of the law ‘On religious activities and religious organisations’ on 11 October, 2011, which ordered all religious communities in Kazakhstan to re-register in accordance with strict criteria within one year. As a result, a third of the religious organisations in Kazakhstan could not be re-registered: of the former 4551 religious associations, only 3088 are still in operation, and the number of recognised denominations has decreased by 60% – from 46 to 17.