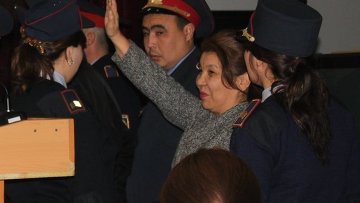 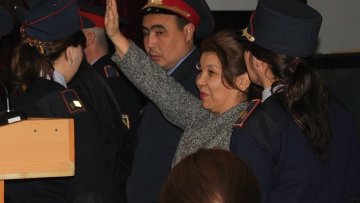 The health condition of one of the leaders of the oil workers strike movement in Zhanaozen, Roza Tuletayeva,currently residing in prison, is critical. This was confirmed in a statementby her daughter, Aliya Tuletayeva. In order to protest against the inaction of the colony management, Roza Tuletayeva has been forced to declare a hunger strike.

Roza Tuletayeva declared a hunger strike – information regarding which was disseminated on 22 April, 2013. Her daughter, Aliya Tuletayeva, has stated that her mother’s health condition has deteriorated recently: she was diagnosed with a benign tumor of the liver (hepatocellular adenoma). In addition, it was reported earlier that Roza Tuletayeva suffered from anemia, low blood pressure and pains in the spine. Now, Roza Tuletayeva is in urgent need of special treatment. However, the prison administration of the penal facility No. UG – 157/11, where Roza Tuletayeva is serving her sentence, does not even provide with basic health care. “She hasn’t been admitted to the medical unit, doctors haven’t been called to examine her, neither has she been given any medicine. My mother can’t walk, she has no strength to even stand during the head count. But she is violently pulled out into the hallway and forced ​​to stand in line”, – announced Aliya Tuletayeva. Having no other resort, Roza Tuletayeva has been forced to go on hunger strike.

This is certainly not the first case where political prisoners in Kazakhstan have complained about poor conditions of stay and a lack of proper medical care in prisons. In April, 2013, the Open Dialog Foundation reported a deterioration in the health condition of the convicted politician Vladimir Kozlov. Unfortunately, for various reasons, it is difficult to obtain objective information about the health condition of Kazakh political prisoners. International observers have repeatedly attempted to obtain permission to meet with convicted opposition activists and civic activists in Kazakhstan in order to assess their living conditions in prison, however, they are yet to receive official permission to do so.

A group of Polish lawyers representing the Polish Bar Counsil are currently paying an official visit to Kazakhstan. They submitted a request to the Ministry of Foreign Affairs of Kazakhstan to meet with the prisoners: Vladimir Kozlov, Vadim Kuramshin and Roza Tuletayeva. However, no response to the request followed from the Ministry of Foreign Affairs of Kazakhstan. Earlier, in February 2013, the Polish deputies: Tomasz Makowski and Małgorzata Marcinkiewicz requested permission to meet with Vladimir Kozlov in prison, but they were refused the possibility as well as a Polish Sejm deputy, Tadeusz Woźniak, who sought authorisation to meet with Vladimir Kozlov.

The Open Dialog Foundation hereby addresses the Kazakh authorities with a demand that necessary medical care be immediately provided to Roza Tuletayeva. We also demand that international observers be allowed to meet with her and other imprisoned opposition activists in order to objectively assess the conditions of their stay in prisons.

Roza Tuletayeva – a human rights activist; she was actively engaged in the protection of the rights of oil workers who went on strike in western Kazakhstan in 2011, protesting against unfair working conditions. During the trial of 37 oil workers, she repeatedly made statements about the use of torture, by means of which the investigating authorities were forcing interrogated people to confess.
On 4 June, 2012, the court found her guilty of organising mass riots (Article 241, section 1 of the Criminal Code of the Republic of Kazakhstan) during the Zhanaozen events of 16-17 December, 2011. She was sentenced to 7 years’ imprisonment to be served in a general regime penal colony. On 6 August, 2012, the appellate instance of the Mangistau Regional Court reduced her prison term from 7 to 5 years.