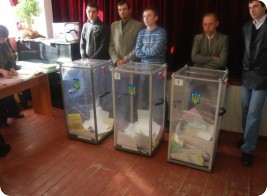 On 31 October 2010, a group of observers invited by the “Open Dialogue Foundation”, after having received accreditation from the Central Elections Commission of Ukraine, participated in a short-term observation of the voting process in the town of Drohobych, Lviv region.

The observers went to 9 polling stations out of 25 open in the city. It should be noted that during the mission the observers found no serious violations that could have significantly affected the election results. The observers were met with a warm welcome at most of the stations. Registration of observers in a special register was performed without reservations. The observers met no obstacles in performing their job. All the required information was provided without delays, all talks to committee members and inside observers were open and transparent. An important role in maintaining transparency of the voting process played the mass media and inside observers representing some of the candidates who were present at the stations. It is also worth mentioning that the number of registered observers sometimes reached a gigantic figure (up to several dozens), which caused problems for the election committee and created discomfort at the polling station.

These are the infringements and comments of the observers as to the voting process:

3) Presence of two people in voting booths at the same time. At all the covered polling stations there were situations when voters came in twos into the voting booths. In most cases it was immediately intercepted by the observers. At polling station No. 20 an observer was noticed to enter the voting booth together with a voter. He was reprimanded but said there was no reaction from the committee members and continued to “help” the voter. The same person was seen to openly offer his “help” to two other voters at the entrance to the station (yet only one case when he actually entered the booth with a voter was noticed).

4) At all 9 stations we noticed that voters were filling out the ballot papers outside the booths (for example, on top of ballot boxes). In most cases it was a result of long lines and cramped premises of the stations.

5) The observers were seriously worried about a long process of issuing ballot papers. A voter and a committee member had to put many signatures, and the voting procedure stretched out in time, which lead to long lines at the stations.

6) In the course of observation we noticed that despite legislative requirements some election campaign agitation materials for some candidates were not removed from the city. Yet, we should make a concession by saying that such regulation is almost impossible to comply with, and, further on, it should be limited by the ban on active campaigning during the agitation silence.

7) At the presidium’s table at polling station No. 19 there was an outsider, not a committee member, which is unacceptable even taking into account the fact that the person was a minor.

8) After closing the polling station, during the vote counting, some committee members repeatedly left the premises of vote counting. With the counting procedure taking over ten hours, it’s almost impossible to stay in one place for such a long time.

9) The vote counting process was from the start accompanied by a lot of fuss made by a group of observers who interfered with the committee’s work and engaged in lively disputes between themselves, often resulting in verbal offence. The election committee did not have any ready-made procedure for vote counting which had a negative effect on the work. It is the observers’ opinion that vote counting at local elections which lasts over ten hours is unacceptable (above all, from a physical endurance point of view) and needs to be replaced by improving the election legislation and better work organization.

10) Transparent ballot boxes in some cases do not guarantee the secrecy of the ballot.

As has been mentioned above, these infringements noticed in the process of voting hardly affect the election results directly. The most serious observations pertain to the pre-election period, when, for example, right before the elections the legislation was changed, which allowed the ruling party to have a larger representation in election committees than the opposition. Our superficial analysis and conversations with other observers showed that most heads of election committees were representatives of the same political environment. Besides, during the pre-election period, there were cases when candidates were unjustifiably denied registration and fake lists of the existing political parties were registered.

However, based on the observations, we would like to state that voting at the polling stations we visited took place without any flagrant defiance.

More on this topic:
election , Ukraine