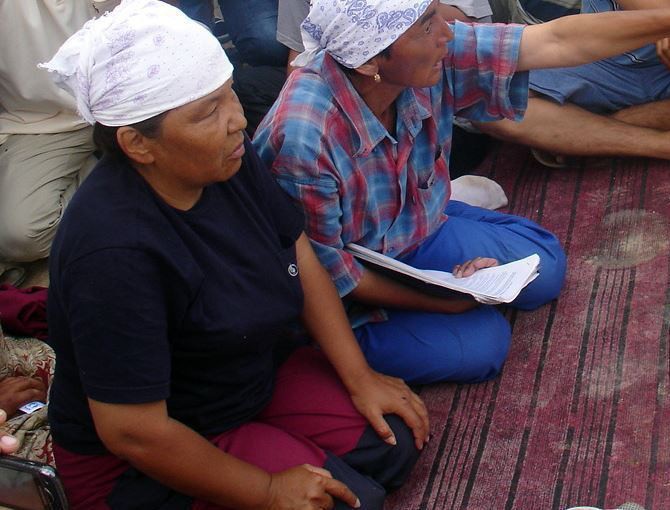 The government of Kazakhstan has been ignoring the demands of both the Kazakh and international community by failing to provide medical care to Roza Tuletayeva or publicise any objective data regarding the state of her health. Relatives of the convicted woman argue that in this way, the prison administration is exerting pressure on the activist of oil workers’ strike in Zhanaozen. 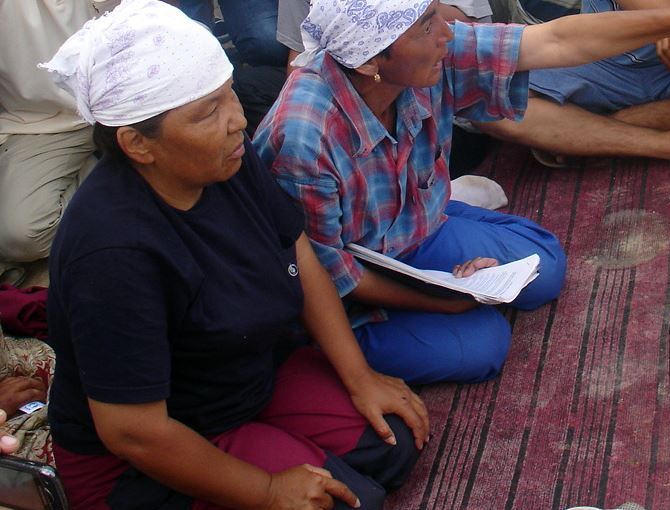 The health condition of Roza Tuletayeva continues to deteriorate, and both the administration and the head physician of the penal colony continue to deny her the opportunity to receive the necessary medical care. The activist’s daughter, Aliya Tuletayeva, announced that her mother is ill with chronic mastopathy, her blood pressure is low (80/50), she has a growing cyst, her eyesight is deteriorating and she is suffering from constant pains in the spine. On 22 April, 2013, in the colony, as a result of an ultrasound examination, Roza Tuletayeva was diagnosed with a benign tumour of the liver. The colony’s doctors informed Roza Tuletayeva that she needed to be examined two or three times a week. Wishing to draw attention of the colony’s administration to the state of her health, Roza Tuletayeva went on hunger strike.

On 22 April, 2013, the prison administration promised to arrange treatement for Roza Tuletayeva, and, consequently, she stopped the hunger strike. But instead of providing her with professional medical care, the colony doctors advised her to apply a warming ointment, commonly used for radiculitis. Last week (13-17 May, 2013), during an additional ultrasound examination, physicians in the colony confirmed the presence of a benign liver tumour. As reported by Aliya Tuletayeva, the head physician of the colony has ignored the recommendations of doctors and to date, has failed to provide her with the possibility to receive a full examination or prescribe her proper treatment.

Aliya Tuletayeva has also reported that the prison administration has not completely released Roza Tuletayeva from the obligation to participate in the head counts due to her severe illness, and, occasionally, they force her to stand in line and suffer unbearable pains.

On 26 April, 2013, Kazakh representatives of NGOs, as well as international human rights organisations: Amnesty International, Article 19 and Front Line Defenders appealed to the government of Kazakhstan with the demand that Roza Tuletayeva’s history of medical observation in the penal institution УГ (UG) 157/11 be provided for review. But so far, neither human rights activists nor Roza Tuletayeva’s daughter have received the medical report.  The office of the deputy chief of the colony, Nurzada Saghingaliyeva, categorically refused to issue any comments, or even give the management’s e-mail address; instead, they have suggested that a formal request for information be sent by fax. An activist, the head of the Atyrau non-governmental organisation ‘Arlan’, Maks Bokayev, expressed his doubt that the doctors of the colony have any reliable data on Roza Tuletayeva’s health condition. The Open Dialog Foundation managed to get a copy of Roza Tuletayeva’s medical certificate, issued in the colony on 5 March, 2013 and confirmed on 21 April, 2013. Physicians of the colony diagnosed Roza Tuletayeva with “chronic gastritis in the state of aggravation, hepatocellular adenoma and chronic cholecystopancreatitis”.

On 10 May, 2013, a Kazakh news portal, total.kz, revealed that Roza Tuletayeva was visited in the colony by a representative of the Citizen Oversight Committee, Asyltek Ispusinov. He disputed reports pertaining to the convict’s deteriorating health condition and stated that Roza Tuletayeva is in good shape. Moreover, the article quoted Roza Tuletayeva’s very own words: “I do not know who created this big stir. If there were any conflicts at all, they have all been resolved. I have no idea in whose interests this was”.

According to international standards, a denial of adequate medical care to a convict can be regarded as torture, inhuman or degrading treatment. By such actions in respect of Roza Tuletayeva, Kazakhstan is breaching its international obligations, in particular:

Furthermore, according to Article 22 of the UN Standard Minimum Rules for the Treatment of Prisoners, “sick prisoners who require specialist treatment shall be transferred to specialized institutions or to civil hospitals. Where hospital facilities are provided in an institution, their equipment, furnishings and pharmaceutical supplies shall be proper for the medical care and treatment of sick prisoners, and there shall be a staff of suitably trained officers”.

In the resolution on Kazakhstan of 18 April, 2013, the European Parliament called on the Kazakh government to release Roza Tuletayeva, convicted on the basis of vague criminal charges which may be perceived as politically motivated.

In connection with the increasing pressure on the oil strike movement activist, Roza Tuletateva, the Open Dialog Foundation hereby demands that the competent authorities of the government of the Republic of Kazakhstan:

We kindly ask all those interested in helping to address formal requests to the following addresses:

On 13 May, 2013, the supervisory board of the Supreme Court of Kazakhstan held a hearing in the case of 14 oil workers, convicted of organising and participating in mass riots in Zhanaozen.The collegiate organ made a decision to initiate regulatory proceedings in order to review the sentences.The final decision should be passed on 28 May, 2013. But even now, prisoner’s counsels and relatives expect that the majority of the convicts will be released or have their prison terms reduced.As stated by solicitor Gulnara Zhuaspayeva, at the preliminary hearing, a representative of the General Prosecutor’s Office of Kazakhstan concluded that the convicts have been incarcerated for more than 1 year and 3 months, and so it is necessary to reduce their sentences. According to the law of the Republic of Kazakhstan, a convicted person may be released on parole provided he has served at least one-third of his or her term. Consequently, 8 oil workers who were sentenced to three or four years in prison, have the chance of being released on parole.

As for Roza Tuletayeva, during the preliminary hearing of the Supervisory Board of the Supreme Court of the RK a statement was read out to her, in which she says that “she repents and regrets that the  riots took place in Zhanaozen on 16 December, 2011”. In her statement, Roza Tuletayeva requests that Art. 63 of the Criminal Code (“conditional sentence”) and Art. 65 of the Criminal Code (“exemption from criminal liability due to active repentance”) be applied in her case. The statement was signed on 25 February, 2013. Aliya Tuletayeva reported to the Open Dialog Foundation that her mother had written the statement under pressure exerted on her by solicitor Alken Dosbolov, who gave her an ultimatum: since other oil workers have written statements of repentance, she should also do so, otherwise no one will be released. Aliya Tuletayeva draws attention to the fact that her mother later declined the services of solicitor Alken Dosbolov.

Aliya Tuletayeva does not trust lawyers Gulnara Zhuaspaeva, Alken Dosbolov or Ardak Batyyeva and intends to file a separate supervisory appeal with another lawyer. But the court has decided to consider Roza Tuletayeva’s supervisory complaint along with other imprisoned oil workers, providing her with the services of public attorney Mitkhat Kaylyukov. AliyaTuletayeva doubts whether the Supreme Court will release her mother on 28 May, 2013.