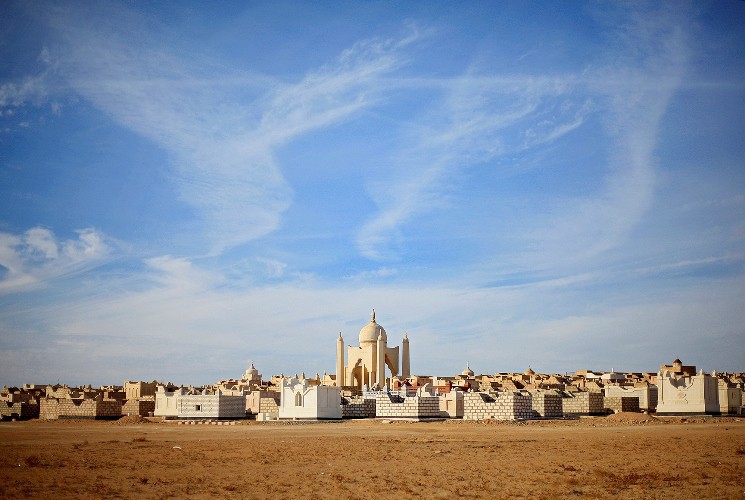 While the President of Finland, Sauli Niinistö was holding a meeting with Kazakh President Nursultan Nazarbayev in Astana, in Helsinki, journalists were making efforts to influence their leader. ‘Niinistö, do not forget about human rights’ – was the title of an article written by a Finnish journalist, Kukka Ranta, who managed to visit the Kazakh Zhanaozen. We have mentioned this publication before, and now, editors of the newspaper have kindly sent us a translated version of the article.

At the moment, the President Niinistö is visiting Kazakhstan at the invitation of the autocratic head of the republic, President Nursultan Nazarbayev.

China’s share in Kazakhstan’s oil industry is growing rapidly. If the influence of the EU as a trading partner weakens, the ability to influence the situation with human rights in the Central Asian republic will be also lost.

Throughout the last ten years, Kazakhstan has retained third place in terms of economic growth, falling behind China and Qatar, primarily due to vast oil deposits. Now there are attempts being made to expand the profile of the economy, but economic growth is threatened by the upcoming division of power.

Suffering from tumour, the 72-year-old Kazakh President Nursultan Nazarbayev has concentrated billions of dollars in assets in his inner circle. The older the ruler, the more aggravated the situation with human rights in the country becomes, as no practice of democratic and legal division of the branches of power exists.

In recent months, the Security Committee of Kazakhstan has openly threatened independent journalists and their families. According to the editor-in-chief of the ‘Respublika’ newspaper, Irina Petrushova, who has been accused of extremism, callers threatened that children of journalists will be the first to be harmed.

Like many other media outlets, ‘Respublika’ was closed in November 2012: in fact, in Kazakhstan no independent media currently exist. Prior to that, independent publications emphasised the autocratic powers of the president, corruption and mass shooting of oilmen.

In December 2011, hundreds of people were fatally shot  in the most important oil-producing centre of Zhanaozen on the Caspian Sea. The shooting was orchestrated in order to quell a many months’ long strike, which slowed down the pace of production. According to official reports, 17 people were killed. However, residents of the town claim that numerous bodies were hidden, and,  the number of casualties most likely reached one hundred.

Following the shootings, hundreds of people were detained and tortured; this means was applied in order to force them to give false testimonies. Opposition parties and independent media outlets were virtually destroyed. Many human rights activists fled the country, fearing for their lives.

The head of the most significant opposition party ‘Alga’ which has also been accused of extremism,, Vladimir Kozlov, is currently serving a term of seven and a half years’ imprisonment in the Kazakhstani ‘Siberia’. The working day in the colony begins at 6:00 a.m. Work continues until 8:00 pm. Kozlov has lost more than 5 kg in weight and does not receive necessary medical care.

The wife of Vladimir Kozlov, Aliya Turusbekova, is now in Europe, trying to ‘reach out’ to the governments with information about the situation in Kazakhstan and the fate of her husband. When in March 2013 Aliya visited Finland, she was threatened with imprisonment, and soon after that with “an accident with fatal consequences”.

The European Union and Finland are carrying out negotiations with Kazakhstan on the trade agreement. In November, the European Parliament, in accordance with a draft resolution prepared by Liisa Jaakonsaari, voted to break off the negotiations if the human rights situation in Kazakhstan continued to deteriorate.

Following this decision, Kazakhstan has focused on the organisation of bilateral meetings with heads of European governments to strengthen trade ties with desirable partners. Just this year, three Kazakh Ministers paid a visit to Finland.

In November 2012, the Minister of Foreign Affairs of Kazakhstan, Yerlan Idrisov, when commenting on mass executions for the Finnish media, explained that the tragic events were caused by the actions of ‘hooligans’.  However, in fact, they were mere pawns in the campaign of oppression.

According to numerous stories relayed by Zhanaozen residents, crowded trains transporting people dressed in work overalls arrived in town. As reported by the official Kazakh media, these people, in the eyes of the world and the Finnish press, were the very “strikers” and “thugs”, whom the police “justifiably” called to order. Thousands of genuine strikers kept the strictest discipline for months in order to achieve the improvement of their labour rights strictly by legal means.

International Trade Minister Аlexander Stubb paid a visit to Kazakhstan in October 2012. He was accompanied by the most numerous business delegation of all time. At the same time, Аleksandr Bozhenko was killed; he was a key witness who gave evidence in court on the use of torture by the police immediately after the mass shooting.

And now, President Sauli Niinistö, accompanied by his wife Jenni Haukio, a delegation of heads of enterprises, Minister of Economic Affairs, Jan Vapaavuori (the National Coalition Party) and a representative of the project entitled ‘A law abiding state in Central Asia’, a former president of the Supreme Court of Finland, Pekka Halberg.

On Wednesday, 17 April, a meeting between Niinistö and Nazarbayev will be held (the article was published on 16 April, 2013 – trans.), which is expected to cover the issues of bilateral relations between Finland and Kazakhstan, as well as the relations between the EU and the Central Asian republic.

China’s influence in the oil industry of Central Asia is growing rapidly. Unlike China, the European Parliament has demanded that the human rights situation in the region be improved. Without trade relations, it will become impossible to influence the observance of human rights, but if the requirement for the development of the law-abiding state isn’t articulated explicitly enough, Finland and the EU will in effect endorse the criminal actions of the Kazakh government.

Journalist Kukka Ranta covered this topic earlier in the article, ‘The kingdom of crude oil’ (‘Voima’ 2/2013). The article “People, get in order!”, co-written with Oksana Chelysheva, was published in the “Finnish Illustrated magazine’ (Suomen Kuvalehti) (10/2013). 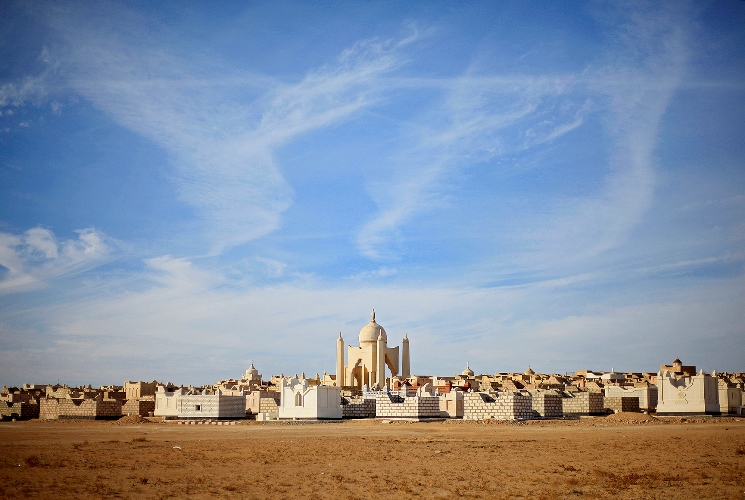 In the heart of an oil-rich desert, near the town of Zhanaozen, there is a Muslim ‘city of the dead’, where in October 2012, a witness, who testified about the use of torture by the police, was buried. Photo: Kukka Ranta. 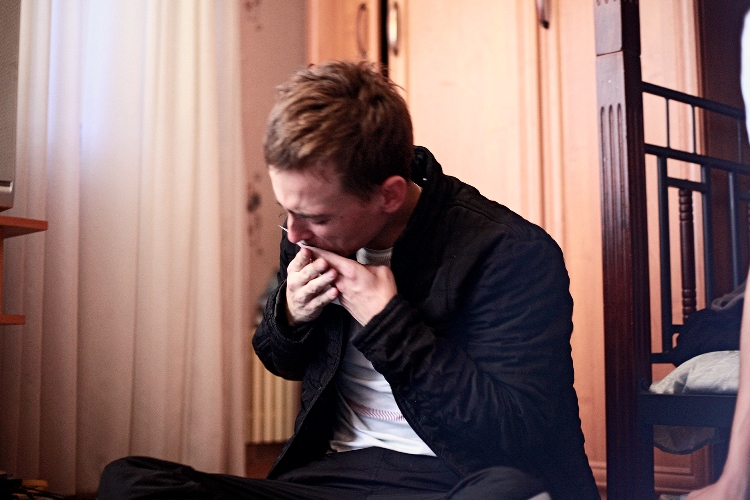 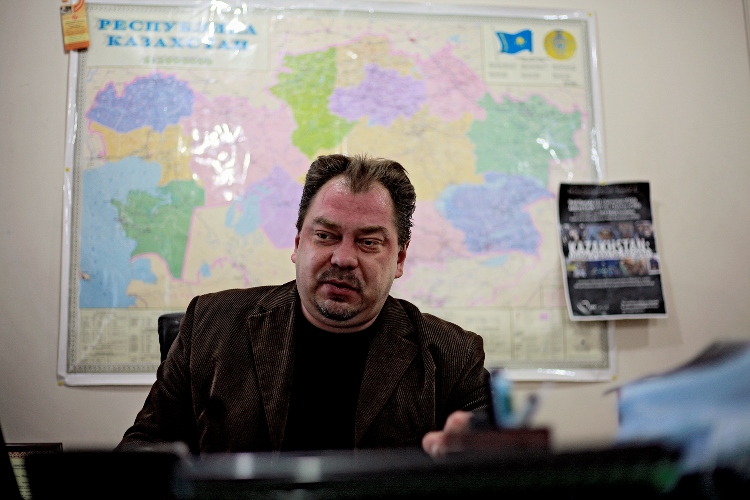 Mikhail Sizov took on temporary leadership of the largest opposition party in Kazakhstan, ‘Alga’, after its chairman, Vladimir Kozlov, had been taken into custody. Kozlov was arrested in January 2012, upon his return from a meeting of the Office of External Relations of the European Parliament, where he reported on the situation in Kazakhstan after the mass shooting. In October, Kozlov was sentenced to seven and a half years of corrective labour on charges of organising riots in Zhanaozen and making endeavours to overthrow the government of Kazakhstan. As a result of  his incarceration under difficult conditions in the penal colony in the Kazakh ‘Siberia’ Kozlov has lost 15 pounds (6 kg). Mikhail Sizov is seriously concerned about the safety of his family. 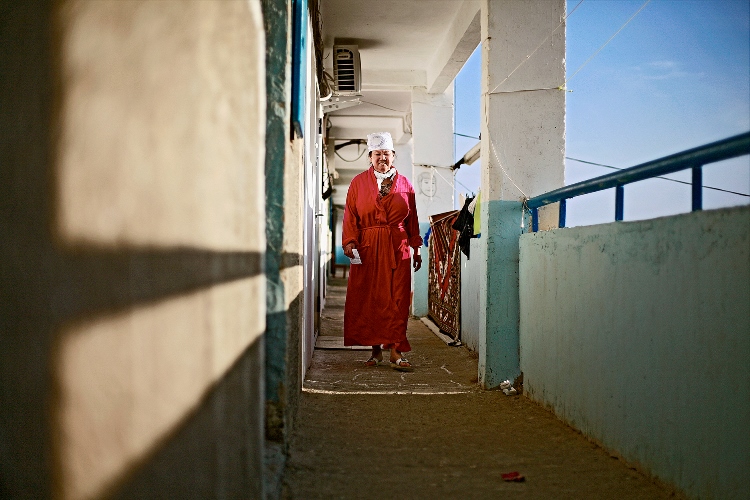 The husband of the 58-year-old Nuriyash Abdraimova participated in the strike. In total, it was attended by 15,000 people with the mass support of the town residents. Women who were preparing food for the strikers, met regularly in Abdraimova’s apartment. As a result, she is now fighting a court battle against the decision forcing her eviction from the apartment. 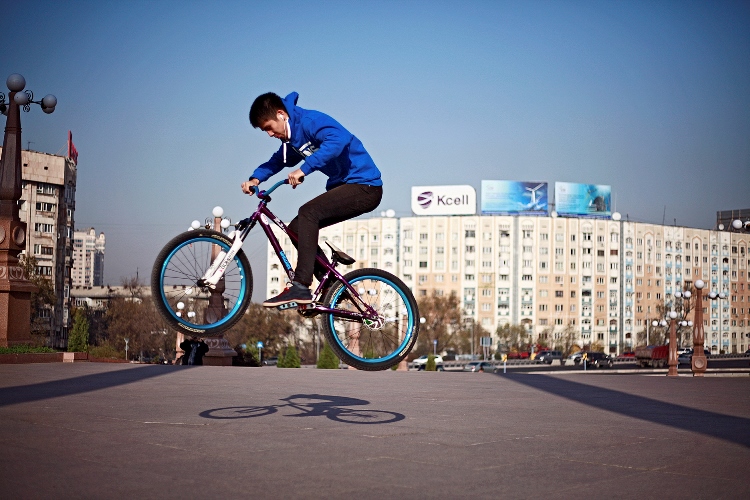 The telecommunication group ‘Telia-Sonera’ owns 61.9% of the shares of the largest Kazakh telephone carrier ‘Kcell’; before the transaction which took place in December, the share amounted to 86.9%. During the events in Zhanaozen, the telephone connection was blocked as a result of the introduction of the state of emergency. The connection provided by ‘Telia-Sonera’ was also disrupted.

The newspaper ‘Respublika’, whose acting deputy editor is Oksana Makushina, was accused of radicalism in November 2012. In December, the police closed down the editorial office, seized the equipment and threatened journalists with incarceration. ‘Respublika’ was the main press outlet of the opposition, and it provided objective coverage of the situation in Zhanaozen. Numerous journalists have been assaulted in the street, and as a result of the persecution, the paper has been forced to repeatedly change its name. When the publication was commencing its activities in 2002, at the doors of the editorial office they found a headless corpse of a dog, to the side of which a note was attached with a screwdriver. The note read: ‘Next time it’s going to be worse’. 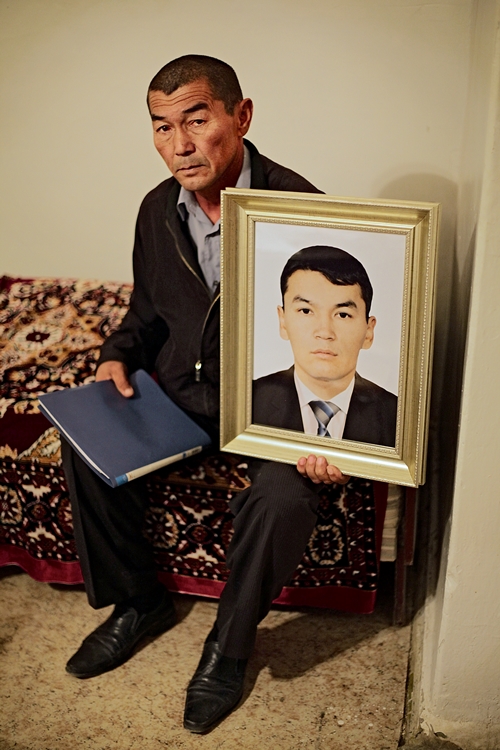 In Zhanaozen’s neighbouring village of Shetpe, the police opened fire on civilians at a train station. The 55-year-old Zhanibek Tolegenov is holding a photograph of his thirty-year-old son Torebek, who was killed by police fire. Torebek was a fireman and tried to calm the police officers who stood against unarmed civilians in full combat arms. The shooting lasted until nightfall. The father rushed to the hospital in his car in order to see his son; now, his car is bearing the marks of bullets. Subsequently, Torebek died of the injuries he sustained. 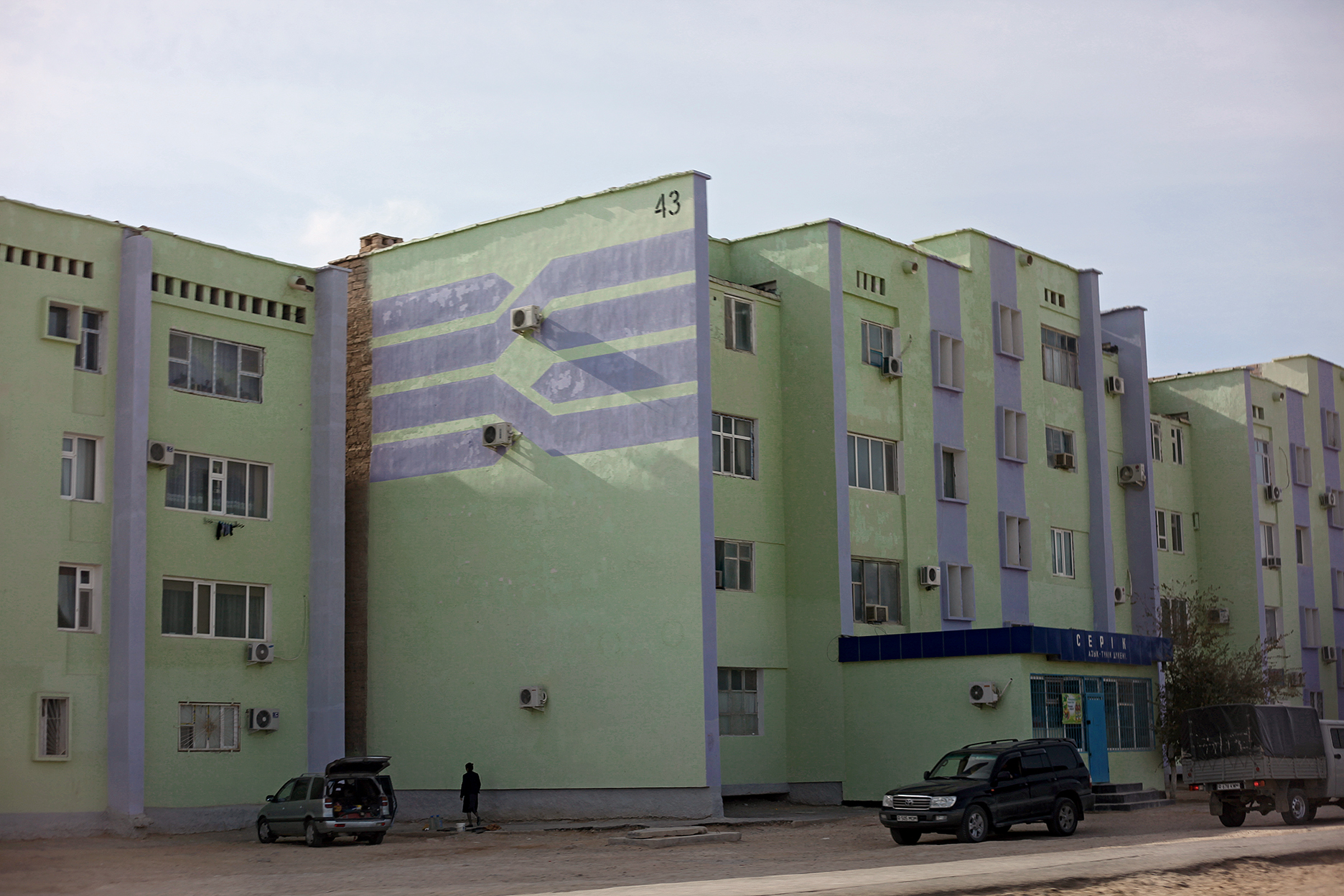 A few months after the shooting of strikers, houses along the main street of Zhanaozen were painted in ‘life-affirming’ colours. A year after the events, the streets are still patrolled by numerous policemen. Everywhere on the streets one can see an advertisement of a Finnish paint manufacturer ‘Tikkurila’. 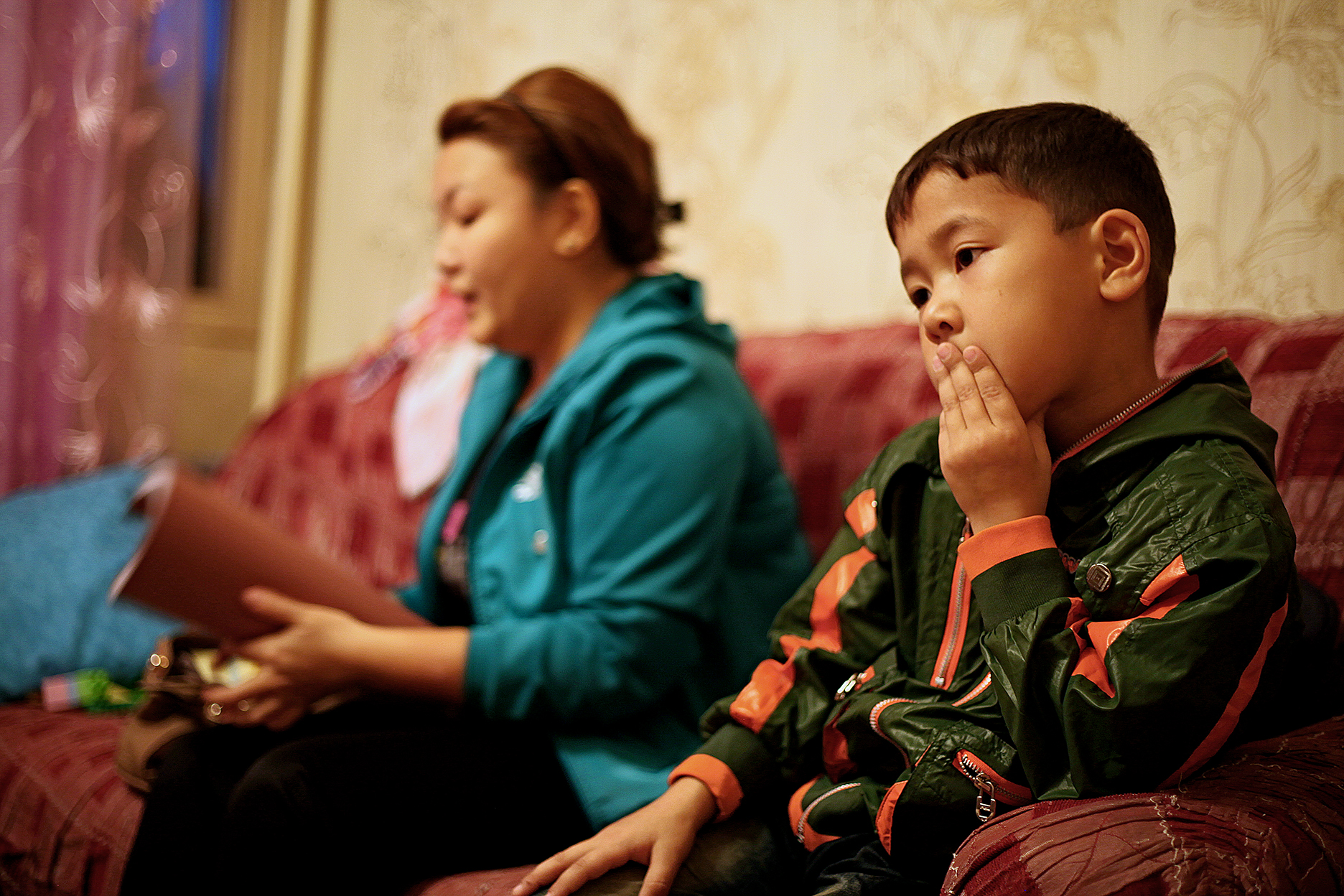 The mother of the 25-year-old Aliya, Roza Tuletayeva, was one of the leaders of the strike movement. Due to this fact, she is now serving a seven-year term of imprisonment. She was forced to give false testimony by a means of torture. Roza finally knuckled under pressure from the police when they threatened her daughters would be raped. A subdued seven-year-old Erbakhyt is already well aware of what happened to his grandmother.

These materials are provided by Fifi online magazine