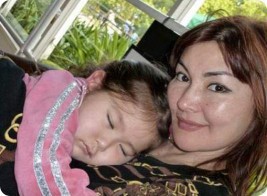 The wife and 6-year-old daughter of the disgraced Kazakh opposition leader, Mukhtar Ablyazov, were arrested during a special operation in Italy and deported to Kazakhstan. The deportation was carried out under gross violation of international standards. In Kazakhstan, the wife of Mukhtar Ablyazov faces imprisonment.

The Ministry of Foreign Affairs stated that the wife and daughter of Mukhtar Ablyazov were deported to Kazakhstan on the initiative of the Italian party: “The Consular Section of the Embassy of Kazakhstan in Italy has issued certificates, confirming the return of its citizens: Alma Shalabayeva and Alua Ablyazova to the Republic of Kazakhstan. The certificates were issued at the request of the Italian authorities which deported the aforementioned persons to Kazakhstan as a result of violations of the legislation of the Republic of Italy”. So far, the Italian Ministry of Foreign Affairs has not passed comment on the incident in any way.

Upon their arrival at the airport, on 1 June, 2013, Kazakh police officers served Alma Shalabayeva with a decision to institute criminal proceedings against her and transfer the case for preparatory proceedings on 30 May, 2013, which she refused to sign. The Department of the National Security Committee of Atyrau province charged Alma Shalabayeva with acts under Art. 325, sections 2 and 3 of the Criminal Code (“Forgery, manufacture or sale of false documents, stamps, seals, blank documents, state decorations”, committed repeatedly or by a group of persons upon prior conspiracy” and “knowingly using a forged document”). It seems particularly strange that the criminal case against Alma Shalabayeva is run by the National Security Committee of Kazakhstan. As a rule, the competence of the service is to investigate cases involving national security.

According to Mukhtar Ablyazov, his wife and daughter have been kidnapped. “I hereby announce that the kidnapping of my family has been organised on the orders of President Nursultan Nazarbayev. Previously a political opponent, he has now moved on to outright terrorism, i.e. taking hostages”, — Mukhtar Ablyazov stated.

Deportation from Italy was conducted under gross violations of international law

According to Art. 1 of Protocol No. 7 of the Convention for the Protection of Human Rights and Fundamental Freedoms, an alien lawfully domiciling in the territory of a State shall be allowed to: submit reasons against his expulsion, request a review of his case, and for these purposes to be represented before the competent authority or before one or more persons designated by that authority.

Thus, the deportation of Alma Shalabayeva and her daughter was conducted with the following noted violations:

1. The detainee was not permitted to seek the assistance of lawyers or an interpreter, thereby she was deprived of the right to appeal against her deportation and review the case. Furthermore, in accordance with Art. 10 of the Constitution of the Italian Republic, Alma Shalabayeva has filed an application for political asylum, but the officers in charge of her deportation refused to consider it.  As is well known, a person cannot be deported from the country pending the outcome of an application for asylum.

2. Italian law enforcement agency has not verified the legality of residence of Alma Shalabayeva and Alua Ablyazova in Europe. They were staying in Italy on the basis of an EU residence permit, issued by Latvia. In addition, Alma Shalabayeva has a Certificate which confirms she has no criminal record in the territory of Latvia.  The Italian authorities have not verified these documents or the authenticity of the Kazakh passports, which are now in the possession of the lawyers.

However, if one analyses the procedure for obtaining an emergency passport, as detailed on the website of the Embassy of Kazakhstan in Italy, in the case of issue of the emergency passports to the wife and 6-year-old daughter of Mukhtar Ablyazov, the legal procedure has not been observed:

4. There was a violation of Art. 3 of the UN Convention against Torture and Art. 19 of the Immigration Code of Italy, according to which the state should not extradite a person to another State where there are substantiated grounds for believing that he or she would be in danger of being subjected to torture or harassment based on race, language, nationality, religion, political opinion, personal or social conditions.

5. The short period of time over which the deportation was conducted is unprecedented. A former employee of the Foreign Ministry of Kazakhstan, Kazbek Beysebayev, argues that the procedure requires at least a week. At that, Kazakhstan did not submit a formal request for their extradition on the basis of the international arrest warrant. The wife and daughter of Mukhtar Ablyazov were expelled both by the decision of justice of the peace and the decision of the prefect of Rome on administrative expulsion. The counsels point out that such a procedure has been applied in Italy for the first time.  Alma Shalabayeva and Alua Ablyazova didn’t pose a threat to public order or national security in Italy, and so there was no reason for their immediate deportation.

Who  was the main target of the special operation?

The detention was carried out by the special forces unit of Italian police known as ‘Digos’, which specialises in investigation of the most high-profile and dangerous cases involving terrorism, organised crime, kidnapping and extortion. According to official accounts, Mukhtar Ablyazov wasn’t present, but his wife and minor daughter were detained.

It is noteworthy that the officials in Astana have not commented on the incident in any way for several days. The Ministry of Foreign Affairs issued a formal statement on 1 June, 2013, after the wife and daughter of Mukhtar Ablyazov had already arrived in Kazakhstan, announcing that they do not have any information regarding the arrest and extradition of Ablyazov’s family members. The department denied that they knew anything about the situation surrounding Alma Shalabayeva and Alua Ablyazova. Still, on the very same day, the state news agency of Kazakhstan ‘Kazakhstan Today’ reported that law enforcement agencies of the city of Rome deported Ablyazov’s family from the Republic of Kazakhstan on 31 May, 2013. In fact, if a lawful deportation were to take place, as claimed by the Kazakh authorities, it would have happened under the scrutiny of the Kazakh Foreign Ministry.

The urgency with which a criminal case was instituted against Alma Shalabayeva is somewhat troubling. She was detained on 29 May, 2013 and the criminal case against her was initiated on 30 May, 2013. The Kazakh party was interested in the swiftest possible deportation of the detainees to Kazakhstan. The period of validity of the emergency passports, issued in the Italian Republic, was due to expire on 1 June, 2013. The document was signed by the Consul of the Embassy of Kazakhstan in Italy, Yerzhan Yessirkepov, and its copy was served with Shalabayeva only upon her arrival in Kazakhstan. On the evening of 31 May, 2013, the detainees were sent to Kazakhstan. For this purpose, the Austrian company ‘Avcon Jet’ rented a private jet ‘Bombardier BD-100-1A10 Challenger’, which was flown to Italy for the special operation. According to available information, the estimated rental value of the aircraft is 400, 000 euros. On the way, Shalabayeva and the child were escorted by the consul as well as an employee of the Embassy of Kazakhstan in Italy.

On 3 June, 2013, Atyrau City Court No. 2 held a trial in the case of the issuance of Kazakh passports to Mukhtar Ablyazov’s family members. As a result, three former workers of the Migration Police were sentenced to 9 years’ imprisonment with confiscation of property for the acceptance of huge bribes. Another four clerks received suspended sentences or were amnestied. One gets the impression that the operation to arrest the wife and the minor daughter of Mukhtar Ablyazov was designed precisely due to the conclusion of the trial. It is on the basis of this case that the charges will be brought against Alma Shalabayeva who has never had any previous problems with the law.

From all these events, it follows that the main target of the special operation in the suburbs of Rome was none other than the spouse of Mukhtar Ablyazov and his six year old child.

Given the urgency and predictability of similar cases in Kazakhstan, Alma Shalabayeva will soon face conviction and imprisonment. Thus, the Kazakh authorities will have a powerful argument in the struggle with their most principled opponent – Mukhtar Ablyazov.

The Open Dialog Foundation hereby expresses its protest against the illegal deportation of the wife and minor daughter of Mukhtar Ablyazov, who can be used by Kazakh authorities to apply pressure to the main opponent of Nazarbayev’s re gime. Such methods of political struggle are unacceptable.

We hereby call on the international community to react to the illegal actions of the Kazakh authorities. You are requested to addressaformal appealtothefollowingaddresses: