Search
The Open Dialogue FoundationPublicationsKazakhstan: corruption in the country has led to a sharp increase in utility rates for the population

A rapid growth in utility rates has now become a concern of most Kazakh citizens. Monopolists explain the growth rates by the modernisation of infrastructure, but in reality the technology remains dated and dilapidated.

Since the beginning of the year, throughout many different regions of Kazakhstan there has been a sharp increase in utility rates. For example, the prices of hot water and heating bills in the Atyrau region have risen by 48%, in the city of Almaty – by almost 30% and in the West-Kazakhstan Region – by 25%. 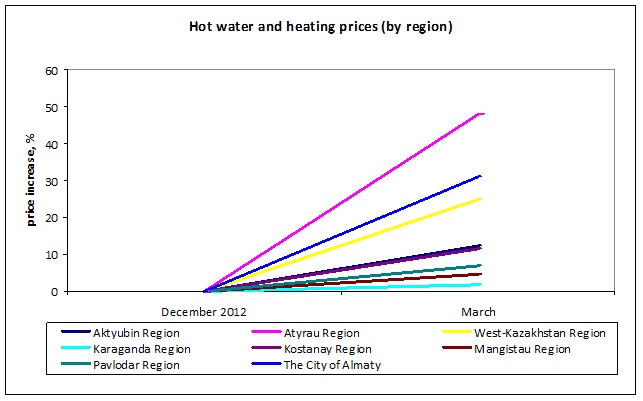 Electricity rates rose by the most  in the Kostanay Region (about 11%), East Kazakhstan, West Kazakhstan and North Kazakhstan regions (about 10%). 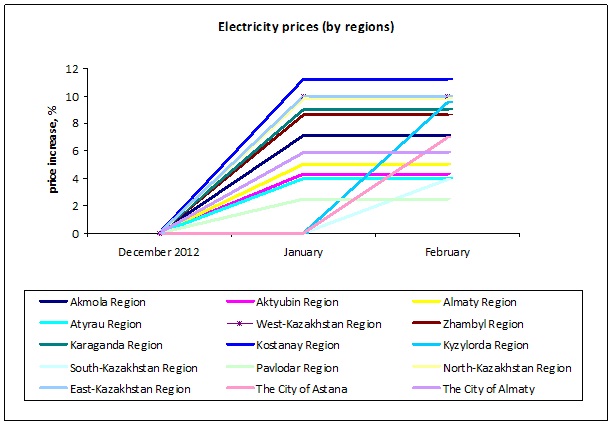 The fees for sewage disposal and drainage significantly rose in the city of Almaty (over 130%) and in the whole region (over 65%), as well as in the West Kazakhstan Region (90%). 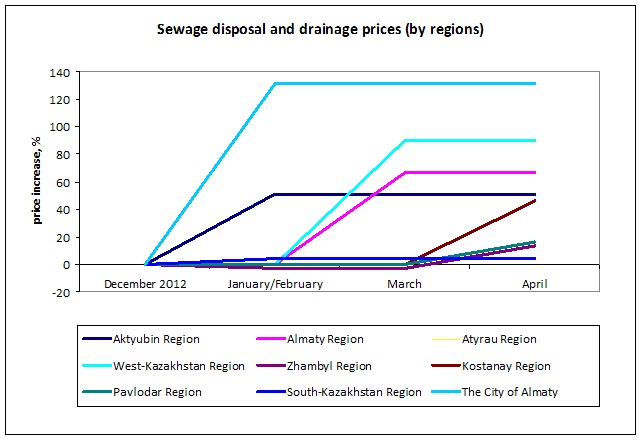 However, the biggest increase affected the provision of cold water, which in Almaty, Aktobe and West Kazakhstan Regions rose by almost 90%, and in Zhambyl – by almost 73%.

An increase in gas prices affected West Kazakhstan (by about 30%), Mangistau (depending on the region from 1 to 24.5%) and Kostanay (by about 15%). 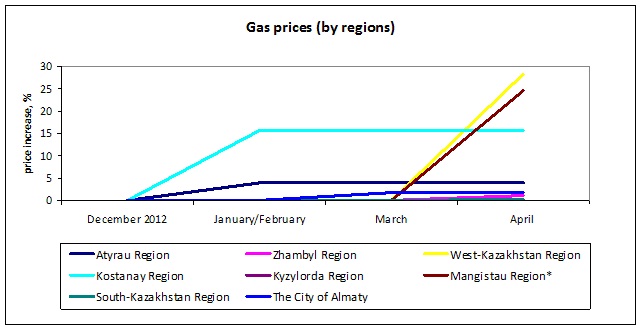 * In Mangistau Region, gas rose in price depending on the region (from 1 to 24.5%). In the chart, the maximum rate is used.

The inflation rate in April 2013 was 2.2%. The above charts show that the growth in rates is significantly ahead of this figure. Petr Svoik, a member of the Expert Council on Rates Formation of the National Economic Chamber of Kazakhstan, the “Atameken” Union, argues that this situation poses a direct threat to the balance between the national supply and demand.

Inflation and price increases offset the rise in wages, therefore, the purchasing power of Kazakhstan citizens is reduced: almost half of their income is spent on food. Only in March 2013, food prices for the main groups of products increased by 4.7% compared to the same period last year (in particular, flour rose by 13.1%, pasta – by 10.7%, fruit and vegetables – by 8.7%). On 08.04.2013 16 human rights organisations addressed the Government of Kazakhstan with a demand to stop the hike in utility rates, as it will lead to poverty and social tensions.

Analysts of EurasiaNet from New York have reported an increase in the social gap between the rich and the poor in Kazakhstan, while revenues from natural resources are concentrated in the hands of a few clans that are close to the President. On 10.04.2013, at a meeting with the Council of Entrepreneurs under the President of Kazakhstan, Nursultan Nazarbayev declared that 1.5 million people in Kazakhstan have a monthly income of less than 15 thousand (EUR 76), and 9 million people (55.6% of the population ) receive up to 36 thousand (EUR 183) per month. Therefore, given that according to official statistics the average monthly income amounts to 98,736 Kazakhstani tenge (500 euros), the income gap between the rich and the poor is very high.

Of the 52 countries whose total GDP constitutes 90% of the gross world product, Kazakhstan holds the second place in terms of wealth (according to a study carried out by the German insurance company Allianz Global). Personal wealth of the average citizen of Kazakhstan is estimated for 539 euros (for comparison, the Swiss citizen has 207 thousand euros, while the Lithuanian citizen – 1.4 thousand euros) . The subsistence wage calculated in the budget of Kazakhstan (18,660 tenge – 92 euros) corresponds to the subsistence wage of the poorest countries in Africa, – states the member of the lower house of parliament Dariga Nazarbayeva, the daughter of the President of Kazakhstan.

The increase in utility prices also affected the interests of small and medium-sized businesses which consume a lot of resources. For example, in Kazakhstan, there is a system of maximum rates for water, for which the price is formed depending on the volume of consumption, so the increase in water prices severely affected the major consumers.

The increase in rates for utility services rapidly breeds a mood of dissent in  Kazakh society, but in most cases, government agencies hinder the organisation of rallies and meetings. On 20.03.2013, the representatives of associations of people with disabilities in the city of Almaty said that the local administration banned a rally in the center of the city, offering a less crowded place behind one of the cinemas. Disabled people are perturbed by the fact that a class 1 disabled person receiving an allowance of 24 tenge (123 euros), has to pay 56 thousand tenge (287 euros) for public services.

On 28.03.2013 and 05.04.2013 in Uralsk (West Kazakhstan region) several dozens of entrepreneurs joined spontaneous demonstrations against the increase in utility rates. As a result of this action, the utility providers decided not to raise the heating price by a factor of 3.5, and the new mayor of the city said that prices will rise by only 25%. Later it became known that the local administration had prohibited civil activists from holding a rally on 27.04.2013,  one of the issues sparking the protest was the raise in utility rates. In Atyrau (Atyrau Region) on 27.04.2013 a rally against the rates increase was also banned. On 27.04.2013, Almaty hosted another such meeting. One of the organisers of the protest, Tazabek Sambetbay, believes that further protests are the result of increased social tensions in Kazakhstan.

On 10.04.2013, the analysts of the Kazakhstan Institute of Political Solutions published a report stating that “the number of social conflicts is gradually reaching a critical level”. The experts claim that the government understands the need to reduce social tensions, but “instead of introducing systemic and preventive measures, the actions taken by the state in the social field are still mostly of a situational nature”.

By raising prices, natural monopolies are abusing their position

Despite the dissatisfaction of the public, President Nursultan Nazarbayev supports further increases in rates, since it “will force people to save”. State experts believe that the wasteful consumption of resources is a consequence of the ageing infrastructure, so additional funds for modernization need to be raised from the population. Thus, the Chairman of the Agency for Regulation of Natural Monopolies Amanzhol Alpysbayev said that the main reasons behind the increase in water and sanitation prices  is the increase in the cost of electricity, as well as the reconstruction of water supply systems.

According to the Minister of Environmental Protection Nurlan Kapparov, within 20 years, 70% of power stations will need to be upgraded, otherwise they will become obsolete. In addition, 63% of all heating and water supply systems will need to be replaced or repaired, since due to their failures, 17.5% of the heat released is lost. According to the Agency of Statistics, the leakage in water supply systems and unaccounted expenditure make up a third of the volume released.

The government regularly provides grants for monopolies for the development of housing and utility services, but 60-70% of the infrastructure remains dilapidated, which casts doubt over the effective use of the consumers’ money by the monopolies, and on the control of the government over this process. It is noteworthy that the increase in rates mainly affected the types of services that are dominated by state-controlled monopolies.

According to Peter Svoik, power stations include expenses not related to the production of electricity in the rates, and later use the funds received from the rate payers to pay billions of dollars in dividends to their shareholders or for bank deposits. In January 2013, the Agency for Protection of Competition and the General Prosecutor’s Office found that the power companies used the money obtained from the rates increase in the amount of 2 billion tenge ($ 10 million) for  payment of dividends to their shareholders as well as for festive and cultural events. Another example of abuse is the fact that in some cities, heating was not turned off along with the arrival of warm weather, as monopolists were interested in generating millions in profits from the fees charged for their services.

According to the data provided by the Audit Committee of the Republic of Kazakhstan, the State program on rates policy and competition for 2010-2014 is being implemented ineffectively. Due to the lack of state control over the way the monopolies allocate funds for modernisation, 2.2 billion tenge ($ 11.3 million) was lost. Still, the costs for the implementation of the modernisation programs are accepted as the basis for the calculation of rates. In addition, there was insufficient control over the execution of the program on promotion of competition, improvement of the transparency of local executive bodies, reduction of administrative barriers and the creation of the necessary infrastructure.

The Audit Committee recommended the General Prosecutor’s Office verify compliance with the law on natural monopolies in approving the rates for electricity and heating from 2008 to 2012; furthermore, it recommended the Ministry of Justice check Kazakh legislation on natural monopolies for the presence of the provisions inducing corruption, the Agency for Regulation of Natural Monopolies and Protection Competition – to correct violations and to hold those guilty responsible. The experts from the Institute of Political Decisions also argue that a lack of public funding for the sector and ineffective control is a systemic problem, which leads to higher prices for utilities.

The increase in utility rates in Kazakhstan is substantially ahead of the inflation rate and per capita income. The lack of public information, and hence lack of control over the use of subsidies and payments from citizens, lead to the settling of funds for modernisation within the monopolies and to the vague formation of rates. Instead of eliminating the abuse of monopolies and eradicating corruption in the use of public funds, the state shifts the compensation of financial loss fully on to consumers. The government also carries out other unpopular reforms: a reduction of maternity benefits for women with high wages and the raising of the retirement age. Considering the low standard of living of the average citizen of Kazakhstan, this situation may lead to social revolt.