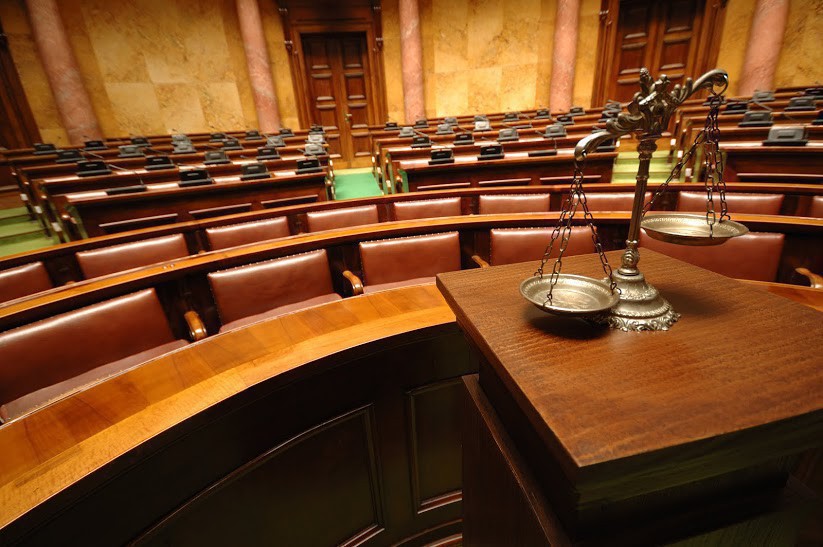 The decision of the Supreme Court on the Zhanaozen case: the right to a fair trial in Kazakhstan is not respected

The Supreme Court of the Republic of Kazakhstan has released 6 oil workers from custody, who were convicted in the Zhanaozen case. However, the court upheld the sentences of the remaining prisoners, ignoring numerous statements on the use of torture against them by the investigating authorities.

Kazakh and international independent observers at the court hearing

On 28 May, 2013, the Supervisory Board of the Supreme Court of the RK made a ruling in the case of 14 oilmen, convicted of the organisation and participation in mass riots in Zhanaozen and calling to defiance of public officers’ instructions (Art. 241, sections 1, 2, 3 of the Criminal Code of the RK).  The supervisory review proceedings were opened in the cases of 13 persons, sentenced to prison terms ranging from 3 to 7 years, and one conditionally convicted oilman (Sisen Aspentayev), who requested that his criminal record be rescinded. As a result, in relation to oil workers, condemned to three years in prison, the Supreme Court decided to reduce their sentence to two years’ probation (pursuant to art. 63 of the Criminal Code). Thus, Marat Aminov, Nurlan Askaruly, Zharas Besmagambetov, Murat Kosbarmakov, Bauyrzhan Nepes, Kairat Edilov were released from custody. The Supreme Court upheld the sentences of the remaining oil workers, including the strike movement activist Roza Tuletayeva.

The court session was attended by the following Kazakh and international independent observers:

Unfortunately, no observers from the OSCE or USA were present at the trial.

The court session was open to the public. Still, the police thoroughly searched independent journalists, Kazakh and international observers, and demanded that they surrender all recording devices, cell phones, cameras and computers. At the same time, journalists of state television channels ‘Kazakhstan’ and ‘The First Channel ‘Eurasia’ were permitted to enter the courtroom with video cameras and recording devices. Independent observers protested against this policy of double-standards, but the police did not respond to their remarks.

The Supreme Court ignored the incidents of torture and the presence of mitigating circumstances in relation to the oil workers.

Gulnar Zhuaspayeva drew the attention of the Supreme Court to the fact that the courts of previous instances had refused to institute a criminal case on charges of torture, suffered by the defendants at the time of the investigative activities. The charges presented by the investigators were formed on the basis of the testimony of Tanatar Kaliyev, who later renounced his statement on 11 April, 2012, stating that he had given it under the pressure of torture: “The interrogations were held under conditions of tremendous physical and psychological pressure, I was beaten in the head with a stool, my oldest son was threatened with problems. When they began to interrogate me, I was trying to tell the truth, saying that none of the defendants were involved in the riots… The interrogations were carried out day and night, they wouldn’t let me sleep. Legal representation was not provided”.  The Supreme Court did not reduce the sentence with regard to Tanatar Kaliyev who had been sentenced to 4 years in prison. It is worth noting that, in the proceedings before the court of first instance, 22 oil workers, including the activist Roza Tuletayeva, made a statement on the use of torture by the police. Still, the forensic examination confirmed the use of torture only in the case of Maksat Dosmagambetov, whose sentence of 6 years’ imprisonment has not been altered.

In addition, the counsels noted that the court of first instance did not summon for examination any complementary witnesses, as was requested by the defence.

Roza Tuletayeva requested that the court apply Art. 63 of the Criminal Code (‘conditional sentence’) in her case in connection with the presence of mitigating factors: poor health, minor children, who were left without support. When we asked: “Why didn’t the court take into account the existence of mitigating circumstances?” the counsel Gulnar Zhuaspayeva replied that it would be best to ask the court about it. However, the human rights defender Asel Nurgaziyeva and civil society activists: Zauresh Battalova and Rysbek Sarsenbayev expressed their regret about the fact that, due to conflicts between the lawyers, Roza Tuletayeva was left without a counsel and was not released from custody.

The reaction of independent observers to the Supreme Court’s decision

Charges brought against oil workers did not give grounds for imposing such strict sentences. For example, Sisen Aspentayev was shot by the police and was in a serious condition for more than 10 days, after which time he was taken from the hospital and received a suspended sentence. Human rights activist Galym Ageleuov considers that the actions of some oil workers could have been qualified not as criminal, but rather as administrative offences. For example, Kairat Edilov was walking with the flag of the Republic of Kazakhstan and inadvertently struck a video camera with it, Nurlan Askaruly broke a glass window on the bus. In addition, the convicted oil workers wrote statements of repentance. On 16 January, 2013, during the cassation trial, the counsel Alken Dosbolov stressed: “The defendants asked for a pardon not because they recognised that they had committed wrongful actions in Zhanaozen on 16 December, 2011, but because they regret the fact that these riots took place”.

Civil activist Zauresh Battalova believes that the court decision was convenient for the government: oil workers have not been acquitted, and, thus, the authorities evaded assuming the responsibility for the Zhanaozen tragedy. The human rights activist Asel Nurgaziyeva notes that six oil workers were able to be released regardless of the decision of the Supreme Court. According to Art. 70 of the Criminal Code of the RK, after serving one-third of the sentence, a person who commits a minor or moderate crime is eligible for parole.

Relatives of the oil workers were not present at the supervisory review hearing. Journalist Zhanar Kasymbekova managed to contact Dinara and Aino, the wives of Maksat Dosmagambetov and Tanatar Kaliyev, which were aggrieved to hear that the Supreme Court did not release their husbands. They announced that they were very disappointed, just like those women whose husbands received a suspended sentence because they expected that all oil workers would be released. All convicted oil workers were the sole breadwinners in the family.

The counsel Gulnar Zhuaspayeva stated that she is prepared to write a complaint to the UN Committee on Human Rights, if her client, Sisen Aspentayev expresses such a wish. According to the lawyer, on the basis of this case, the UN Committee may rule a general verdict against Kazakhstan with regard to the use of torture during the investigation and the legality of court sentences: “I knew that the domestic courts wouldn’t solve anything, and I knew that this matter should be brought to the UN Committee. But the authorities are not interested in taking such a case outside Kazakhstan”.

The Open Dialog Foundation hereby expresses its deepest regret with the fact that courts at all levels of the Republic of Kazakhstan do not provide a fair trial, and defendants are often denied an opportunity to defend their rights. Today’s judgment confirms that Kazakhstan is not ready to introduce drastic changes in order to promote democratisation, the independence of the judicial system and improvement of the human rights situation.

Since the tragic events in Zhanaozen marked the beginning of a new wave of oppression against civil society activists, members of the opposition and the independent media, the Open Dialog Foundation hereby emphasises the need:

for the Government of the Republic of Kazakhstan – to take into account the recommendations of the European Parliament and of the United Nations High Commissioner for Human Rights Navi Pillay by providing a comprehensive and impartial investigation into the events in Zhanaozen with the participation of the international community.

for the OSCE Office for Democratic Institutions and Human Rights – to carry out continuous monitoring of fulfillment by the Republic of Kazakhstan of its obligations due to its membership in the OSCE, promptly responding to incidents of gross violations of human rights in Kazakhstan.

The political will of the government of Kazakhstan is a crucial factor in the release of the Zhanaozen strikers. Therefore, we hereby call upon international human rights organisations and the governments of the democratic countries of the European Union to support our demands in appeals to the following representatives of the authorities of Kazakhstan:

On 16 December, 2011, in the town of Zhanaozen, Mangistau Province, the police dispersed a peaceful demonstration of oil workers of the OzenMunaiGaz’ company and their family members. The police opened fire on peaceful citizens and minors, also with the use of automatic weapons (AKM-47); as a result, at least 17 people were killed and 108 – injured, according to official data. However, civil society activists and independent journalists claim that the death toll reached 70 with between 500-800 people wounded. On 4 May, 2012, at the court trial, the police officers stated that during the riots in Zhanaozen unregistered weapons were issued to them without a receipt. Half of the weapons have not been returned to the armoury. On 28 May, 2013, the General Prosecutor of Kazakhstan, Askhat Daulbayev, confirmed that no weapons, seized during the riots in Zhanaozen, were registered in the cartridge case repository of the Ministry of Internal Affairs of Kazakhstan.

Based on the statement of the Prosecutor’s Office, it can be argued that the oil workers did not actively participate in the massacre. In his official appeal, the General Prosecutor’s Office announced that the riots began with “hooligan actions of a group of young people and the dismissed oil workers who succumbed to the influence of the former”. Also, “the hooligans used the strikers as a battering ram and broke through a police cordon”.

37 oil workers faced criminal liability on charges of organising and participating in mass disorder, and only 3 of them were acquitted. 13 oil workers were sentenced to prison terms ranging from 3 to 7 years, 16 people were sentenced to 2 to 3 years’ probation and 5 were pardoned. During the trial, the prosecution repeatedly applied the practice of classification of witnesses, who were presented by nicknames and gave their testimonies via Skype with the use of voice modifiers. International observers revealed incidents of repeated physical and mental violence against the detained oil workers, in particular: battery, suffocation, threats of rape and harm causing to family members.