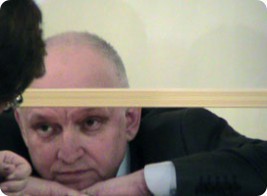 Vladimir Kozlov’s case: the date of preliminatory review of the supervisory appeal has been publicised

06.05.2013 the Supreme Court of the Republic of Kazakhstan received a supervisory appeal, submitted by Venera Sarsembina, the counsel representing the interests of Vladimir Kozlov.

21.06.2013 the attorney received an official notice from the Supreme Court of the Republic of Kazakhstan, confirming that the preliminary review of the motion had been scheduled for 24.06.2013. The notice stated that it had been sent 7 days previously, i.e. on 14.06.2013. Thus, had the delivery of the notice been delayed by another couple of days, the preliminary consideration could have taken place without the necessary legal representation. Venera Sarsembina promptly went to buy tickets in order to be able to participate in the court session, but on the same day (21.06.2013) she received a phone call during which she was informed that the preliminary consideration of the appeal had been postponed until 01.07.2013.

As stated by a member of the international committee «Zhanaozen-2011», Yerlan Kaliyev, the postponement of the preliminary consideration of the appeal indicates the absence of a final political decision with regard to Vladimir Kozlov’s sentence.

According to the legislation of the Republic of Kazakhstan, it is on the basis of the results of the preliminary review that the court will rule on whether or not to institute legal proceedings for a judicial review of the disputed sentence. If it is decided to institute the review proceedings, the sentence against Vladimir Kozlov will be reviewed. However, even if the review proceedings are instituted, this will not guarantee that the judgement of the court of first instance will be overturned.
The Open Dialog Foundation hereby calls on the international community to exert pressure on the authorities of the government of the Republic of Kazakhstan and to delegate observers in order to ensure a fair trial in Vladimir Kozlov’s case in the Supreme Court of the Republic of Kazakhstan. Please direct your appeals tothefollowingaddresses:

08.10.2012, Vladimir Kozlov was sentenced to 7.5 years’ imprisonment with confiscation of property on charges of organising the riots in Zhanaozen and calling for an overthrow of the constitutional order. The appellate and the cassation courts upheld the conviction.