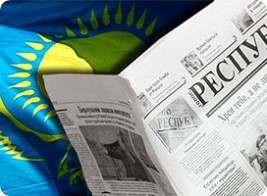 Once again, the attempts of the independent Kazakhstan media – «Vzglyad» and «Respublika» newspapers to defend their rights to exist in court and operate within the territory of Kazakhstan were in vain. The court rejected their cassation appeals. International organisations continue to register a decline in the level of freedom of speech in Kazakhstan.

28.05.2013, the Appeal Board of the Almaty City Court considered the appeal of the founders of the «Vzglyad», «Aina» LPP and «News Press Almaty» LPP newspapers against the decision of the Bostandyk District Court of Almaty of 20.12.2012 to cease publication of the «Vzglyad»  newspaper and its online resources throughout the territory of the Republic of Kazakhstan. The interests of the owners of the newspaper in court were represented by lawyers Amangeldi Shormanbaev and Ganna Krasilnikova.

The defence disagreed with the decision of the trial court, justifying its position with the following arguments:

The defenders of the «Vzglyad» newspaper appealed to the court with a motion to reverse the decision of the Bostandyk District Court of Almaty of 20.12.2012 to stop publishing the «Vzglyad»  newspaper and appoint a new trial. The Appeal Board of the Almaty City Court dismissed this appeal.

This decision of the Appeal Board did not surprise the lawyer Ganna Krasilnikova: «All processes were carried out with gross violations of the law. But we have to go through all the instances and then apply to the Human Rights Committee of the UN and at least receive come recommendations that will be useful to Kazakhstan in the future».

06.06.2013 the Almaty City Court considered the cassation appeal of the founders of the media, united by a state charge into a «one media outlet «Respublika».

The defence lawyers were Sergei Utkin and Tamara Simakhina. Once again, they tried to prove to the Appeal Board the illegality of the lawsuit against the «one media outlet «Respublika»:

Firstly, according to the defence, the court should not have satisfied the prosecutor’s motion to recognise a number of independent media as «united», since a means by which rights can be protected does not exist in law – it is not allowed to try several media as “one media outlet” based on the assumption that they have one owner (Article 150 of the Civil Procedure Code of the Republic of Kazakhstan).

Secondly, the lawsuit was originally filed against the subject of civil rights. The court acknowledged that the media are the subjects of civil rights. According to lawyers, this approach is fundamentally flawed. «The media have owners. But the media themselves are not even an organisation. We want the decision on the case to be reversed and the prosecutor’s claim to be denied. If he considers the media to be extremist, he needs to proceed in the manner prescribed by law, and only then can the paper be closed down» – said Sergey Utkin.

The defenders of the independent media, united by a state charge as the «one media outlet «Respublika» also focused their attention on the fact that the defendant’s guilt was not proven at the court hearing.

At the trial, the court applied the principle of res judicata – used the text of the court’s decision in the criminal case against the politician Vladimir Kozlov, according to which the newspaper had published materials aimed at inciting social discord. This fact was accepted as a fact and was not subject to examination in the trial against the media. Moreover, all the motions filed by the defence to conduct examinations and investigations were rejected. Thus, the defence had no opportunity to prove its innocence, in other words, was deprived of its constitutional right to a defence.

Despite the convincing arguments of the defence, the cassation appeal was rejected, which was quite predictable. The court decided to uphold the judgment of first instance.

It should be noted that the lawsuits against the largest independent Kazakhstan media organisations and, as a result, their ban on the territory of the country, contributed to the lowering of Kazakhstan’s international ranking of in the field of freedom of expression.

Thus, in the rating of the «Reporters Without Borders» organisation for the first quarter of 2013, Kazakhstan fell by 6 positions and ranked 160 out of 179 countries. In its report, the organisation noted that the political regime in Kazakhstan is moving closer to an ultra-authoritarian model, in which the neighboring countries Uzbekistan and Turkmenistan are entrenched. In addition, in May 2013 «Reporters Without Borders» included Nursultan Nazarbayev in the list of the enemies of the press, along with other leaders of the former Soviet Union – Vladimir Putin and Ramzan Kadyrov, Alexander Lukashenko, Gurbanguly Berdimuhamedov and Ilham Aliyev.

In the new «Freedom of the Press 2013» report, submitted on May 1 in Washington, DC by the «Freedom House» organisation, the situation with the freedom of media is valued in 197 countries and territories in 2012. According to the estimates in 2012, Kazakhstan dropped by 3 positions and continues to be in the category of «not free» countries, sharing the 182nd place with Laos, Saudi Arabia, Somalia, Vietnam, West Bank of the Jordan River and the Gaza Strip.

The court decisions in relation to the independent media have a clear political character and set a precedent for the de facto ban on journalistic activities in the Republic of Kazakhstan. Independent mass media of Kazakhstan – «Vzglyad», «Respublika», «stan.tv» and «K+» provided the most extensive coverage of the Zhanaozen oil workers’ strike in December 2011, criticised the police for exceeding their authority and the murder of civilians when dispersing the demonstrations and urged the Government authorities to ensure the objectivity of the investigation of Zhanaozen tragedy. These actions were deemed illegal by the Government which accused the independent media of extremism, involvement in the organisation of riots and inciting social discord during the Zhanaozen events.

The above facts indicate that Kazakhstan, which is a member of the Human Rights Council of the United Nations and was the Chairman of the Organisation for Security and Cooperation in Europe in 2010, grossly violates its international obligations.

The Council of Europe Declaration on freedom of political debate stipulates: «The pluralist democracy and freedom of political debate require that the public receives information on all matters of public life, which implies the right of the media to disseminate negative information and critical opinions about politicians and government officials, as well as the public’s right to become acquainted with them».

In order to facilitate the improvement of the situation with regard to freedom of expression and to support journalists of the independent media in Kazakhstan, we consider it necessary for political pressure to be exerted on the Government authorities of the Republic of Kazakhstan by the UN, the OSCE, the EU, as well as by the governments of democratic states. We therefore suggest that the following officials be addressed with official inquiries:

and with the following requests:

More on this topic:
Respublika , Vzglyad