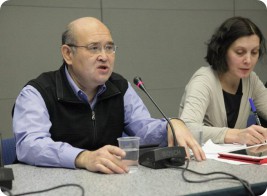 Former Deputy Minister of Finance of Kazakhstan was detained by the police on Wednesday at the request of the authorities of his country. – Muratbek Ketebayev is being persecuted for his political activities – says a human rights organisation.

Ketebayev has resided outside the territory of Kazakhstan for three years now, he has lived in Poland since 2011. He was a co-founder of the opposition party “Alga!” banned for criticising the government.

According to the Open Dialog Foundation’s website, in his native country he was charged with, among other things, ‘Incitement of social unrest’, ‘incitement to overthrow the constitutional order’, financing outlawed opposition newspapers and preparation of a terrorist attack. Meanwhile, the European Parliament estimates that the charges  faced by Kazakhstan opposition members are political in nature. MEP Marek Siwiec highly regarded Ketebayev’s activities for democracy and human rights in Kazakhstan.

We have become aware of the facts contained in Katabayev’s custody report. It results from the report that the police stopped the politician at 5 pm. He demanded a lawyer. He confirmed that in February he had applied for political asylum. Ketebayev had no reservations as to the mode, appropriateness and legality of his detention.

– The police officers attended his apartment at Chopin Street on Wednesday. They did not find him at home. His roommate informed him about of the visit and Mr. Ketebayev came voluntarily to the police station. Our records showed that he was on the wanted list. He was detained and remained at the disposal of the District Prosecutor’s Office – says Janusz Wojtowicz, a spokesman for the Regional Police Headquarters in Lublin. He emphasises that the police carried out routine practices and there is no information as to which matter is related with the detention. Ketebayev was taken to police detention cell.

– Kazakhstan is ruled authoritatively. The European Parliament in its three resolutions called on its authorities to respect the law, because the processes and sentences for dissidents fall far from civilised standards. Accusations against Ketebayev are virtually duplicated from other activists’ charges. They are quite absurd, especially since he was in Poland when the more serious riots took place. If he is be deported, he will go to prison – says Tomasz Czuwara from the Open Dialog Foundation.

More on this topic:
Muratbek Ketebayev