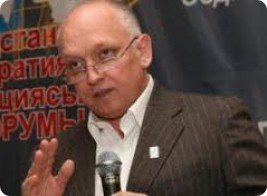 Communiqué concerning the case of V.Kozlov

On April 1 of the current year, at 10.00 am, a trial will be held at the Almaty City Court, concerning the so-called “tax case” of Vladimir Kozlov, leader of the opposition People’s Party “Alga!”, in the state registration process.

The tax authorities affirm that V.Kozlov has owed to the treasury about 50 thousand dollars over the last five years. The politician himself see the cause of what is happening to be in the fact that he had announced in November 2010 his intention to run for the next presidential election.

Vladimir Kozlov is charged that in 2002-2010 he has acquired property for about two dozen immovable in all regions of Kazakhstan, having a proof of income that would be enough for only half of these acquisitions. The politician himself explains the situation by the fact that all the immovable, except his own apartment, are the party offices for the branch offices of the Party “Alga!”, as well as the building with the Printing establishment “Cometa-S”. All these immovable were acquired by means of Vladimir Kozlov and his deputy in the party Muratbek Ketebaev. Mr. Ketebaev`s financial participation in buying property is notarial certified, however, this fact is not taken into account by the courts. Therefore, a part of the money used for buying the real estate by V. Kozlov, are considered by the tax authorities to be “gained in an unidentified way”.

If on April 1 the Cassation Board of the Almaty City Court makes decision in favor of the tax authorities (that is quite doubtful), V. Kozlov, beside his obligation to pay about 50 thousand dollars of taxes and penalties, might be called to criminal account by the financial police. The penalty for this item is up to 3 years imprisonment.

Press Service of the PP “Alga!”