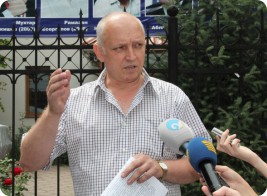 On 6 June, 2013, the wife of a sentenced opposition politician Vladimir Kozlov, Aliya Turusbekova, reported that a provocation had been organised in the colony against her husband, which may adversely affect any decision regarding his eligibility for parole in the future. Kazakh human rights activists are calling for an international campaign in defence of Vladimir Kozlov and other political prisoners in Kazakhstan.

As stated by Aliya Turusbekova, “A prisoner from Zhanaozen attacked Volodya, accusing him of being responsible for the deaths of Zhanaozen citizens on 16 December 2011. They got into a fight, as a result of which Volodya has been reprimanded”. The incident happened on the same day (30 May, 2013) that financial police searched the offices of NGOs “Arka Suyeu” and “Balga”. Workers of the offices are former members of the banned opposition party “Alga!” and members of the organisational committee of the “Freedom” award, which is awarded for achievements related to the promotion of democratic values in Kazakhstan. Kazakh prosecutors said that the event was associated with the outlawed party “Alga!” and was subsequently illegal. Aliya Turusbekova believes that the searches of NGOs’ offices and the provocation against the former leader of the Alga! party Vladimir Kozlov are directly connected.

The reprimand received by Kozlov influences the position of the politician in the colony: it may affect the number of visits of his relatives, as well as the number of packages he will be permitted to receive.

Earlier, on 21 May, 2013, it was reported that the head of the Public Oversight Commission of the North Kazakhstan region, Evgeniy Golendukhin, as part of a routine monitoring of the ЕС-164/4 facility, visited another prisoner of the regime — a human rights defender and lawyer Vadim Kuramshin. Kuramshin had no specific complaints about the administration of the colony, except for the fact that, due to the strict conditions of detention, he was not able to call his lawyer. Deputy of the European Parliament for the Socialist Party of Ireland, Paul Murphy expressed his support for Vadim Kuramshin, saying that “by sentencing him to a prison term, the regime got rid of yet another unwanted critic”.

A resolution on Human Rights in Kazakhstan, adopted by the European Parliament on 18 April, 2013, calls on the Kazakh government to release political prisoners Vladimir Kozlov and Vadim Kuramshin.

31 May, 2013, famous Kazakh human rights defenders and civil society activists Zauresh Battalova, Evgeniy Zhovtis, Lukpan Akhmediarov, Bahytzhan Toregojina, Amangeldi Shormanbaev, Galim Ageleuov, Erlan Kaliyev, Rozlana Taukina and Zhanara Balgabaeva have published the first list of Kazakh prisoners, who can be defined as political prisoners according to the criteria of Amnesty International and the Parliamentary Assembly of the Council of Europe. The list includes politician Vladimir Kozlov, social activist Aron Atabek, human rights defender Vadim Kuramshin, journalist and civic activist Aleksandr Kharlamov, Zhanaozen oil workers’ activist Rosa Tuletaeva, and one of the leaders of the striking oil workers also a victim of police torture, Maksat Dosmagambetov. Detailed information about each of them can be found in the annex: download the annex.

On 4 June, 2013,  Aktau City Court dismissed the claims of relatives of the deceased and injured oil workers from Zhanaozen against the Department of Internal Affairs, Mangistau region. Human rights activist Asel Nurgazieva  deemed the court unfair as it has prevented further consideration of the case against the police officers, who fired live ammunition at peacefully protesting oil workers during the events in Zhanaozen in December 2011.

Ten representatives of families of the victims of the Zhanaozen events are seeking compensation from the DIA of the Mangistau region for material and moral damages: as a result of police actions, relatives of the oil workers lost their breadwinners or suffered significant financial losses incurred as a result of necessary treatment and experienced severe anguish. Earlier, on 28 May, 2012, five police officers were convicted under Part 4 of Art. 308 of the Criminal Code “abuse of power or official authority” without further qualification in Art. 100 “Homicide committed by means deemed to be in excess of the measures necessary to apprehend a perpetrator”. This fact has prompted the members of the affected families to appeal to the court. On 16-17 December, 2011, policemen  opened fire on civilians, including minors.

Asel Nurgazieva intends to appeal against the decision on rejection of the claims and will address the UN Committee on Human Rights regarding the matter.

In  its 2012 report,  published on 23 May, 2013, Amnesty International stated that the government of Kazakhstan has not taken sufficient measures to bring to justice those responsible for the murder of civilians in Zhanaozen. Five police officers have been convicted in connection with the shooting, “however the number of deaths and serious injuries indicate that there were significantly more policemen who wounded and killed on that day”.

2 June, 2013 – 3 June, 2013 — the first official visit of President of the European Commission Jose Manuel Barroso to Kazakhstan. During meetings with the top leaders of the country, strategic cooperation between the EU and Kazakhstan was discussed. However, representatives of civil society in Kazakhstan have expressed regret that the President of the European Commission did not meet with human rights activists and NGOs to discuss human rights issues in the country.

On 3 June, 2013, at a joint press conference the President of Kazakhstan Nursultan Nazarbayev labelled the European Union as ‘the main foreign economic and political partner of Kazakhstan’: “it is sufficient to note that over recent years investments of the EU countries amounted to 80 billion U.S. dollars, and the level of bilateral trade accounted for 32 billion U.S. dollars”. At the same time, Jose Manuel Barroso said that the EU intends to “embark upon a new era in our relationship by  conducting negotiations for the adoption of a new agreement on extended partnership, aimed at more comprehensive cooperation. The European Union intends to continue to promote the expansion of partnerships across all fields of mutual interest”.

Also, the President of the European Commission emphasised that Kazakhstan is a strategic energy partner and a reliable supplier of oil to the EU. It was stated that the EU is ready to support Kazakhstan’s accession to the World Trade Organisation, which will lead to an increase in investment.

At the same time, human rights activist Evgeniy Zhovtis and the director of “The Fund for Development of Parliamentarianism in the Kazakhstan”, Zauresh Battalova, regretfully disclosed that they, like other members of civil society, did not receive an invitation to a meeting with President Jose Manuel Barroso. The President of the Public Fund “Ar. Rukh. Khak.” (“Honour. Spirituality. Verity”), Bahytzhan Toregozhina, stated that in a letter to the President of the European Commission, she had sought a meeting “in order to, jointly with our human rights activists, discuss with him the situation of human rights in Kazakhstan, as well as to raise the question of the fate of political prisoners”. The letter remains unanswered.

At a meeting with students of the Eurasian National University, Jose Manuel Barroso said that one of the conditions of the signing of a new agreement between the EU and Kazakhstan is respect for human rights: “human rights and respect for the rule of law are part of a modern society and must be secured through open dialogue, political pluralism and a vibrant civil society”. However, the official joint communiqué does not mention the issue of human rights protection and freedom of speech in Kazakhstan in the context of bilateral relations with the EU.