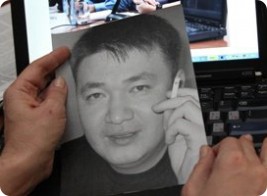 Anxiety of the editorial office of Kazakhstan newspaper “Voice of Republic” (“Голос республики”), that the director of the editing-company Daniyar Moldashev disappeared for some reason is being confirmed. DIA (ДВД) of Almaty, to use the mildest term, misinformed the general public, by declaring that relatives are in contact with him and, consequently, he did not disappear anywhere. Ascar Moldashev, the brother of Daniyar, is worried more than the journalists are. Today after dinner, in the presence of the editorial office legal adviser Sergey Utkin, he sent in an application to the Department of Internal Affairs of Almaty with the request to start searching.

Hereinafter we cite the text of the application:

He was seen three days ago, early in the morning on March 30, 2011, he said that he was going somewhere on business and left. Since then nobody has seen him. Some days earlier, on March 26, he suffered an assault related to robbery just near home. He was severely beaten; he suffered a brain concussion and his arm was in a plaster cast and since that incident, he was on bed rest. The robbers took the brother’s precious things and documents, which he was carrying from Moscow. Daniyar works as a director of LLP “ADP LTD”, which is the editor of the newspaper “Voice of Republic”. I thought that they had sent him on a business trip in such condition, but at his office, they told me, that they also could not find him and did not send him anywhere.

On March 30, after the editing office of the newspaper “Voice of Republic” had sent out information about the brother’s disappearance, police officers came to us. They started to carry out special investigation activities (ОРМ) and said that their aim was to prove, that Daniyar did not disappear anywhere, they needed to report to Astana about that. Soon Daniyar phoned to his relatives and said that he is all right, his phone number displayed. After that, the policemen told me to phone this number via hands free, they recorded the call on a voice recorder. Daniyar answered and said that he flew out to Kiev on March 30, and at that moment he was in Minsk on business, he said that he was all right, and told me to stay out of this.

However, I did not manage to question him closely about anything, as he put the phone down too quickly. After that call (about 8 o’clock pm on March 30), his phone was unreachable all the time. In addition, today, on April 2, just after midday Daniyar phoned me again, and told once more, that he was all right, he told me not to appeal with an application, that afterwards he would explain everything to me. His behavior seemed to be strange; he had not behaved like that before.

After I had learned that just before the assault on my brother, he was spied on in Moscow and photos of those people and cars registration numbers were published, I began to suspect something was wrong. Now I start realizing, that all these events are, perhaps, links of one chain. Spying – assault related to robbery, beating, robbery of precious things and documents – refuse of the brother from filing an application on a policeman’s advice – disappearance – phone calls to relatives and work on the evening of March 30, and now phone calls on April 2.

I have an impression that the policemen have not started an investigation. That policemen, actually, have some connection with Daniyar (have contact with him unlike his relatives and colleagues). That is why when they needed confirmation that he is alive and all right – Daniyar phoned immediately on March 30, and when they learned that I was going to file application about his disappearance, I immediately received phone calls on April 2, where Daniyar asked me not to file application. I think of those phone calls with Daniyar and understand that he is, most probably, under somebody’s control. He might have been kidnapped, perhaps, something is being made upon him at the moment, particularly, and they may apply some methods of psychotropic impact. I cannot imagine what to do.

All relatives are extremely disturbed with his disappearance. That is why I ask you to start his search on expedite basis, I ask you to investigate very quickly and carefully all circumstances which have happened to him during last days. It is necessary to designate, if he is actually outside Kazakhstan, where his phone calls came from. Perhaps, it is necessary to refer immediately for support to law enforcement agencies of Russia, the Ukraine and Byelorussia.

I urge you not to disturb our parents, considering their age and state of health, they are extremely worried anyway. I did not file an application before, since policemen told me that it was necessary to wait for 3 days. Now the time has passed.

Even in the process of filing application, we started to find out more new and extremely curious details of policemen behavior in the story with Daniyar.

“When we arrived to DIA with Ascar, we were directed to the deputy chief of the criminal police office”, – Sergey Utkin told to the editing office immediately after filing application to the police. – “He listened to us, called for some officer and instructed him to accept the application officially, register it in the BAR (КУЗ), but this will be done by Bosnatyrskoye ROIA (РУВД).” What is interesting, this application was refused to supervise individually – it was joint to that material, which they already possessed after the report of a police investigator in the context of the assault related to robbery. On March 26, Bosnatyrskoye ROIA accepted a message from the city clinical hospital No. 4 and the arrived police investigator took depositions from Daniyar, but they did not open a case, though they had to. Only on March 31, the public prosecution office issued a commission to examine the doctor, the wife, take a reference from the airport etc. that is, issued a commission to continue the investigation of the incident.

Stated differently, in the process of application filing it was found, that Daniyar gave testimony to the police and the fact of beating him and the robbery was fixed. However, the policemen decided not to open a case – though they had to do that even without application of Daniyar.

What happened to Daniyar is to be qualified as “assault with intent to rob” and falls under the article 179 of Criminal Code of the Russian Federation (“Robbery, i.e. assault with intent to plunder, connected with violence dangerous for life and health of the assailed. With endangerment of direct application of such violence, – is punishable by imprisonment for a term from 3 to 7 years with confiscation of property or without such” – editor.). Accusations under this article are considered as public charge cases. Criminal prosecution on such cases is performed regardless of   complainant’s appeal filing, i.e. the police had to open the case.

However, they failed to do that. Instead of this DIA of Almaty actually accused the editing office, that it invented the story about disappearance. In fact, the police desired to burke this case.

We remind that the editing office representative Guzyal Baidalinova talked to Daniyar Moldashev in the morning on Monday – he informed her about robbery and beating and told that he was at home with brain concussion. In the evening, he was to get on for contact, but he failed to do that. On Tuesday and before noon on Wednesday the editing office tried to find him, but unsuccessfully. Daniyar Moldashev has carried on cooperation with the editing office for more than 10 years. Namely, he helped the journalists to set up and to start the notorious in the country-printing establishment “Cometa S” (“Комета S”), which was victimized by prosecution of the financial police. Not even once during all these years Daniyar disappeared without prior notice – even when he needed to leave from the country for one or two days.

Editorial office of the newspaper “Voice of Republic”