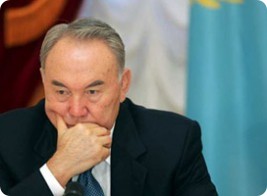 The EU has condemned Kazakhstan parliament’s move to skip the 2012 presidential vote and hold a referendum instead extending the leader’s rule, saying this would contradict Kazakhstan’s commitment to democracy.

2020 would be in contradiction with Kazakhstan’s commitment to democracy and good governance,” the bloc said in a statement.

Kazakhstan’s parliament on Friday voted unanimously in favor of holding a referendum to extend the rule of long-serving President Nursultan Nazarbayev until 2020, bypassing the scheduled election.

Nazarbayev, who has been in power for 20 years, vetoed the parliament’s original call for the referendum. The European Union praised the president’s move, but he was easily overruled by lawmakers.

The EU urged Kazakhstan, which held the OSCE’s rotating presidency in 2010, to “continue to strive for regular, free and fair elections in line with its constitution and OSCE commitments” and noted the “special responsibility of the Kazakh parliament in this regard.”

The EU statement stressed that all the OSCE participating states “have agreed that the will of the people, freely and fairly expressed through periodic and genuine elections, is the basis of the authority and legitimacy of all government.”

“We note that the current constitution of Kazakhstan provides for regular and free elections and we hope that pressure to change these important provisions will be resisted,” it said.

The United States also earlier released a statement condemning the referendum move saying that it would be “a setback for democracy.”