Kazakhstan: Alma Shalabayeva’s case may be deemed to be politically motivated

The criminal proceedings against the wife of fugitive Kazakh opposition leader, Mukhtar Ablyazov, bear features of a political order. Ablyazov’s six-year-old daughter, Alua Ablyazova, may also be the victim of political conflict. The international community must intervene in order to ensure fair consideration of the criminal case against Alma Shalabayeva in court.

Dubiousness of the charges against Alma Shalabayeva

On the night of 1 June, 2013, immediately upon arrival at the airport of Astana following the unlawful deportation from Italy to Kazakhstan, a representative of the National Security Committee (NSC) presented Alma Shalabayeva with:

Alma Shalabayeva refused to sign the above mentioned documents.

Head of the Investigation Unit of the NSC Department of Atyrau Province, A. Abugaliyev instituted a criminal case against Alma Shalabayeva just one day after her arrest in Italy, which can hardly be considered a coincidence. Alma Shalabayeva faced accusations under the following articles of the Criminal Code of the Republic of Kazakhstan (the CC of the RK):

• Article 325 section 2 of the Criminal Code, “Forgery of a certificate or other official document granting the rights or releasing from duties, or sale of such a document, as well as the manufacture or sale of counterfeit stamps, seals, forms, state awards of the Republic of Kazakhstan or the Soviet Union, committed repeatedly or by group of persons by prior agreement”.
• Article 325 section 3 of the Criminal Code: “A deliberate use of falsified documents”.

The wife of the opposition politician, Mukhtar Ablyazov, is facing a prison sentence of up to 4 years. According to investigators, in 2012, Alma Shalabayeva allegedly colluded with the employees of the Registration Service Committee of the Ministry of the Interior and the Department of Justice of Atyrau Province in order to produce fake passports and identity cards of the Republic of Kazakhstan for herself as well as three of her children. Two days after Alma Shalabayeva’s deportation, on 4 June, 2013, the employees were sentenced by the Atyrau City Court No. 2 to various prison terms. In particular, the former employees of the migration police, Zhomart Kushal and Dametken Kuzembayeva were sentenced to 9 years in prison including confiscation of property, and 7 years and 2 months imprisonment with confiscation of property, respectively, on charges of accepting bribes. 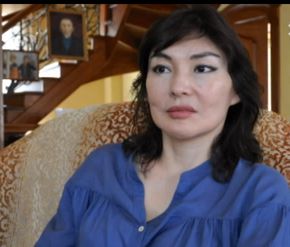 Immediately after the conviction, Dametken Kuzembayeva’s counsels announced their intention to appeal against the verdict. They argue that their client’s guilt hasn’t been proven in court, as the accusations were based on assumptions and haven’t been confirmed by a presentation of evidence. Thus, the state prosecution has submitted no conclusions of examinations, no material evidence, no evidence of the existence of telephone calls or SMS messages, indicating Kuzembayeva’s fault. All charges had been produced only on the testimony of an entrepreneur Dana Yeseyeva, who received a conditional sentence of two years’ imprisonment. Kuzembayeva’s lawyers claim that in the course of the investigation, their client received offers suggesting that her confession to uncommitted malfeasance in office and libel towards her former colleagues would be sufficient to force her granting of amnesty. Otherwise, she was threatened by the prosecutors that a ‘serious’ article would be applied in her case. Eventually, they carried out their threats – Dametken Kuzembayeva was sentenced to 7 years and 2 months in prison. In her final statement to the court, she brought charges against the preliminary investigation body, which, in her opinion, had conducted the investigation in violation of the rules governing criminal procedure.

6 days later, on 7 June, 2013, after the wife of Mukhtar Ablyazov was taken to Kazakhstan, First Deputy General Prosecutor of the RK, Johann Merkel stated that Alma Shalabayeva had already been “sentenced to a non-custodial punishment for the use of a forged passport”. On the same day, a few hours later, Johann Merkel rebutted his earlier statement on the website of the General Prosecutor’s Office, stating: “I wish to inform everyone about the misunderstanding which occurred due to an incorrect interpretation of my words. A. Shalabayeva’s involvement in …illegal production and issuing of illegal passports is, indeed, being verified… Currently, A. Shalabayeva is under house arrest in the city of Almaty, and no charges have been brought against her. Accordingly, she has not been sentenced”. Later that day, on 7 June, 2013, Alma Shalabayeva was served with the order to institute criminal proceedings. According to the decision, from August 2012 to the present Alma Shalabayeva has allegedly been using the passport number 08162365, issued on 3 August, 2012. However, the decision does not contain any examples of the use of the passport No. 08162365.

On 20 June, 2013, the Ministry of Justice of the Central African Republic (CAR) has officially confirmed that Alma Shalabayeva bears a legal diplomatic passport of the CAR No. 06FB04081 in the name of Alma Ayan. The passport was issued on 1 April, 2010 and is valid until 31 March, 2015. The Minister of Justice has presented a copy of the Central African Republic passport. Alma Shalabayeva applied for a legal passport of the CAR in the name of Alma Ayan for safety reasons. 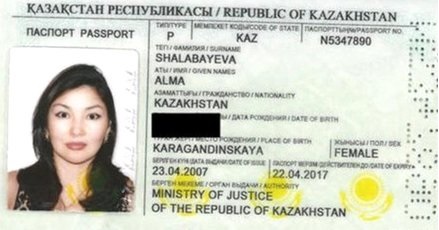 It follows that the possession of the legal passport of the CAR by Alma Shalabayeva since 2010 does not erradicate the validity of her Kazakh passport No. 5347890 dated 23 April, 2007. Under Kazakh law, the citizenship of Kazakhstan is surrendered should a person acquire the citizenship of another state. However, the loss of Kazakh nationality occurs precisely at the moment of the registration of a new passport. To do this, a person must notify the consulate of the reasons for the renouncement of citizenship. On this basis, the consulate or Interior Ministry register the renunciation of citizenship of the Republic of Kazakhstan. Alma Shalabayeva hasn’t addressed the Consulate, and the government of Kazakhstan, in turn, has not processed the yielding of her citizenship. In this case, Alma Shalabayeva can legally use her Kazakh passport, regardless of the fact of her possession of the Central African citizenship. If the person hasn’t submitted an application for registration of loss of nationality, he or she is subjected only to the administrative liability which is penalised by a fine of 86550 tenge (437 euros).

The Open Dialog Foundation received documents pertaining to the charges brought against Alma Shalabayeva from her relatives for the sake of familiarity. Below we present their brief analysis:

There is no information on how exactly Alma Shalabayeva and her children used the fake passports. Thus, the charge under Article 325 section 3 of the Criminal Code (“deliberate use of false passports”) is yet to be proven.

On 23th June 2013, Mukhtar Ablyazov informed of the political decision of the Kazakhstan authorities to sentence his spouse to 2 years in prison, and his 6-year-old daughter to be warded to a children’s home in view of a supposed lack of her elderly grandparents ability to take care of her: “An order has now been made for a prompt court case to be conducted and for Alma to be convicted. It is to be done as quickly as possible throughout late July and early August, when the European Parliament takes its summer break. As they say, “quick, neat and clean”. After the mother is sentenced, it has been decided that the child will be taken away from her grandparents and sent to a children’s home. They will justify this decision by citing Alma’s parent’s inability to look after their granddaughter due to the mother’s elderly age and the father’s Alzheimer’s disease. It is precisely to this end that rumours were spread that Alma had returned to Almaty of her own free will in order to take care of her elderly parents.

Due to the concerns about the fate of Mukhtar Ablyazov’s spouse and their 6-year-old daughter, both of whom are currently in Kazakhstan, the Open Dialog Foundation addresses the following competent authorities of Kazakhstan:

with an official request that the most pressing questions be answered:

Let us remind you that the Alma Shalabayeva, the spouse of the fallen-from-grace Kazakh opposition activist Mukhtar Ablyazov, and her six-year-old daughter were detained during a Special Forces operation in Italy on 29th May 2013 and deported to Kazakhstan on 31st May 2013. The deportation was conducted under gross violations of international norms. The Ministry of foreign affairs of Kazakhstan stated that the wife and daughter of Mukhtar Ablyazov were deported to Kazakhstan on an initiative originating on the Italian side. At the same time the Prime Minister, minister of justice and minister of foreign affairs of Italy stated that the situation of Alma Shalabayeva and her daughter was only made known to them after they had been deported. It has reported that the Italian minister of foreign affairs, Emma Bonino, labelled the incident “an outrageous irregularity”.

The Open Dialog Foundation calls upon everyone interested in a just and fair investigation of all the circumstances of the criminal case against Alma Shalabayeva to send similar queries to the competent authorities of the Republic of Kazakhstan. The given case is a dangerous precedent for undemocratic regimes to utilise family members, including minors and infants, as hostages in their fight against political opposition.