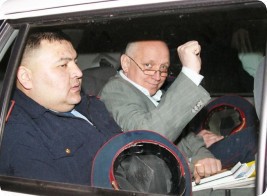 representatives of the EU diplomatic missions in Kazakhstan;

Chairman of the Committee of Criminal and Correctional System of Kazakhstan’s Ministry of Internal Affairs, Baurzhan Berdalin;

Commissioner for Human Rights in the Republic of Kazakhstan, Askar Shakirov.

Political prisoner, Kazakh opposition leader Vladimir Kozlov has been systematically and unlawfully denied a transfer to a colony in close proximity to his place of residence in Almaty Province. Long trips to North Kazakhstan Province could jeopardise the life and health of Vladimir Kozlov’s pregnant wife.

On 16 December, 2012, by virtue of the decision of the Ministry of Internal Affairs (MIA), Vladimir Kozlov was transferred to a colony located far from his place of residence, i.e.in the city of Petropavlovsk, in the administrative centre of North Kazakhstan Province. On 14 December, 2012, Kazakhstan’s Interior Ministry explained that Vladimir Kozlov was transported to the penal colony EU 164 /3 in North Kazakhstan Province due to the fact that there is no general regime colony in Mangistau Province, where he was convicted. However, Article 68 of the Criminal Executive Code (CEC) directly stipulates that the convict should serve his sentence in a colony which is situated  proximately to his latest place of residence prior to his conviction (in Vladimir Kozlov’s case: Almaty Province).

On 21 May, 2013, the Ministry of Internal Affairs explained to Vladimir Kozlov’s wife that at that time, there were no barriers to transferring Vladimir Kozlov to one of the prisons of the city of Almaty or Almaty Province. However, the request for such transfer cannot be granted, since, according to Article 76 of the CEC of the RK, a person sentenced to imprisonment must serve his entire sentence in one correctional institution.  But, as stated by human rights activist, Yevgeniy Zhovtis, at the outset, MIA should have adhered to the first legal requirement, i.e. to transfer Vladimir Kozlov to a colony which is proximate to his last place of residence. It is only when this requirement has been fulfilled that the second requirement of serving the entire sentence in the same prison becomes binding.

On 11 September, 2013, the Committee of Criminal and Correctional System (CCCS) of the Ministry of Internal Affairs published an official response to the inquiry of the internet portal Total.kz: “Solving of the problem regarding the transfer of V.I. Kozlov to the general regime colony of the Criminal and Correctional System Department for the city of Almaty and Almaty Province is currently impossible due to difficulties connected with the placement of inmates in the institution“. On 12 September, 2013, the Head of the EU Delegation in Kazakhstan, Aurelia Bouchez expressed her surprise and concern at the response of the MIA.  According to Yevgeniy Zhovtis, this response indicates that there are no available places for inmates in the Almaty colony. The human rights activist points out that within the year, which has passed from the announcement of the verdict against Vladimir Kozlov, investigators had sufficient time to legally arrange his placement in a colony in close proximity to his place of residence: “The colony is not a static institution, people are released from it… If there is awaiting list, please announce  Mr. Kozlov’s current placing on the list”.At the same time, according to the sources of the private media outlet ‘Respublika’, there are available places in the colony of Almaty province.

On 7 October, 2013, it became known that the CCES had dismissed Aliya Turusbekova’s petition to transfer her husband to the colony near his place of residence, which she indicated, was due to the fact that “there are no circumstances which would prevent Vladimir Kozlov’s further confinement in the colony No. EC 164/3”. The management of the CCES believes that the only sufficient grounds for the transfer of the convict to another prison would be the reorganisation of the prison, threats to the security of the inmate or circumstances surrounding his condition of health. According to existing information, in the North Kazakhstan Province colony, Vladimir Kozlov is still not receiving adequate medical care, which in turn, means he is at risk of suffering a stroke.

The Open Dialog Foundation underlines that the justification given by the Ministry of Internal Affairs for denying the petition to transfer Vladimir Kozlov to a colony in close proximity to his place of residence, contradicts the direct stipulations of Kazakh legislation. The commentary to the Criminal Executive Code indicates that the serving of a sentence of imprisonment in a prison close to the prisoner’s last place of residence is aimed at social rehabilitation and maintenance of contact with the family. Also, the official website of the CCES of Kazakhstan’s Interior Ministry informs that the reasons behind the transferral of prisoners to another prison are usually “exceptional family circumstances”. On 8 September, 2013, by virtue of the decree of President Nursultan Nazarbayev a new national holiday was established in Kazakhstan – Family Day. In his words, “the cultivation of family values, large families constitute one of the highest priorities of our state”.

The Open Dialog Foundation hereby calls on the authorities of Kazakhstan to comply with their own declarations and conduct the legal transfer of Vladimir Kozlov to a colony in close proximity to his place of residence. Aliya Turusbekova is anticipating the birth of their child in the near future, which effectively deprives her of the opportunity to meet with Vladimir Kozlov in North-Kazakhstan Province. Vladimir Kozlov’s confinement in a colony near to his last place of residence, would allow international human rights organisations and representatives of the EU to carefully monitor the conditions of his detention and the observance of the rights of the convict.