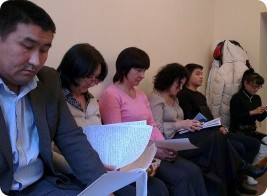 The Open Dialog Foundation calls on the European observers to attend the upcoming trial in the case of Kazakh human rights defenders, Zinaida Mukhortova and Vadim Kuramshin

On 13 November, 2013, Karaganda Regional Court is to consider the appeal filed by the Kazakh human rights activist, Zinaida Mukhortova, against the decision of the Balkhash City Court dated 20 August, 2013, regarding her forced hospitalisation.

On 25 November, 2013, the Supreme Court of the Republic of Kazakhstan is to hold a preliminary review of the supervisory appeal filed by Vadim Kuramshin’s lawyers against the judgement dated 7 December, 2012, according to which the human rights activist was sentenced to 12 years in a strict regime prison with confiscation of property.

Zinaida Mukhortova’s appeal has previously been postponed twice. On 22 October, 2013, the Karaganda Regional Court postponed the hearing of the appeal until 4 November, 2013. However, on that day, the hearing was postponed again – until 13 November, 2013. By decision of the Prosecutor’s Office of Balkhash, dated 30 September, 2013, the human rights activist was sent to  the Medical Centre of the neuropsychiatric clinic of Balkhash for Mental Health Problems, Astana. On 1 November, 2013, Zinaida Mukhortova was released from the institution. The results of the psychiatric evaluation have not yet been announced, but the human rights activist states that there is every reason to believe that the doctors will recognise her as compos mentis. The imposed psychiatric treatment of Zinaida Mukhortova is a consequence of her professional legal and human rights activity – this opinion is shared by representatives of the European Parliament and the European bar associations.

We hereby call on the EU diplomatic missions, the United States and the OSCE in Kazakhstan to send their representatives as observers to the coming trial in the case of the Kazakh human rights activists, Zinaida Mukhortova and Vadim Kuramshin, as the charges against them may be  politically motivated. According to the undertaken international obligations, the Kazakh authorities should guarantee the right to a fair trial and create conditions for all human rights defenders in the country to carry out their legitimate activities without fear of political repression and restrictions.