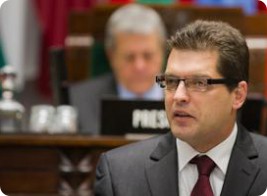 WARSAW, 14 January 2011 – The director of the OSCE Office for Democratic Institutions and Human Rights (ODIHR), Ambassador Janez Lenarcic, today expressed concern about reports indicating that Kazakhstan’s parliament decided to open the way for holding a referendum on the extension of the term of office of President Nursultan Nazarbayev.

“The purpose of the planned referendum is inconsistent with Kazakhstan’s international obligations and we hope the competent authorities will take the appropriate steps to stop this initiative,” Lenarcic said.

“Referenda can be a way to involve citizens directly in the decision-making on important issues. But a referendum can never be a substitute for periodic elections. It does not offer a genuine choice between political alternatives and would infringe on the opportunity of citizens to hold their representatives accountable and to effectively exercise their right to vote and be elected.”

He added that the will of the people in such matters can only be determined by an electoral process that provides an equal opportunity for all citizens to become candidates.

Lenarcic stressed that the envisioned extension of the incumbent’s term of office would amount to abolishing elections for Kazakhstan’s top government position for a considerable period of time, in effect leaving the country without a presidential election for a total of 15 years.

This would run counter to some of the most fundamental OSCE commitments and other international standards.

As a participating State of the OSCE, Kazakhstan is obliged to hold free elections at reasonable intervals and respect the right of citizens to seek political or public office without discrimination.

Kazakhstan has also agreed that the basis of the authority and legitimacy of all government is the will of the people, freely and fairly expressed through periodic and genuine elections.

These commitments were just reaffirmed by the President of Kazakhstan and the heads of state or government of the other OSCE participating States at the OSCE’s Summit in Astana last month.

“It is particularly distressing that this referendum initiative appeared only weeks after Kazakhstan as the then-chairmanship hosted an OSCE Summit that in strong terms reaffirmed all OSCE commitments, including those on democratic elections,” Lenarcic said.

The referendum would also be in violation of the Universal Declaration of Human Rights, as well as the legally-binding International Covenant on Civil and Political Rights and CIS Convention on Standards of Democratic Elections.

In addition, the constitution states that international treaties ratified by Kazakhstan have priority over national legislation.