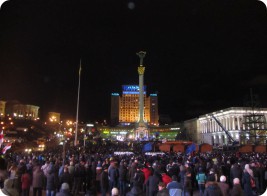 Authorities are stealing an historic opportunity from the Ukrainian people

On 21 November, 2013, the Cabinet of Ministers of Ukraine passed a resolution suspending the process of preparation for the conclusion of the Association Agreement between Ukraine and the European Union, the European Atomic Energy Community, and their Member States. The purpose of this decision was, according to the resolution, the need to “ensure the national security of Ukraine” and “restore trade and economic relations with the Russian Federation and other CIS member states”. At the same time, at a forum in Vienna, the Ukrainian President Viktor Yanukovych stated that “Ukraine followed, and will continue to follow the path of European integration”. Such inconsistency by Ukraine suggests the presence of secret backroom agreements between the presidents of Ukraine and Russia, and other members of the Customs Union – Kazakhstan and Belarus. For example, no information was released regarding the issues discussed by the Presidents of Russia and Ukraine during the informal meeting in Sochi on 27 October, 2013. It is possible that the subject of this meeting was to discuss Ukraine’s accession to the Customs Union.

For Ukraine, failure to sign the Association Agreement with the European Union equates to a rejection of European values in the field of protection of rights and freedoms of Ukrainian people. In addition, it would worsen the deterioration of the economic situation of the country, and would be seen as another negative sign for foreign investors. In the first instance, a refusal to sign the Association Agreement would have negative consequences for Ukrainian society. According to the latest polls, 58% of the population of Ukraine support the signing of the Agreement with the EU, indicating that they wish to opt for a ‘European future’. In addition, the change in the country’s foreign policy might become a factor prompting destabilisation prior to the presidential election in 2015.

The European Union makes specific requirements regarding Ukrainian legislation, suppression of violations of human rights, and changes regarding government influence on the judicial system. These requirements are aimed at eradicating egregious cases of selective justice and aiding the plight of political prisoners in Ukraine.

Why do the Ukrainian authorities allow themselves to make such decisions? The answer to this question highlights a long list of reports of human rights violations, falsification of election results, suppression of freedom of speech, and the cooperation of intelligence services with countries of the Customs Union and the Shanghai Cooperation Organization (SCO). The scale of these activities is so broad that representatives of civil society are being kidnapped on the streets, and contrived criminal cases are being instituted.

Integration with Russia and Kazakhstan will not help to improve the human rights situation in Ukraine. Along with many international human rights organisations, the Open Dialog Foundation emphasises widespread human rights violations in the countries of the Customs Union. Closer ties with Russia and Kazakhstan may deepen the cooperation between the countries of the Customs Union in the persecution of political opponents.

The Open Dialog Foundation has already described cases of cooperation between secret services in Ukraine, Russia and Kazakhstan which resulted in illegal kidnapping and persecution of unwelcome figures for political reasons.

In addition to its own list of political prisoners and refugees – Yulia Tymoshenko, Yuriy Lutsenko, Bohdan Danylyshyn, Valeriy Ivashchenko and others, the Ukrainian authorities are “obligingly assist” other governments in the persecution of their political opponents. The most resounding and unequivocal of the recent cases is the request for extradition of the Kazakh, Mukhtar Ablyazov, which was filed in France. A similar request was made in the Czech Republic in the case of Tatiana Paraskevich. Earlier, Ukraine “exposed” itself by kidnapping a Russian activist, Leonid Razvozzhayev.

For Ukraine, failure to sign the Association Agreement with the EU would signal the loss of the most promising opportunity for economic and social development in the last decade, and may become the deciding factor prompting destabilisation in the state prior to the upcoming parliamentary and presidential elections.

An equally important factor endangering the strategic opportunities of Ukraine as a state, are the non-public political agreements of the business elite and the inner circle of President Viktor Yanukovych, who put their corporate interests above the interests of Ukrainian society.

Representatives of the opposition, civil society and international organisations have repeatedly called on the authorities to reach a compromise and make decisions based on their responsibility for the development of the country and the future of its people. However, individual corporate interests of the ruling elite might be dominant, not only in deciding the fate of people, but also in defining the future of Ukraine as an independent and equal member of the world community. The only thing which can stop the lawlessness of the Ukrainian ruling elite is the strong expression of will of Ukrainian civil society, which we witness in the majority of Ukrainian cities and even outside of Ukraine during these times.