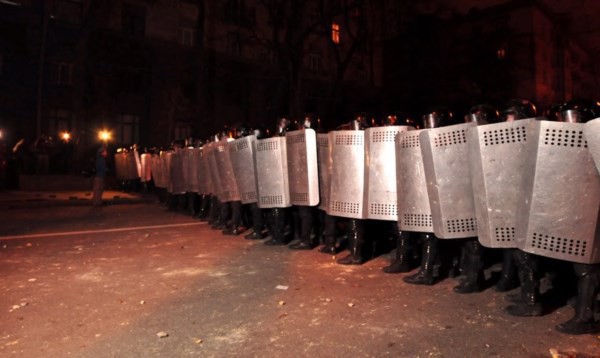 Ukraine: the list of journalists and activists aggravated as a result of actions of the ‘Berkut’ Special Forces during protests in Kiev

Dozens of journalists and protesters were ruthlessly beaten by special forces ‘Berkut’. Several medical volunteers were also subjected to battery. Below, the Open Dialog Foundation  presents a list of victims.

1. Danish journalist Vamberg ANDERSEN – on the night of 30 November, 2013, following the dispersal of the euro-Maidan, the police prevented him from filming and struck him about the head.

3. Polish journalist Paweł PIENIĄŻEK – was covering the events near the Presidential Administration of Ukraine. He suffered a head injury during one of the attacks on the police protesters, although he presented his press card.

5. Joseph SIVENKY (the newspaper ‘The New York Times’) – suffered injuries during the assault near the Presidential Administration of Ukraine. “I was wounded in the face by shrapnel after the explosion, which occurred in front of me, when I was reporting the clashes near the Presidential Administration on Bankova Street. I cannot say exactly what it was, but I suspect that it was a fragment of a sound grenade or gas canister. In the hospital, the shrapnel was removed and I received stitches”- the photojournalist said.

6. Sergey YURCHENKO (the news website ‘Novoross.info’, the newspaper ‘Tavricheskiye vesti.Novorossia’) was seriously injured during the riots on Bankova Street in Kiev: he sustained head injuries along with several fractures and and other injuries, and was hospitalised in the Kiev Hospital No. 17; his tablet was stolen or lost.

3.Dmitriy VOLKOV (the TV channel ‘1+1’) – a ‘Berkut’ worker smashed his cell phone and suffered a blow to his clavicle.

4.Igor VOLOSYAKIN (the news website ‘uezd.com.ua’) – he was struck in the head by a stone.

5.Valeriy GARAGUTS (the newspaper ‘Litsa’) – Valery announced through his lawyer that while he was lying on the ground with other victims, ‘Berkut’ workers were taking turns posing in front of them and taking photographs, having placed one foot on the heads of their mutilated victims, they portrayed themselves as hunters and referred to the detainees as ‘meat’. (More information: here and here).

8.Yevgeniy GOLOVATYUK (the news agency ‘Ukrainski novyny’) lost consciousness after a sound grenade exploded near him.

10. Mikhail ZAGORSKIY (the ‘Zhytomir.info’ website) sustained a blow to his face administered with a truncheon.

11.  Alexandr ZAKLETSKIY – was subjected to a battery by the police.

12.  Dmitriy LARIN (the news website ‘Ukrainska pravda’) a ‘Berkut’ worker tore off his press pass and began to beat him.

14.  Dmitriy KACHURA (the newspaper ‘Kommentarii’) – a ‘Berkut’ worker threw a stone  which struck him on the spine.

15.  Lesya KOVAL (the TV channel ‘Ukraina’) ‘Berkut’ workers pushed Lesya Koval, along with her mother, to the ground and struck them about the kidney area.  When she protested that she was a journalist, they scolded her with swearwords.

16.  Stanislav KOZLYUK (the newspaper ‘Ukrainskiy tyzhden’) was beaten by a representative of the ‘Berkut’ special unit near the building of the Cabinet of Ministries of Ukraine on 24 November, 2013.

17.  Valeriy KOLOSYUK (the news website ‘Аratta. Okno v Ukrainu’) – ‘Berkut’ workers pushed him to the ground and Begin to strike him with truncheons (6-8 officers). He sustained a large hematoma to his temple and injuries to his arms and legs. ‘Berkut’ workers smashed his camera.

19.  Roman KUPRIYANOV (the news agency ‘Euronews’) Roman was capturing footage of a man who was lying on pavement after he had been beaten. Officers of the Special Forces ‘Berkut’ ordered him not to film; still, Roman continued to film. Special Forces officers beat him. He is now in hospital having been diagnosed with a brain injury.

21.  Yevgeniy MALOLETKA (the news agency ‘UNIAN’) sustained a broken arm; also, his camera lens and flash was smashed. According to him, assailants battered him intentionally, fully aware of the fact that he was a journalist.

23.  Ivan NAKONECHNIY (the TV channel ‘Channel 5’) – ‘Berkut’ workers dragged him along the ground and tried to throw him over a fence.

25.  Alexandr PEREVOZNIK (the news agency ‘LIGABiznesInform’) – was beaten by police officers despite the fact that he was identifying himself as a journalist.

26.  A freelance journalist, Sergey POLEZHAKA– ‘Berkut’ workers struck him on his arms and damaged the lens of his video camera in the process.

31.  Yevgeniy FELDMAN (the newspaper ‘Novaya Gazeta’) –was struck by a stone.

32.  Natalia FIGEL (the media portal ‘Vidia’) – during a peaceful protest action in support of European integration, she was attacked by an unidentified man who tried to smash her video camera.

33.  Oleg KHAVRUK (the newspaper ‘Kommentarii’) – ‘Berkut’ workers caused trauma to his head and injuries to his arms and spine.

34.  Ivan CHERNICHKIN (the newspaper ‘Kapital’)– sustained injury to his leg as a result of the explosion of a sound grenade.

36.  Anton CHERNYSHOV (independent journalist labour union) – the police beat him, took his video camera and smashed  it to pieces.

37.  Sergey CHUZAKOV (the news agency ‘Associated Press’) – was hospitalised with trauma to his head following the clashes of rally participants with the police in Kiev; he was struck by a stone in the face.

Following the attack of ‘Berkut’ and dispersal of the protesters from the Independence Square on the night of 29 November, 2013, a number of activists were beaten and detained. Several people are still missing. The civil initiative ‘Euromaydan SOS’ produced a list of the individuals.

8.Boris DONSKIY – hospitalised with the diagnosis of ‘fracture of the left tibia’

14.  Vladimir IVANOV (released) – hospitalised with the diagnosis ‘injury of the elbow joint’

18.  Ivan KRYACHKO (released) – hospitalised with the diagnosis ‘chest injury, injury of the soft tissues of the right thigh’

Several activists were severely beaten by the ‘Berkut’ special unit near the Presidential Administration of Ukraine on 1 December, 2013. Nine protesters were detained. Six of them were injured or maimed with varying degrees of severity and were subsequently hospitalised. Criminal cases were initiated against the detainees on charges of organising mass riots and participating in them (Article 294 of the Criminal Code of Ukraine). If they are found guilty, they may be sentenced to prison terms of 5 to 8 years. On 4 December, 2013, the Shevchenko District Court in Kiev sanctioned the 2-month arrest of 9 activists:

Also, an activist of the ‘Svoboda’ party, Alexandr SOLONENKO, who had been detained near the monument of Lenin in the centre of Kiev, was sentenced to 2 months’ incarceration. Alexandr was accused of committing a crime punishable under Article 296 (‘Hooliganism’). He is facing 7 years’ imprisonment. Andrey DZYNDZYA, a journalist of the civil society organisation ‘Dorozhnyi Kontrol’, who also has been presented charges of organising and participating in riots near the Presidential Administration on 1 December, 2013, was arrested for two months on 6 December, 2013.

In relations to the majority of defendants, there is no hard evidence of their guilt. Moreover, video footage exists which captures the moment when a ‘Berkut’ worker was beating Ostashenko and Lazarevskiy, whilst they showed no resistance. (More information: here). From 24 November to 3 December, the police instituted a total of 64 criminal cases with relation to the mass protests in Kiev. Fourteen citizens were arrested on the request of the pre-trial investigation bodies.

According to the Ukrainian mass media, since 30 November, 2013, a total of 305 injured people sought medical assistance, of which, 120 received treatment in hospital. Presently, 9 people are being treated in hospital.

Ukrainian mass media have also reported on the beating of a volunteer medical team by ‘Berkut’ workers; the team assisted victims on 1 December, 2013, near the building of the Presidential Administration of Ukraine. The details were reported by Valeriy Kondratov: “I was at the medical aid station, bandaging people; another volunteer was taking an injured girl to the ambulance. At that moment, the ‘mopping-up’ began, people were running, the medical team of 4 people remained in order to continue providing medical care. When they pushed further into the crowd, the team of doctors, with their arms raised, shouting that they were providing medical assistance, endeavoured to approach the bleeding journalist”. It was at that point that ‘Berkut’ workers began to beat the doctors. “In the end, when I was lying on the ground, with my face down, and one of them (‘Berkut’ workers – Ed.) lifted me up so that his partner could hit me in the face,”  – Kondratov reported.

The Open Dialog Foundation hereby strongly condemns the use of force in relation to  doctors and medical staff, activists and journalists during the protests in Kiev. This is the first case in the history of independent Ukraine where dozens of journalists (including foreign) have been injured simultaneously due to the actions of law enforcement bodies. The use of physical force against journalists during the performance of their professional duties is a criminal offence (Article 171 of the Criminal Code), and so, those guilty of beating journalists must bear full responsibility in accordance with law.

According to Article 12 of the Law of Ukraine ‘On Militia’ (‘Conditions and limits on the use of physical force, special measures and firearms’) “…the use of physical force by the police must not exceed the measures necessary to carry out police duties, and the possibility of causing harm to the health of offenders and other citizens must be minimised”. Nevertheless, video footage of the events of 30 November (at Independence Square) and 1 December (near the Presidential Administration of Ukraine) clearly show that the officers of the Special Forces ‘Berkut’ deliberately and ruthlessly beat activists, doctors and journalists. Such actions of the police should be classified as abuse of power and punished by law.

The Open Dialog Foundation hereby urges governments of democratic countries and international human rights organisations to conduct a thorough international investigation into the events in Kiev. Senior officials of the Ukrainian government, law enforcement authorities, as well as ordinary members of the ‘Berkut’ Special Forces, involved in the beating of activists, doctors and journalists during the events of 30 November and 1 December must bear full responsibility for their actions.

More on this topic:
Ukraine , EuroMaidan