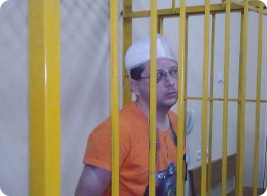 Appeal of people injured during peaceful protests in Ukraine

Mr. Barack Hussein Obama,President of the United States of America

On the 21st of November, 2013 thousands of peaceful protests started in Kyiv and other cities around Ukraine and even abroad. The Ukrainian people showed their indignation at the historic decision not to enter into the Association Agreement with the European Union and called for reform in spheres concerning the rule of law, human rights and the fight against corruption.

We have witnessed the theft of our hope for a better future. Yet, even that was not enough for the authorities. On November 30, at 4 a.m. the peaceful protest on Maidan Nezalezhnosti (the Independence Square) in Kiev was brutally dispersed. Berkut riot police officers showed particular ferocity in beating up young people, including women and peaceful protesters of different ages.

Still there is no precise data on how many people suffered as a result of the bloody outrage.

Many of them were taken to hospital with fractures and other severe injuries; there are also persons still missing. Two representatives of the Republic of Poland, who were expressing their solidarity with the protesters on Maidan, were among the victims. Two journalists were also amongst those injured on that “terrible” night.

The official reason for forceful dispersal of the Euromaidan protests was “preparation for New Year holidays and installation of the Christmas tree”.

Following these events, a wave of criticism and discontent has spread. The use of force and subsequent bloodshed was condemned by public activists and opposition, Ukrainian diplomats, intellectuals, as well as retired generals and athletes.

On the 1st of December, 2013 the Ukrainian people expressed their outrage by means of peaceful protests all across Ukraine. In the capital, according to various estimates, from 500 thousand to 1 million people were gathered. The provocation, which took place in the vicinity of the building of the President’s administration, needs to be investigated separately. However, videos being published on the internet show excessive violence and ill-treatment of protesters after following their arrest by Berkut riot police officers. We should seek the truth regarding the situation that arose as a result of this provocation. However, the fact remains that during the conflict, Ukrainian and foreign journalists as well as activists were injured. Internal Troops’ officers were also injured, as for some reason they were assigned the task of defending the President’s Administration building, in the very first row of security, in front of Berkut riot police forces and without the use of protective shields. According to the “EvromaidanSOS”, by the evening of December 3 appeals from 39 relatives of persons detained by law enforcement authorities had been recorded along with 65 injuries and 32 missing persons reports. Foreign and domestic journalists were also injured and/or subjected to violence. 34 criminal investigations on cases of battery have been initiated. Unfortunately, the list of victims is growing and there have been attempts to prosecute innocent people, who have expressed their civil position.

Due to the increased risk of destabilization in Ukraine and the threat of the launching of “repressive machinery”, we, the victims of violence against peaceful protests, as well as representatives of civil society, would like to ask you to support our request for international assistance in the form of an independent observers’ mission including experts and politicians, in order to monitor the developments in Ukraine.

We desire a peaceful resolution to the current problems in the country and we strongly believe that the presence of international observers, experts and diplomats would provide much needed assistance in ensuring that the issues at stake and the rights of citizens of Ukraine are addressed and respected without further violence taking place.

Appeal was signed by:

Yana Stepanova, the relative of Mykola Lazarevskyi, who was injured by police on Bankova Str. on 1.12.2013.

Liubov Prytulenko, the mother of Yaroslav Prytulenko, who was injured by police on Bankova Str. on 1.12.2013.

Bilogradova Kateryna, the wife of Yaroslav Prytulenko, who was injured by police on Bankova Str. on 1.12.2013.

Hrystyna Previr, the sister of Jehor Previr, who was injured by police on Bankova Str. on 1.12.2013.

Pavlo Blyzniuk, the relative of Serhii Nuzhnenko, was injured by police on Bankova Str. on 1.12.2013.

Oleh Ostashhenko, the brother of Olexandr Ostashchenko, who was injured by police on Bankova Str. on 1.12.2013.

Andrii Denysenko, a (legal) representative of journalist Valerii Garagutsa, who was injured by police on Bankova Str. on 1.12.2013.

Natalia Doroshenko, a (legal) representative of Vladislav Zahorovko, who was injured by police on Bankova Str. on 1.12.2013.

Olexandra Matviichuk, chairman of the Center for Civil Liberties.

(Original signatures are under the Ukrainian version of the appeal, which is also attached)