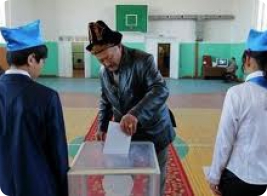 The main violation at the election districts was the compulsion of students to vote, as well as the total shadowing on every vote.

Young Voters’ League (YVL) finished the observance on 47 districts – in large educational institutions and hostels of Astana, Almaty and Shymkent – at 01:30 a.m. on the 4th of April.

The turnout by 20:00 on the 3rd of April, according to districts of YVL’s observation, had made 68 318 people, what makes 59 % of the total number of voters of these districts.

Two days before the election, some strangers phoned the coordinator of the project; they introduced themselves as members of akimat and demanded the lists of observers, threatening not to allow them to come to the districts.

Besides, at the day of the election, a provider cut off the office telephone, which is the telephone of hotline. The organization has no payment arrears.