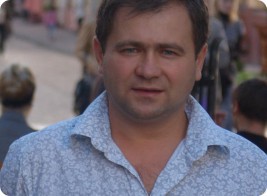 The court ruled to apply the measure of restraint in the form of arrest for 2 months against Andrey Dzyndza, who was detained in connection with the events which took place near the Presidential Administration of Ukraine on 1 December, 2013. The journalist’s supporters claim that he has become a victim of oppression, targeted at active participants of the Euro-Maidan protests. Similar charges were presented to the arrested activist, Vladimir Kaduri. Andrey Dzyndza’s counsel, Viktor Smaliy, was also detained.

Andrew Dzyndzya (37 years old, born in Kiev, Ukraine) is a journalist and civic activist of the NGO ‘Dorozhnyi Kontrol’ (‘The Road Control’), which monitors the activities of the Road Automobile Inspection of Ukraine (RAIU). Andrey Dzyndzya is known to the public as a result of his reports, in which he uncovered offences of corruption committed by RAIU officers.

On 5 December, 2013, Andrey Dzyndzya, along with two activists of Auto-Maidan, Sergey Khadzhynov and Alexandr Kulikovskiy were detained by workers of the Directorate for Combating Organised Crime (DCOC). As stated by Sergey Khadzhynov, during the detention and on the way to the DCOC facility, they were beaten: “…We were attacked by unknown persons wearing civilian clothes and balaclavas, who began to beat us. They struck our arms and legs; they pushed us to our knees, handcuffed us, put bags over our heads and hustled us into a van. In response to our questions “Who are you?” and “Where are we going?”, they would simply strike a blow to our spines each time we asked.” According to Khadzhynov, in the DCOC building, a police officer approached them carrying vinegar and cleaned the shoeprints from their clothes.

As it later transpired, civil society activists were arrested in connection with the events of 1 December, 2013, near the building of the Presidential Administration of Ukraine. In particular, Andrey Dzyndzya was accused of “stealing a tractor, used for the crushing of police fences near the Presidential Administration building”. Sergey Khadzhynov and Alexander Kulikovskiy are connected to the case as witnesses.

On 6 December, 2013, the Shevchenko District Court in Kiev held a hearing in the case of Andrey Dzyndza. The journalist’s counsel, Viktor Smaliy was notified of the court hearing only an hour prior to its commencement, and therefore, had no opportunity to fully prepare the defence of the journalist. It is also worth noting that after the detention, Andrey Dzyndzya was not given the opportunity to contact his lawyer immediately, which is a violation of Article 29 of the Constitution of Ukraine.

At the hearing, Andrey Dzyndzya was presented with charges of committing a crime punishable under Article 286 of the Criminal Code of Ukraine (“Illegal acquisition of a motor vehicle, with the use of violence, dangerous to the life and health of the victims”). It is noteworthy that the prosecution failed to provide evidence that would clearly indicate Andrey Dzyndza’s guilt. The photos and videos which captured the protest show that the journalist was filming the events, while someone else was driving the tractor. Ukrainian MPs called for the journalist to be bailed in order so he would be released, but Judge Vladimir Bugin rejected this option and ruled that Andrey Dzyndzya should be incarcerated for 2 months (60 days). Thereafter, a clash between the journalist’s counsels and law enforcement officials broke out in the courtroom; it was stopped by the Special Forces unit ‘Grifon’. During the announcement of the court’s decision, a few thousand activists picketed the Shevchenko District Court; due to this fact, a unit of ‘Berkut’ Special Forces arrived at the facility.

Vladimir Kadura was also incarcerated for 2 months and faces charges of “theft of a tractor and breaching police barriers near the Presidential Administration building”. Like Dzyndzya, he faced charges pertaining to Article 286 of the Criminal Code. According to Yulia Gress, Vladimir’s wife, the hearing was a mere formality, as the arguments of the defence were not taken into account. Kadura’s counsel, Evgeniy Grushovets, stated that a search was conducted in his client’s house with numerous violations, which may indicate evidence tampering.

On 9 December, 2013, information about the arrest of Victor Smaliy, Andrey Dzyndzya’s counsel, was made public. He is accused of the attempted murder of Judge Vladimir Bugina (Article 379 of the Criminal Code of Ukraine) during the clash, which took place in the courtroom following the announcement of the decision to incarcerate Dzyndzya. It was reported that during the detention, Smaliy had been beaten and  tortured in the detention facility. The editor of the newspaper ‘Dorozhnyi Kontrol’, Aleksey Kiriyenko believes that all these events are part of a plot contrived by law enforcement bodies. “He did not attack the judge. We think that this is a contrived detention, aimed at leaving Dzyndzya without defence and jailing Viktor. We are currently witnessing the commencement of oppression of those who help people who participate in the Maidan events,”– Kiriyenko stated.

Currently, Andrey Dzyndzya and Vladimir Kadura are being remanded in Lukyanovskiy Detention Centre in Kiev.

The Open Dialog Foundation hereby expresses its concern over the arrest of the journalist of ‘Dorozhnyi Kontrol’, Andrey Dzyndzya and the activist Vladimir Kadura. The hasty nature of the judicial review of their cases casts doubt over the objectivity and impartiality of the court. The criminal prosecution of Viktor Smaliy, the defender of the journalist, also raises anxiety. We hereby urge the international community to monitor the case of Andrey Dzyndzya and other arrested activists, as well as to exert pressure on the Ukrainian authorities in order to avoid political oppression and unfair trials in relation to the participants of Euro-Maidan.