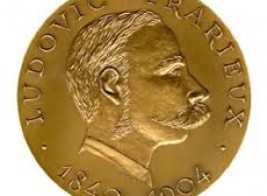 Dear Chairman of the Jury of the Ludovic-Trarieux International Human Rights Prize,

Mr. President of the Bar Association,

Mr. Secretary-General of the Institute of Vocational Scope of Human Rights at the Bar Association in Paris, Dear Colleague,

Mr. President of the European Bar

This sentence was uttered by René CASSIN when formulating the provisions of the Universal Declaration of Human Rights; he also added:

Nursultan Nazarbayev was elected president of the country.

However, hopes associated with this event were soon shattered:

The reform, awaited for so long, proved to be an exact replica  of the previous political system and economic anagement typical of the regime, from which the country wished to escape.

Kazakhstan was transformed from a Soviet republic to a presidential dictatorship…
History tends to repeat itself.

The problem of succession of the president, Nursultan NAZARBAYEV who was bestowed the title of lifetime president, appears on the horizon.

This results in an unmitigated ‘Raid’.

Those who dared to defend human rights and to speak out about unspoken things, are criminals sought and imprisoned by the incumbent regime.

6.
For two years, the oppression directed at civil society, opposition movements and media outlets has been increasing.

The information about the oppression has been reported by Amnesty International and Human Rights Watch.

7.
The Bar Association in Paris, like members of the World Coalition Against the Death Penalty, opposes the possibility of extending the imposition of the death penalty within the reform of the Criminal Code,  carried out by Kazakhstan.

How many crimes will become punishable by the death penalty in the coming months?

Oppression is already sreading beyond the borders of Kazakhstan:
Kazakh authorities do not hesitate to use international arrest warrants, issued by Interpol, to pursue political dissidents in Europe.
Their goal is to:

Muzzle them, silence them…

The Board of Inquiry of the court in Aix-en-Provence is considering the request for the extradition of the dissident Mukhatar Ablyazov, who was arrested in France on 31 July, 2013, and is being remanded in a French detention facility.

His wife and daughter have already been extradited to Kazakhstan by  Italian bodies – this action was carried out in violation of international law, within a period of 72 hours, with the use of an aircraft chartered by the Kazakh authorities.

In its ruling in the last instance, the Spanish Court ‘Audiencia Nacional’ upheld the decision to extradite Alexandr PAVLOV, the main collaborator of Mukhatar Ablyazov.

His fate is now in the hands of the Spanish government.

Traditionally, France and the Paris Bar Association consistently strive to be an ambassador for human rights observance, protection of the freedom of expression and the freedom of movement.

The Paris Bar Association is involved [in human rights protection] and intervenes in all violations of human dignity.

It condemns discrimination and violence, both physical and mental.

As you know, I addressed the president of Kazakhstan with a request that your son, your brother, be released.

I informed Laurent Fabius, the Minister of Foreign Affairs, about our concern over the difficulties faced by our colleagues, as well as the extension of the death penalty.

14.
We also raised the issue of threats to the legal profession, especially regarding its independence in Kazakhstan.

Proud of the man whose struggle is part of the quest for freedom and protection of human rights.

Our colleague is our brother.

Our colleague, whose appeal was rejected by the Supreme Court in Kazakhstan, as we learned last week…

His struggle is our struggle.

There is no worse crime than silence…

President of the Paris Bar Association

More on this topic:
Ablyazov , Kuramshin