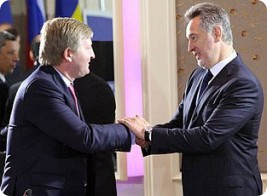 West urged to introduce sanctions against Firtash, Akhmetov and Klyuyev

Yanukovych’s partners should spend their holidays in Minsk and Almaty, and not in Milan and Sardinia: Ukrainian journalists wrote in an article for Bloomberg.

Ukrainian journalists published a polemical article in the influential news agency, Bloomberg, in which they listed the main financial partners of President Viktor Yanukovych and urged Kiev’s Western partners to introduce sanctions against them. The article was authored by the editor-in-chief of the ‘Korrespondent’ magazine for the years 2003-2013, Vitaliy Sych, the editor-in-chief of the UNIAN, Mikhail Gannitskiy, the deputy editor-in-chief of the ‘Ukrainskaya Pravda’ [‘The Ukrainian Truth’] Sergey Leshchenko and the co-founder of ‘Hromadske Telebachennia’ [‘The Civil Society Television’] Mustafa Nayem.

“Prior to the signing of an agreement with Russia by President of Ukraine, Viktor Yanukovych with the aim of helping our economy, European officials and analysts had admired the manner in which some businessmen, who had financed the President’s path to power, distanced themselves from him. But Ukrainians were not deceived by their conduct. The so-called oligarchs continue to support Yanukovych and soon they will become the main beneficiaries of a $15 billion loan and pay lower prices for natural gas. We still do not know what obligations Yanukovich undertook before Putin in exchange for the generosity of the latter, “- the article stated.

“Two major supporters of Yanukovych are the country’s richest businessmen: Rinat Akhmetov, a steel magnate and the owner of the FC ‘Shakhtyor’, as well as the energy trader, Dmitriy Firtash. International banks and other institutions must communicate clearly to Akhmetov and Firtash that they will cease cooperation with them if the magnates continue to support the regime of Yanukovych. Corporate social responsibility should not exist only for the sake of glossy brochures, distributed at investment conferences in five star hotels. It should also be applied in the real world. European governments can help as well. Targeted personal sanctions, including visa sanctions, must be applied with regard to members of the government, headed by Yanukovich, especially to persons involved in military actions, because of whom the wave of protests eventually broke out in Kiev. The first on the list may be Andriy Klyuyev, a close ally of Yanukovych and the head of the National Security and Defence Council,”- the journalists noted.

“Ukrainian public officials should reap the consequences of their policies by spending their vacation in Minsk and Almaty, and not in Milan and Sardinia, as they have become accustomed to. They must personally observe the consequences of a full-scale reintegration with Russia, Kazakhstan and Belarus within the Eurasian Union. We do not expect the rest of the world to rush to the aid of protesting Ukrainians right now. Instead, governments, businesses and non-governmental organisations, doing business in Ukraine, must show that they support European values​​, for which hundreds of thousands of Ukrainians are struggling with cold and police brutality every day” – the journalists underlined, noting that the named allies of Yanukovych control most of the ‘Party of Regions’ faction and are capable of influencing the dialogue between the government and the opposition and civil society, bringing about the expected results.

We should keep in mind that previously, Akhmetov urged all parties to join the political conflict to come to the negotiating table and find a solution that the country would be proud of.

Supporters of Ukraine’s European integration have twice picketed near Akhmetov’s apartments, located in the London residential complex 1 Hyde Park, and brought the ‘bloody Christmas tree’ to the Kiev office of the SKM company, owned by Akhmetov.