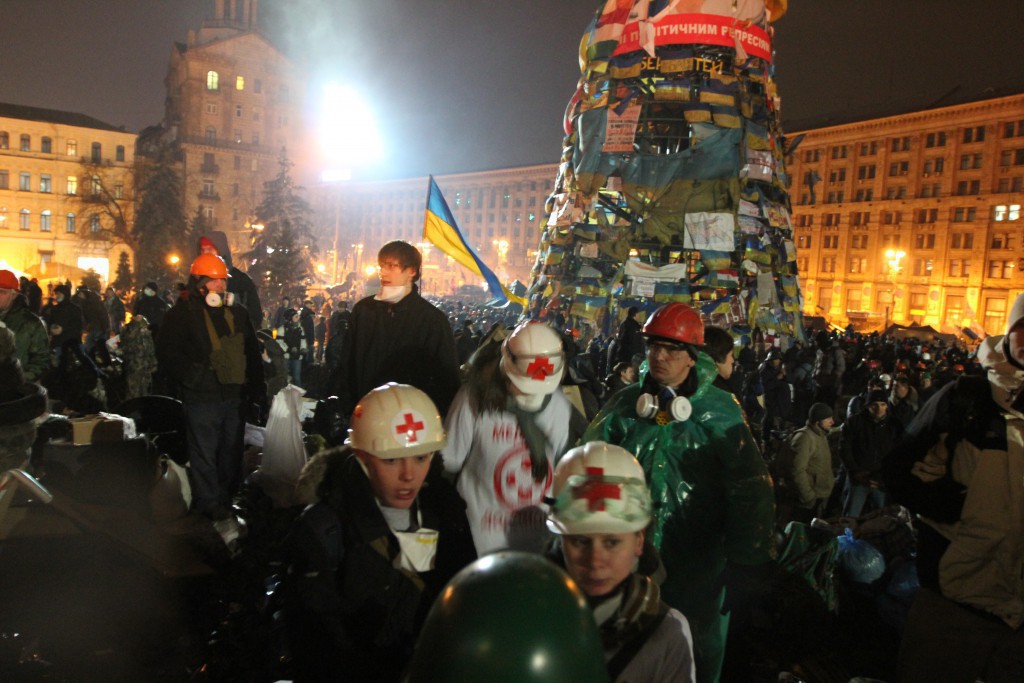 Since the time when the government decided to suspend the signing of an Association Agreement with the EU and to gamble on trade and economic relations with Russia, for three-and-a- half weeks Kiev and other regions have seen the most widespread anti-government protests in the 20-year history of Ukraine’s independence.

It’s the fourth consecutive Sunday that Kiev’s central square is filled with 200 thousand to half a million people, protesting against government policies and corruption in the state, against the brutal attacks on protesters and journalists, demanding the resignation of the government and the President, and to appoint a re-election of Parliament as well as to resume the path to European integration. The European Parliament expressed its solidarity with the protests of the Ukrainian civil society and noted that “in any democracy, a new election may be appointed whenever it is necessary to restore the people’s legitimacy”. In their public statements, representatives of the government and the pro-presidential party openly displayed an improper attitude towards hundreds of thousands of protesters. The Prime Minister and the pro-presidential party labelled protesters as ‘provocateurs’, ‘Nazis’, ‘extremists’ , ‘criminals’, ‘coup instigators’.

After the commencement of the protests, internal troops of the Ministry of Internal Affairs, as well as special police units began to gather en masse in Kiev. Under the cover of darkness, authorities twice tried to forcefully disperse the peaceful demonstration. As a result of police action, dozens of protesters and journalists suffered moderate injuries during the protests. Several protesters are still missing. The prolonged non-public investigation, launched by the General Prosecutor’s Office has not yet been completed. Four officials are suspected of involvement in the violent dispersal of the Euromaidan, but no action has been taken against leaders of the Ministry of Internal Affairs (MIA) and the National Security and Defence Council (NSDC), who, by virtue of their positions, should have been informed of the planned operation to forcibly disperse the crowd or should have authorised it. For example, one of those officially accused of the dispersal of the Euromaidan is deputy secretary of the NSDC, Volodymyr Syvkovych, but the General Prosecutor’s Office filed no claims against his immediate supervisors – the NSDC Secretary, Andriy Klyuyev, and the Head of the NSDC, Viktor Yanukovych. Also, officers of ‘Berkut’ Special Forces and the Ministry of the Interior who used brute force against peaceful protesters and journalists, were not brought to account.

In response to the growing social discontent, the authorities take action that could be construed as nothing other than political oppression. Across the country, activists of the Euromaidan are being assaulted. Peaceful protesters and journalists, beaten by police, are accused of organising and participating in the riots. Criminal proceedings against participants of anti-government protests are instituted not only in Kiev but also in other regions of the country. Pre-trial investigations and judicial proceedings are conducted with gross procedural violations.

In connection with the participation in mass protests, criminal cases were opened against 30 activists. Of them, as of 20 December, 2013, three people are being held in a detention facility; one man received a suspended sentence; five people had fines imposed on them and were later released (four of them will have a criminal record). Under pressure from the Ukrainian and international community, on 19 December, 2013, the Ukrainian parliament approved a draft law of the opposition, which provides for the exemption from criminal liability of participants of anti-government protests starting from 21 November, 2013. However, some experts and politicians fear that the law will be used in favour of the police officers who beat peaceful protesters and journalists. On 23 December, 2013, the President signed off the law. Deputy Head of the High Specialised Court of Ukraine, Pavel Gvozdik, stated that from a legal point of view, this law “cannot be applied in practice by law enforcement authorities or courts due to the lack of legislative mechanisms for its implementation”. In particular, the judge noted that the law does not clearly define persons to whom it applies, and that it contravenes the Criminal Code.

In addition, the Security Service of Ukraine has opened a criminal case “on charges of committing illegal actions aimed at seizing state power by individual politicians”. Searches were conducted in the offices of the opposition party and in the offices of some mass media outlets. MPs from the pro-presidential party stated that a number of respected independent analytical structures and civil society organisations are waging “information warfare” against Ukraine. MPs from the pro-presidential party demand that dozens of foreign politicians, analysts and businessmen be declared persona non grata; some of them are no longer permitted to enter Ukraine.

The phenomenon of the Maidan exists in its social, not political nature. Unlike the Orange Revolution of 2004, the Maidan-2013 is not formed around one or several political leaders. Among the organisers and participants of the Maidan, there are many public organisations, both left-wing and right-wing, united in the aim of democratising the system of government in the country. The Maidan is a place where numerous decision-making centres are located, extensive volunteer activities are being conducted, and a network of civic activists and NGOs is being formed and enhanced. Within three weeks, the Maidan attracted approximately 3 million hryvnias (about 275 thousand euros) in donations.

The Maidan demonstrates a high standard of self-organisation and solidarity of a certain element of society – the middle class, students, representatives of different professions and different age groups from the Eastern and Western regions of Ukraine. This has a positive effect on the development of the civil society as a whole. The order and security on the Maidan are provided by the protesters themselves, many of whom are former police officers and members of Special Forces units, including soldiers from various public organisations who fought in Afghanistan. They are striving to prevent any provocations.

Also, the Maidan has no single political aim and, still less so, ideology. According to the results of sociological research, the main motives that prompted people to come to the Maidan, were: the severe beating of peaceful protesters on 30 November, 2013 (69.6%); Viktor Yanukovych’s refusal to sign an Association Agreement (53.5%), the desire to change life in the country (49.9%), the desire to change the government in the country (39.1%). It is worth noting that the call of the opposition to come to the Maidan was answered by only 5% of the protesters. Thus, people with different political leanings and individual interests seek to determine the direction of development of society and demand that the state shows transparency and respect for their constitutional rights. It also reflects the crisis surrounding opposition in Ukraine, which is incapable of consolidating around itself a large sector of civil society, critical of the current government. Therefore, EU institutions need to develop new forms of cooperation, focusing not only on dialogue with representatives of political parties, but also on direct contact with representatives of the civil sector.

Ukraine is experiencing an acute political crisis. If the government does not heed the voice of civil society and continues to operate from a position of strength, the country may witness an escalation in the conflict and an authoritarian ‘rollback’ mirrorring Belarusian developments. Suppression of society’s voice and violation of fundamental rights may lead to a loss of confidence on the part of the EU and the international isolation of Ukraine.

Antimaidan -rallies in support of the Government of Ukraine.

Automaidan –an organised peaceful protest of motorists – supporters of Euromaidan.

Berkut -special police units at the regional departments of the Ministry of Internal Affairs of Ukraine. The main tasks of ‘Berkut’ units involve the protection of public order during public events and emergencies. The very units employed in the violent dispersal of mass protests on 30 November and 1 December, 2013 in Kiev.

Euromaidan -mass protest actions in Ukraine, which  were prompted by the decision made on 21 November, 2013 by the Cabinet of Ministers to suspend preparation for signing of an Association Agreement between Ukraine and the European Union. Following the violent dispersal of Euromaidan on 30 November, 2013, the protests have become characterised by anti-government sentiment.

Maidan – mass public rallies and protests in Ukraine. The term acquired its modern definition back in 2004, when tens of thousands of Ukrainians took to the central square of Kiev – Independence Square (in Ukrainian: Maidan Nezalezhnosti), protesting against the massive vote rigging of the presidential election in Ukraine.

Party of Regions – pro-government political party with a majority in the Ukrainian parliament.

Report on Euromaidan
More on this topic:
Ukraine , EuroMaidan