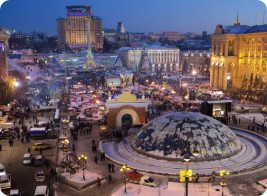 New Year’s Eve with Neil Taylor on the Euromaidan

Recently, the stage of Kiev’s Euromaidan welcomed two musical groups from Poland – Metka and The Stylacja. And now… on New Year’s Eve – Kiev will be filled with the guitar sounds of Neil Taylor himself!

Neil Taylor is one of the UK’s best known guitar players and a member of the legendary group, Tears for Fears. He also lends his talent to such celebrities as Robbie Williams, Tina Turner, Natalie Imbruglia and James Morrison. Currently, he is on tour to promote his third solo album ‘No God Like Rock ‘n’ Roll’.

“When Neil heard about the possibility of playing on Kiev’s Maidan on a night like this, it did not take him long to decide. Within an hour he had already two guitars and a bag of guitar effects packed, and was ready to fly to Kiev” – said Andrzej Kaźmirowski, who, together with the Open Dialog Foundation and other co-organisers, was responsible for this gift to the Maidan protesters.

“The power and enthusiasm, with which the Ukrainians receive signs of solidarity from our country, was an inspiration for us to do something special for them at the end of this difficult year. Hence the presence of Neil Taylor on the Euromaidan stage” – explains Bartosz Kramek from the Open Dialog Foundation.

Neil Taylor arrived in Kiev this afternoon. His presence at the show was shrouded in mystery until the very last moment. Due to security reasons and the possibility of not being allowed to enter Ukraine, only few people knew about his imminent arrival. So far, there have already been several incidents of musicians being turned back at the Kiev airport. In addition to Neil Taylor, the all-nighter will feature all major rock bands from Ukraine, including such groups as TNMK and SKAY who have played on the Euromaidan from the very first days of protests.

It is the fifth mission of the Open Dialog Foundation to Ukraine. The previous missions included meetings with politicians, opposition activists and NGOs, to which we also invited Polish MPs. The next step was inviting the first two Polish bands from Poland – Metka and The Stylacja – to the Maidan stage. Also, a further long-term mission, is in the process of preparation and will be carried out permanently on Maidan. Our delegates will remain there under the Polish and European flags flying over our tent.