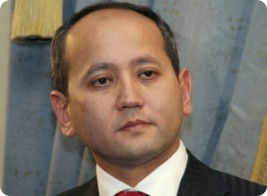 Don’t Extradite Refugee to Country Where he Risks Unfair Trial

On January 9, 2014, a court in Aix-en-Provence, France approved extradition requests filed by both Russia and Ukraine for the former BTA bank chairman and opposition figure Mukhtar Ablyazov. The court said Russia should take priority, after the French prosecutor argued that Ablyazov’s alleged crimes there, including embezzlement, are greater in scale.

An Ablyazov family lawyer told Human Rights Watch that the judges did not provide any reasoning for their decision, but said that written decisions would be provided later. Ablyazov and his defense team said they plan to appeal the decision to the Court of Cassation in Paris.

Arguments concerning Ablyazov’s extradition to both Russia and Ukraine were heard on December 12, 2013. Ablyazov’s defense team described the hearing as “disorganized and rushed” and said their client had “inadequate translation facilities.”

Human Rights Watch has repeatedly called on the French authorities not to extradite Ablyazov to either Ukraine or Russia. Under international and European human rights law, France has an obligation to protect Ablyazov, a recognized refugee in the UK, from extradition to any country that might return him to Kazakhstan, where he is at grave risk of ill-treatment and flagrant denial of his fair trial rights.

Ablyazov’s lawyers said that at the December 12 hearing, both Russia and Ukraine provided assurances that Ablyazov would neither be ill-treated nor sent on to Kazakhstan. Ablyazov’s defense team contended, though, that France would be in violation of its international and European human rights obligations if their client is sent to either Russia or Ukraine due to the real risk of torture or ill-treatment in either country and the likelihood that he would be sent on to Kazakhstan.

“Kazakh authorities have made no secret of the fact they want Mukhtar Ablyazov in their custody,” said Mihra Rittmann, Europe and Central Asia researcher at Human Rights Watch. “Diplomatic assurances from Russia and Ukraine—both of which have a sorry record of sending people to places where they face a risk of ill-treatment or torture—are hardly a guarantee that Ablyazov won’t end up in Kazakhstan’s clutches.”

On August 6, 2013, Kazakhstan’s prosecutor general’s office stated that it “will take all measures available under the law to have Ablyazov extradited” to Kazakhstan. The statement also said Ukraine and Russia, with which Kazakhstan has extradition agreements, were seeking his extradition from France on related criminal charges.

“The French authorities should protect Ablyazov from being forced back to Kazakhstan or to any other country where he faces a real risk of forced return to Kazakhstan,” said Jean-Marie Fardeau, France director at Human Rights Watch. “Kazakhstan is known for imprisoning critics after unfair trials and for ill-treatment of people in detention.”

Ablyazov is a prominent opposition figure and former chairman of BTA bank in Kazakhstan. He is wanted by the Kazakh government on embezzlement and other criminal charges relating to the alleged theft of funds from BTA bank while he was chairman in the mid-2000s. He is also wanted by the authorities in connection with the December 2011 violence in Zhanaozen, following labor unrest.

In 2001, Ablyazov and Galymzhan Zhakianov cofounded the opposition movement Democratic Choice of Kazakhstan (DVK). In a wave of government harassment of political opponents beginning in the early 2000s, authorities imprisoned both men in trials that international observers called grossly flawed. Ablyazov was later released. Then in 2009, Kazakh authorities again brought criminal charges against Ablyazov, claiming he misappropriated over US$5 billion from the bank, which the government had nationalized at the beginning of the year.

Ablyazov fled Kazakhstan in 2009. In 2011, the United Kingdom granted him asylum on grounds that he was at risk of persecution in Kazakhstan. In mid-February 2012, a British court found him in contempt for failing to disclose assets after BTA bank sued him for over US$5 billion. Soon after, Ablyazov went into hiding.

Kazakh authorities have pursued Ablyazov since he fled Kazakhstan, Human Rights Watch said. In recent months authorities have increased their efforts, targeting his family and his associates. They were actively involved in the illegal expulsion and transfer to Kazakhstan of Ablyazov’s wife, Alma Shalabaeva, and their 6-year-old daughter, from Italy on May 31. The Italian government has since admitted there were serious irregularities in the deportation procedure and has withdrawn the expulsion order.

On July 31, French authorities arrested Ablyazov at a villa in southern France. An Ablyazov family lawyer told Human Rights Watch that French authorities detained him on a request from Ukraine based on allegations of forgery and fraud. On August 1, a French court remanded him to custody for up to 40 days to consider the extradition request, although he has sought conditional release.

An Interpol alert for Ablyazov’s arrest has been active since 2009, after Kazakhstan brought charges against him. French authorities are considering Ukraine’s request for Ablyazov’s extradition, according to media reports and the Kazakh prosecutor general’s office statement.

Kazakh authorities have also sought the extradition of Aleksandr Pavlov, who previously worked as Ablyazov’s head of security, from Spain, where he has sought asylum, and of Muratbek Ketebaev, another opposition figure, who like Ablyazov has also been implicated in charges relating to the violence in Zhanaozen, from Poland.

Kazakh authorities seem hopeful that France will consider extraditing Ablyazov to Kazakhstan, even without a bilateral agreement. In its statement, the prosecutor’s office said, “As concerns… Ablyazov’s [possible] extradition to Kazakhstan, it should be noted that recently there is a positive tendency of transferring persons facing criminal charges from European countries [to Kazakhstan] on the basis of reciprocity.” The statement contends that this reflects the “international community’s growing confidence in Kazakhstan’s law enforcement and judicial agencies, which comply with international human rights standards.”

A July 2013 report by Amnesty International found that torture remains “commonplace” in Kazakhstan.

Human Rights Watch has also raised concern over the serious allegations of ill-treatment and torture in the aftermath of the Zhanaozen violence in December 2011. Human Rights Watch spoke to people who witnessed or were subjected to physical abuse by police in custody. They described how police kicked people, beat them with truncheons, stripped detainees naked and walked on them, and subjected them to freezing temperatures. Defendants in trials related to the December 2011 violence testified they had been beaten, suffocated, and psychologically ill-treated, yet the Kazakh authorities have utterly failed to carry out effective investigations and hold those responsible to account.

Human Rights Watch also has documented the failure by Ukraine and Russia to live up to their international obligations not to return people to countries where they face a risk of ill-treatment or torture.

In Ukraine, for example, Leonid Razvozzhaev, a Russian political activist who was charged with organizing mass riots during a May 2012 demonstration, was reported missing in October 2012. He had last been seen outside the premises of a United Nations High Commissioner for Refugees’ (UNHCR) nongovernmental organization partner as he was in the process of seeking asylum. He reappeared in custody in Russia two days after he disappeared from Ukraine. Later, he said that Russian investigators had psychologically tortured him so that he would confess, including by threatening to harm him and his children. He is currently in detention in Moscow, awaiting trial.

In July 2013, UNHCR issued a report on Ukraine as a country of asylum saying that Ukraine’s agreement with other former Soviet countries to cooperate in extradition of suspected criminals “can conflict with obligations under the 1951 [Refugee] Convention.” UNHCR noted that “in 2012, Ukraine extradited a refugee who had been recognized both under the UNHCR mandate and by another state-party to the 1951 Convention.”

Human Rights Watch has also documented multiple instances in recent years in which Russian authorities breached international human rights law by approving the extradition of asylum seekers to countries where they face the risk of torture and ill-treatment, such as Uzbekistan and Kyrgyzstan.

The most recent example concerns three ethnic Uzbek men wanted by Kyrgyzstan on charges related to the June 2010 violence in the southern part of the country. Despite the clear and serious threat of ill-treatment and torture they would face if returned, as documented by the UN special rapporteur on torture and other international and domestic rights groups, the Russian prosecutor general approved their extradition, and Russian courts upheld the decision.

“Ukraine and Russia have a long and sorry record of returning people to countries, especially within the former Soviet Union, where they face a risk of torture, ill-treatment, and unfair trial,” Fardeau said. “There is every reason to fear that if France sends Ablyazov to either of those countries, their governments would return him to Kazakhstan.”

European Union member states are bound to respect the same standards and procedures for asylum and other forms of protection, Human Rights Watch said. France should not extradite anyone who has been recognized as a refugee by another EU member state, including the UK, to a country where the person’s safety cannot be assured.

“In considering any requests for Ablyazov’s extradition, it is crucial for France to fully comply with its obligations under EU, human rights, and refugee law and protect him from serious violations of his fundamental rights,” Fardeau said.

More on this topic:
Mukhtar Ablyazov