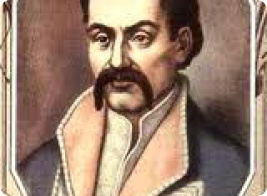 April 5th, 2010 marks the 300th anniversary of the first cossacs’ fundamental rights document, written by the follower of Ivan Mazepa’s  independence program, Hetman in exile, Pylyp Orlyk – one of the brightest figures in Ukrainian history, who has a definitely positive connotation in Polish-Ukrainian relations. Hetman’s family originated from the Polish nobility of Czech origin, which settled in Lithuania. After Hetman Mazepa’s defeat in the Battle of Poltava, Pylyp Orlyk was elected Hetman by the cossacs, who didn’t accept Russian Tzar. His diplomacy was based on ties with the Republic of Poland, Turkey, and France. Being in exile, he wrote a discourse on rights, which is considered to be the first Constitution of Ukraine. According to the Decree of the President of Ukraine this anniversary is celebrated at the national level.

This occasion may serve as an encouragement for a deeper scientific reflection on the Ukrainian legislation in the historical retrospective, and, first of all, nowadays, highlighting the Polish-Ukrainian aspect of this event. Secondly, this may be a reason to organize a scientific forum of great social and political importance, which could also give impetus to the future cooperation between academic centres of Ukraine from the point of common projects.

The conference is held under the honorable patronage of the Ambassador of Ukraine in Poland.

Organizers and co-organizers of the Conference:

Every participant of the Conference will receive a special letter from the President of Poland Bronisław Komorowski.

Topics to be discussed on the agenda:

–        The history of Pylyp Orlyk’s Constitution

–        The position of the Church in the light of Ukrainian law system.