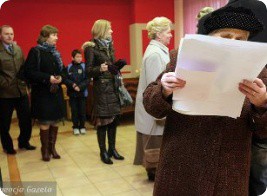 On Sunday, November 21, 2010 Polish local government elections were observed by the citizens of Belarus, Russia and Ukraine, brought there by the City Council of Lublin and ”Open Dialog” Foundation. Approximately 20 people took part in observation in the cities of Lublin and Warsaw.

The main goal of the monitoring mission was to cite Polish local elections as an example, that such European values as personal freedom, human rights, democracy and self-determination are not just declarations, but can also be a common reality of life for every citizen, and to a considerable extent depend on state politics.

On November 20, at 11 a.m. in the room of Self-Government of Theology Department there took place a training on electoral law for the citizens of Belarus, Russia and Ukraine. It was conducted by the Head of the Department of Urban Development of Lublin Krzysztof Łątka, an expert in Poland and Eastern countries relations, able to point some fundamental differences in electoral systems of those countries.

The initiative for the observation appeared shortly after Ukrainian local government elections took place, where both the Foundation and City Council of Lublin conducted election monitoring. To summarize the monitoring mission, a special report will be written to help keeping the experience exchange between Poland and the East.