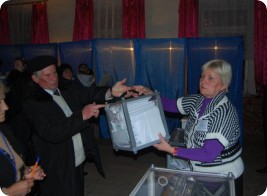 Report of observation mission of local self-government election in Ukraine,

Long-term observation was organized by an observation group which consisted of Yaroslav Prystash, editor of weekly of Ukrainian minority in Poland “Nasze Słowo” and Danilo Bekturganov – expert of election campaigns in Kazakhstan. The purpose of work of long-term observers was to indicate circumstances and challenges which could influence the voting process, as well as possible legal failures on the day of voting. So, within the framework of this purpose the group had a task to have as many meetings as possible with candidates, members of election commissions, municipal and regional administration. The group participated in 18 meetings in total, on their basis the following conclusions can be made.

Most candidates surveyed by members of the group criticized the term chosen by the authorities to conduct election campaign, saying that two months (60 calendar days) are far too little to arrange such important actions. More than half of the surveyed think that the mixed system (mainly proportionate) in local elections made the procedure far too complicated, which, taking into account the term of campaign, creates opportunities for law violations.

Most surveyed said that the principles of establishing of election commissions were non-transparent and unfair. Most of the surveyed has doubts concerning appropriate qualifications of members of district and constituency election commissions. The group of long-term observers state that the Ukrainian legal system really gives ground for such moods. Self-government Election Law (art. 15, item 1) provides 60 days for election campaign from the date of announcement of election till the election day.ą

The observers think that such period is not enough to make transparent and just choice of election сommission members, as well as to prepare the members in an appropriate way.

Within this period (60 calendar days) according to the Law, the candidates have only 9 calendar days for registration (art. 40, item 2, art. 41, item 2, art. 42, item 2) and no more than 22 calendar days for campaigning (art. 47, item 2). Such a short period of time in practice means that a candidate does not have time to make any amendments to documents. The short campaigning period pushes a candidate towards aggressive and often unfair campaign as the only possible way to draw mass media’s attention. The observers expressed their worries also because of the provision which regulates the procedure of signing the final protocols (art. 72, item 5). Protocols are signed by a Chairman, secretary and one member of election commission.

The observers noted that on the basis of legal procedures of commission creation (art. 22 item 1, 2, 3 – for territorial commissions, art. 23 item 1 – for district commissions), sufficient number of representatives of ally parties can be formed, who can block any decision. Unfortunately, the conclusion of observers is proved by a number of scandalous facts noticed during the campaign. For example, Central Election Commission in Lviv did not make any decision regarding exclusion of the Batkivshchyna party representatives from the voters’ lists. The decision to exclude those candidates was made twice, and every time the commission was unable to make a decision, as the number of supporters and opponents was equal. As a result the Batkivshchyna was not removed from party lists in Lviv, so the party can possibly challenge the results of election in Lviv.

The group of long-term observers states that in the above cases as well as in actions of election commissions there are certain decisions made which contradict the provisions of the Law, but are in conformity with political trends. The fact that bodies of electoral administration and courts make “political” decisions when it comes to purely legal issues is a sign of failure to keep balance among different organs of power. The consequences of such failure can have a considerable influence on election results and the whole democratic process in Ukraine.

The group of long-term observers on the basis of analysis of their work made the following conclusions:

1. Present Ukrainian self-government election legislation does not provide for transparent, just and democratic election process in the area of terms of elections and establishing working groups.

The Group of observers state that at the moment of finishing the election campaign (October 29, 2010) it did not reveal any pretexts for mass violation of law on the day of voting, as violations of law do not make sense for the candidates in local self-government elections. Minor violations expected by the Group will take place due to low level of qualifications of members of district commissions, but they will not be of systematic character.