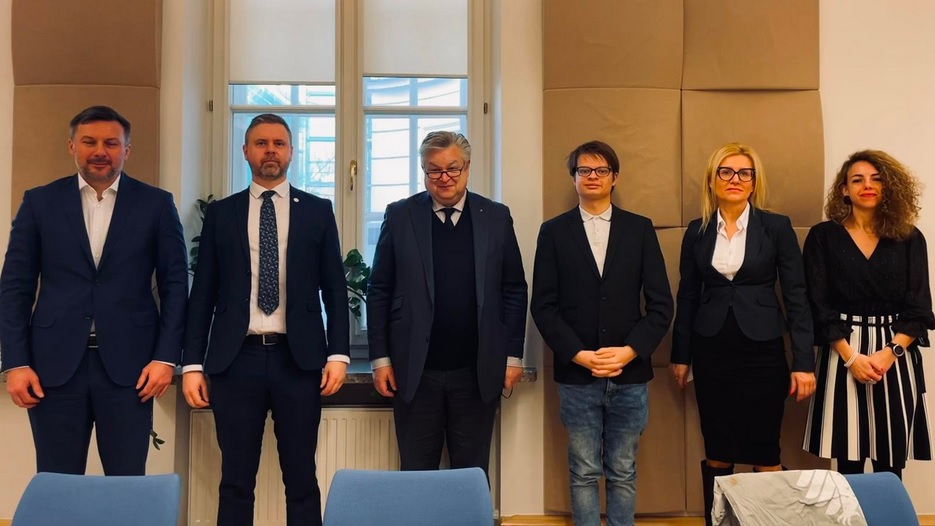 On February 1st, in the Warsaw headquarters of the OSCE Office for Democratic Institutions and Human Rights (ODHIR), the three leaders of the OSCE Parliamentary Assembly’s (OSCE PA) human rights committee met with Polish civil society representatives at the forefront of defending the rule of law in the country. The purpose of the meeting was to present the situation in Poland as seen by activists, deepen the cooperation between civil society and international partners and discuss approaches to human dimension challenges in Poland, a member of OSCE since its founding in 1995 and a holder of OSCE Chair in 2022.

Talks focused on the rule of law and human rights situation in Poland and, in particular, politically-motivated prosecution and harassment of civil society members who are critical of the ruling camp and its anti-democratic agenda. Ewa Wrzosek, prosecutor from the Warsaw-Mokotów District Prosecutor’s Office and a member of the Lex Super Omnia independent prosecutors’ association, described her being illegally hacked with the Pegasus spyware, as confirmed by Citizen Lab, an interdisciplinary laboratory at the University of Toronto. This shocking case yet again shows the grim status quo – with the person ordering/approving subjecting Ms Wrzosek to the malicious spyware being the Prosecutor General, under the current Law and Justice (PiS)-led coalition, there is no way for appeal. Another icon of resistance to the PiS rule, judge Igor Tuleya of the Regional Court in Warsaw (illegally suspended from the bench in July 2020) and a member of the Polish Judges Association “Iustitia”, discussed the reasons for which independent Polish judges are disciplinarily and/or criminally prosecuted or harassed, like: asking prejudicial questions to European Court of Justice (ECJ), delivering lectures on the Polish Constitution or issuing decisions inconvenient to the authorities.

Marta Lempart, a leader and co-founder of the All-Poland Women’s Strike (Polish: OSK) – a grassroots organization which has organized massive protests against abortion laws between the fall of 2020 and early 2021 – rising to become one of the biggest social movements in the country – described the widespread harrasment of activists fighting for the rights of women, the LGBT+ community and other vulnerable groups. The scale of government-sponsored harassment against activists is perhaps best illustrated by the numerous cases initiated against Marta Lempart herself. According to her count, she faces, at minimum, 79 cases. Among others, she has a criminal case for organizing the protests in the fall of 2020, for which she faces 8 years in prison, she has also a number of civil cases brought by people connected with the authorities and the extreme right with claims totalling over 150,000 PLN (around €33k) and a dozen or so petty offence cases across Poland for things like using “non-parliamentary language” during public assemblies.

Piotr Osiecki, an entrepreneur and investor, the founder of once the biggest private investment fund in Central and Eastern Europe, Altus Investment Fund, described his chilling story of spending 16 months in prison with the authorities attempting to turn him into a scapegoat in the “GetBack” scandal. Unprecedentedly, he has been arrested three times on the same charges for allegedly selling shares of a listed company at too high a price – Kafkaesque charges ignoring the very workings of the free market and Osiecki’s legal obligation to act in the best interest of his clients.

Finally, Jakub Kocjan, an activist and campaigner at Action Democracy (Akcja Demokracja), a pro-democratic NGO, focused on forecasts for the future and recommendations for international institutions to aid the Polish civil society. Among others, he pointed to the need of a stricter and largest ever OSCE mission to observe the next elections in Poland. As he observed, the last presidential election was not legal under the Polish Constitution with many citizens (especially the youth and expats usually voting liberal) being denied the right to vote and the results being confirmed by illegally appointed judges of the Supreme Court. According to Kocjan, the next election might even be stolen.

Michael Georg Link, Vice-Chair of the OSCE PA and the director of the OSCE/ODIHR between 2014-2017, asked whether the Polish civil society supports the rule of law conditionality designed to protect EU funds from being misused by EU governments who bend the rule of law. In reply, Katarzyna Szczypska talked about how important the mechanism is in the context of the Polish government gradually switching off all the conventional mechanisms of civilian oversight, and pointed out the the government recently plastering the country with billboards proclaiming new funds, without even mentioning that the money would be coming from the EU. Next, Johan Büser, a rapporteur to the General Committee on Democracy, Human Rights and Humanitarian Questions of the OSCE PA, asked about the civil society’s hopes and expectations for the coming years. The Polish participants expressed their concerns regarding the difficulty of the situation changing due to the current authorities succeeding in securing a skewed playing field — an unequal access to state institutions, resources, and the media.

The same day an e-meeting, co-coordinated by the Open Dialogue Foundation, between OSCE PA rights leaders and border activists Natalia Gebert and Anna Alboth was held, devoted entirely to the humanitarian crisis on the Polish-Belarussian border. We enthusiastically greet the declaration of the Members of their willingness to visit the border region and help assess the situation themselves. Such a much-needed observatory mission would be the first international one, with the previous attempts of other international partners and institutions backfiring after being obstructed by the Polish authorities.

After the meetings, Committee Rapporteur Büser welcomed in particular the opportunity to meet with Polish NGOs, saying: “As rapporteur, discussions with civil society are essential for informing my work,”. “Parliamentarians are the link between the people and the governments, and therefore these discussions are valuable ways to ensure that the people’s concerns are heard and communicated”, he said.

During their official visit to Warsaw, the OSCE PA rights leaders also met with representatives of the Polish authorities. While the representatives of the current Polish OSCE Chairmanship iterated the words of OSCE Chairman-in-Office and Minister of Foreign Affairs of Poland, Zbigniew Rau of “recommitting to the founding principles of the Helsinki Final Act”, we once again call attention to the Polish authorities violating the very principles of the Helsinki Final Act such as the rule of law and pluralistic democracy on their own ground. While Poland holds the OSCE Chairmanship, it should lead by example.

We are thankful for the time and consideration of our OSCE PA partners and we hope for further cooperation with Polish civil society to restore the rule of law in Poland.

See also an OSCE PA press release about the visit