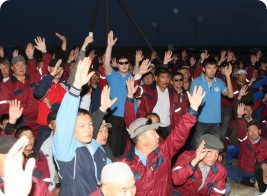 On the 1st of June, the convoy commander of the “Karazhanbasmunay JSC”  enterprise Sabit Kenzhebaev died of a heart attack. Strong attempts were made to force him to dismiss the striking workers whose demands he supported. The leader of oil industry workers of the “Karazhanbas” deposit, Kuanysh Sisenbaev, was admitted with  knife wounds to hospital on the 5th of June, where earlier two other workers of this enterprise had been admitted for treatment. All three were driven to despair and cut themselves in order to draw the attention of the employers and local authorities to infringement of basic principles and rights in the labour sphere.

Since the 11th of May, 2011, the workers of “OzenMunayGaz”, “Karazhanbasmunay”, and a part of the Italian ENI holding “The Ersai Caspian Contractor LLC” have continued their termless protest action. It is an answer to the inactivity of the foreign owners of oil deposits, employers and local authorities.

Sabit Kenzhebaev’s death has shaken the participants of the protest action, as his death was a result of an acute conflict with the enterprise management.  Strong pressure was put on him to force him to dismiss the striking workers whose demands he supported, although he himself did not participate in the strike. The leader of industry workers of the “Karazhanbas” deposit, Kuanysh Sisenbaev, was admitted with knife wounds to hospital on the 5th of June, where earlier two other workers of this enterprise had been admitted for treatment. All three were driven to despair and cut themselves; they became new victims.

Putting their lives, safety and health at stake, approx. 12,000 oil industry workers of the Mangistau area (Western Kazakhstan) have continued to defend their right to decent work.

They demand the following:

The authorities of Kazakhstan have answered to these requirements with threats and dispersal of striking workers. At the beginning of the protest action, 37 workers and lawyer Natalia Sokolova of the public association called “Workers Trade Union of Karazhanbas” were arrested. She has been accused of “incitement of social hatred”. On the 6th of June, all the arrested persons were released, except for Sokolova who still remains in custody.

In their decision on the 27th of May, 2011, the Zhanaozen city court recognized the strike as illegal, and the company administration declared that the “law enforcement bodies” will deal with the workers.

Mass lay-offs in the oil sector enterprises have begun. As soon as the administration learns the names of the workers who joined the protest action, they are thrown idle. According to independent observers, at night workers are attacked by gangsters and suffer serious physical injuries. The gangsters openly declare that they are hired by the owners of the enterprises.

For now, the government ignores the demands of numerous participants of the action. The guarantor of rights and freedom in Kazakhstan – the president Nursultan Nazarbayev – does not refer to the situation with any statements.

During recent years, Kazakhstan has tried to involve foreign investments and to develop the enterprises with foreign capital, and still, the issues of working conditions are being ignored. In such enterprises, for work of equal value, the national personnel are paid essentially less than foreign workers. Exploitation of Kazakh workers in heavy works has become one of the principal reasons for the protest action organized by oil industry workers.

Kazakhstan does not guarantee human rights in the labour sphere, though it is obliged to satisfy the conditions of 19 conventions of the International Labour Organization, including the basic ones:

Also, the following articles of the International Covenant on Civil and Political Rights are being infringed: Article 19 (on the right to freely express opinion), Article 21 (on freedom of peaceful assemblies) and Article 22 (on freedom оf association).

The authorities of Kazakhstan do not allow the independent labour unions to develop. It has become the reason for the riots among workers and the increase in social tensions. A failure to recognize the labour unions by the state and the workers’ riots are by no means the first case of this kind in Kazakhstan. Independent labour unions have repeatedly requested the representative of the International Labour Organization in Kazakhstan to support their recognition by the state. Still, their requests bring no results. Only the competent commission of the ILO can help resolve the problem and prevent the increase of social tensions in the society.

The Association “Human Rights in Central Asia” and the Public Foundation «Open Dialog» hereby urge the government of Kazakhstan to begin the dialogue with striking oil industry workers in compliance with the principles of human rights and freedom.

We strongly request that the United Nations High Commissioner for Human Rights, the European Union, the International Labour Organization, international human rights organizations, all interested persons and the mass media address the government of Kazakhstan, urging them to fulfil their obligations with regard to protection of human rights in the labour sphere as well as fundamental human rights and freedom.

Below are the addresses to which the statements may be directed:

Please do not hesitate to contact us, should you have any questions: