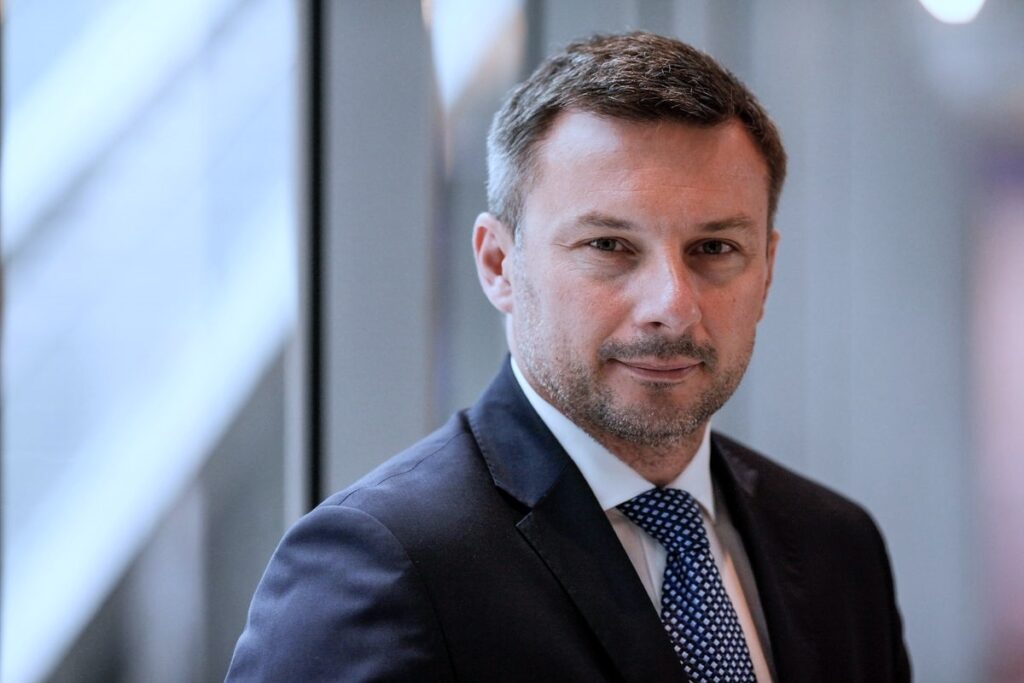 The case of entrepreneur Piotr Osiecki and Altus TFI

The below case is an extended version of a case presented in our upcoming report entitled “Polish Public Prosecutor’s Office: Selected Cases of Malicious Prosecution and Dereliction of Duties since 2015”, published with the cooperation of the Themis Judges’ Association, the Racist and Xenophobic Behaviour Monitoring Centre (OMZRiK) and ObyPomoc – Obywatele RP.

The GetBack company was a top player in Poland’s debt collection market. The so-called GetBack affair led to the loss of PLN 2.7 bln (approx. EUR 590 mln) by thousands of individual investors who bought GetBack’s fraudulent bonds.

The company seemed to be allied with the PiS party, financially supporting pro-government media, hence its pyramid-like scheme was allowed to operate until mid-2018 despite a whistleblower’s report delivered to the authorities back in 2017 and lack of any supervision from Polish Financial Supervision Authority (KNF) despite the KNF licence having been granted in 2012. When GetBack found itself at risk of insolvency, the company seeked support from the government.

Piotr Osiecki was the founder, largest shareholder and Chief Executive Officer (until 2018) of Altus TFI – an independent asset management company, which then managed approx. PLN 18 bn (EUR 4 bn) in assets. As the largest private investment fund in Poland and a competitor to state-owned PKO TFI and PZU TFI, it posed an obstacle to the state’s takeover and consolidation of the financial market. Among its successes, causing hostility from the ruling party, Altus was granted management of a part of the assets of Norway’s Oil Fund (managed by Norges Bank Investment Management), over its state competitors.

In late 2017, GetBack overpaid when acquiring almost all the bad debt held by state-controlled commercial banks. When the company’s losses and potential difficulties became evident, Konrad Kąkolewski, its CEO, asked PiS leaders for financial assistance, reminding them of the support GetBack gave to PiS as well as to government-friendly media, which GetBack financed through advertising [Among GetBack’s beneficiaries were right-wing newspapers “Gazeta Polska”, “Sieci” or “Do Rzeczy”. GetBack was also a major donor to the Man of the Year award (awarded to PM Mateusz Morawiecki and party leader Jarosław Kaczyński). – edit. note]. In his letters he stated that he “would not go down alone” and mentioned the potential risks to the government’s image if the scandal became public. Finally, in April 2018 he met with Kornel Morawiecki MP, father to PM Mateusz Morawiecki, who was allegedly recorded claiming to have secured a PLN 200 mln (ca €44 mln) public loan for the company. The next day this support was officially announced by GetBack, only to be denied hours later by the state institutions involved – the Polish Development Fund (Polski Fundusz Rozwoju, PFR) and PKO BP bank.

The scandal caused Kąkolewski to lose his post and GetBack to be suspended on the stock exchange by the Financial Supervision Commission (Komisja Nadzoru Finansowego, KNF), with the prosecutor’s office being notified. Yet, it was done only in April 2018, with much delay and with no other relevant agencies (such as the Central Anti-corruption Bureau, CBA, or Internal Security Agency, ABW) showing any activities in the case.

This is when Piotr Osiecki, as the CEO of Altus TFI, was targeted with a fabricated criminal case to redirect the blame for the affair from PiS. Altus was a client of Get Back, which managed a small portion of Altus’s assets (its debt management funds). At the same time Altus owned EGB Investments, a debt collection company which was GetBack’s competitor.

Osiecki was arrested on August 31, 2018 (with a court decision on September 1) on charges of allegedly exposing GetBack to substantial financial losses (Art. 296. kk – causing damage to business) when selling EGB Investments to it. The prosecution service charged Osiecki with acting against GetBack’s interest by selling EGB for too high a price, despite Osiecki’s duty being to the shareholders of Altus and its clients, not to GetBack. Such mechanism resembles practises known from post-Soviet countries, with similar charges having been filed e.g. by the Kazakhstani authorities in 2017 against entrepreneur Iskander Yerimbetov, brother of exiled human rights lawyer Bota Jardemalie, in order to force Jardemalie’s return to the country (the case was also covered in numerous reports). Marcin Święcicki, former Polish Minister for Economic Cooperation, OSCE Economic Coordinator and, most recently, Ukraine’s Business Ombudsman, pertinently commented on the case: “It follows from the essence of the charges brought against Yerimbetov that obtained profit is «stolen», while competitive entrepreneurship is «fraud»”.

The prosecutors only commissioned an expert valuation of EGB Investments two months after Osiecki’s arrest. The valuation was furthermore assigned to “experts” who organise training sessions for public prosecutors and the police. It appears the prosecutor was trying to make Osiecki liable for a potentially faulty methodology adopted by GetBack’s own management to evaluate the transaction, thus shifting the blame for GetBack’s allegedly unfavourable purchase away from the PiS-allied company. Moreover, the transaction was completed in August 2017 and was fully disclosed in the GetBack S.A. initial public offering prospectus that was approved by the KNF before the listing of GetBack S.A. shares.

In November 2018, another charge was filed against Piotr Osiecki, this time for allegedly causing significant material damage to GetBack S.A. for entering a supposedly dubious  agreement with Altus Doradztwo Inwestycyjne (a company owned by Anna Osiecka, the wife of Piotr Osiecki) to provide consulting services. The agreement concerned a transaction with which GetBack was purchased from Idea Bank by the ABRIS consortium. After documentation about the services provided was submitted to the prosecution, the prosecutor claimed that the remuneration received (0.5 percent of the value of the transaction) was disproportionate to the services provided. However, the prosecutor has not ordered or provided any legal opinion or analysis to justify this opinion or calculate the value of the work done.

The charge was formulated and filed in questionable circumstances that appear to have been motivated solely by a desire to harass Piotr Osiecki and his family. On November 7, 2018, when Piotr Osiecki had been transported from the detention centre for interrogation at the prosecutor’s office at 1 p.m., agents of the Central Anticorruption Bureau (CBA) arrived at the family’s home at 6 a.m. to hand Anna Osiecka a summons to the prosecutor’s office for 1 p.m. – same time as her husband’s interrogation. Anna’s last-minute questioning by the prosecution was thus specifically timed so that Osiecki would – supposedly coincidentally – see his wife at the prosecutor’s office just before his own questioning there, thus feeling his family was also threatened. Anna Osiecka was not arrested, but instead was required to post a bail of PLN 3 mln, which was the highest required of any suspect in the case apart from Piotr Osiecki himself.  The unprecedented use of CBA agents and targeting of Osiecki’s wife was a clear attempt at intimidation and harassment.

In a decision dated November 26, 2018 the district court agreed to release Piotr Osiecki from custody for a record-high bail (not just in Poland) of PLN 108 mln (roughly USD 25 mln), higher than the alleged losses incurred by GetBack and despite having frozen Osiecki’s assets.

Prosecutors appealed the district court’s decision, and on January 22, 2019, Piotr Osiecki was again arrested after a ruling by the court of appeal, which agreed to another three months’ detention while at the same time upholding the continued posting of the bail. As a result, Piotr Osiecki was illegally incarcerated despite having posted the bail.

As the attorneys appealed, the day before the appeal was to be heard, on February 26, 2019, the prosecutor’s office filed another charge against Piotr Osiecki. The charge was that Osiecki had organised and conducted the bond sale through the networks of Idea Bank and Lions Bank, despite not being employed by any of these two entities. In reality, neither Altus TFI S.A. nor any investment funds managed by it offered any bonds issued by GetBack. The prosecution apparently confused the parties to the transaction, as investment funds managed by Altus TFI did not sell, but took up bonds issued by GetBack. In addition, the alleged illegal acts were described as “being in the interest of funds under his management“, which is precisely what Osiecki was required to do per business logic and Poland’s law on investment funds. In addition to this, Osiecki was himself one of the cheated bondholders of GetBack S.A. and suffered a loss of ca USD 2 mln.

In February 2019 the Polish Commissioner for Human Rights (ombudsman, Rzecznik Praw Obywatelskich, RPO) requested access to court decisions on Osiecki’s detention, following a legal analysis by Dr Hanna Gajewska-Kraczkowska from the Institute of Criminal Law at the University of Warsaw, who assessed that “by virtue of the judgement of the Court of Appeal, the arrest was legally converted into a property surety and therefore the arrest warrant was issued unjustly”. On April 18, 2019, the district court again ruled that Osiecki could be released from custody in exchange for a bail of PLN 110 mln (EUR 24 mln). Piotr Osiecki was released the next day. The prosecutor’s office appealed this ruling and on June 18, 2019, Osiecki was again arrested by decision of the court of appeal, which extended his arrest for another three months from the date of arrest.

This is the first instance in the history of Poland’s judicial system that an accused has been arrested three times on the same charges. Rulings by the court of appeal in January and June 2019 favourable to the prosecutor’s office were made by district court judges assigned to the court of appeal by the Minister of Justice.

Osiecki’s detention was also criticised in several public appeals by the Polish Business Roundtable (Polska Rada Biznesu, PRB), the association of owners and top managers of the largest companies operating in Poland, which called it “lawless” and “an example of violation of the rule of law, civil liberties, dignity and fundamental human rights”.

A special team of prosecutors, currently in the Warsaw provincial office, is handling the GetBack case (and Osiecki’s within it), none with experience in such economic cases. These are Jakub Romelczyk, Wojciech Smoleń, Przemysław Baranowski, Karol Węgrzyn, Marta Choromańska, Monika Milewska, Przemysław Ścibisz and Dariusz Cioban. All were either delegated or expeditiously promoted to the Warsaw provincial office and all are included in LSO and/or Państwo PiS databases. Decisions in Osiecki’s case were signed by prosecutors Romelczyk and/or Smoleń and/or Baranowski.

The entire case seems to have been created to take responsibility away from the government and its leaders (most notably PM Morawiecki and his family), covering the failures of the KNF and the ties between GetBack and the ruling camp. It also formed a striking example of a corporate raidership attempt in Poland, as directly after the public prosecution initiated its investigation into Osiecki Altus started receiving extremely undervalued purchase offers from state-linked buyers. This practice of state extortion is well known in Russia, Ukraine, Kazakhstan and other post-Soviet states. As a result of this persecution, the capitalisation of Osiecki’s Altus TFI dropped from approx. PLN 1 bn to PLN 60 mln.