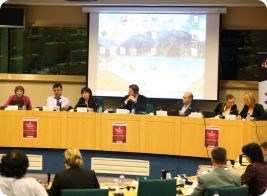 Central Asia: How to prevent and fight corruption?

The conference “Central Asia: How to prevent and fight corruption?” was organised by the Open Dialog Foundation and the FLARE Network under the patronage of the MEP Marek Migalski (Party of European Conservatives and Reformers) and the Society for Promoting Human Rights Protection in Central Asia and the daily newspaper “Eastern Korrespondent” which was held on the 22nd of June this year in the European Parliament attracted over 50 participants.

The representatives of the civil society of Kazakhstan, Kyrgyzstan and Uzbekistan presented the phenomenon of corruption related to the current problems of the region and the effects of the initiatives and activities undertaken by European institutions with the scope of counteracting corrupt practices. Muratbek Ketebayev, the Chairman of the “Civil activity” Foundation which supports the development of civil society in Kazakhstan, presented a scenario, according to which a gradual drop in the level of corruption in this country will be associated with the initiation of the democratic process of handing over the power which next will be leading to its decentralization. Irina Petrushova, the editor-in-chief of the Kazakh newspaper “Respublika” cast light on some interdependencies between family and clan connections and  corruption in Kazakhstan. A film presenting private properties of Kazakh politicians and clerks located in some European countries, mainly in Switzerland and Spain, made a great impression on the conference participants. In Nadejda Ataevaya’s opinion (Association “Human Rights in Central Asia”), the omnipresence of corruption in Uzbekistan means that without rigorous control over EU grants allocated for the region, it is very highly probable that instead of encouraging social objectives, the development and the democracy, they will be in fact spent for strengthening the power of the dictatorial regimes. The actual allocation of subsidies granted for the foundation of the president’s daughter, Islama Karimova, in the amount of 3.7 euro is vague. A coexistence of formal legal and institutional structures with the parallel network of patron connections of family-clan and feudal-client nature which determine social and business relations are characteristic for Central Asian countries – noticed Alisher Ilkhamov from the Open Society Foundation (London). MEP, Katarina Nevedalova, referred to the experience of her native Slovakia and stated that the effective fight against corruption would depend on the generation change – new generations must be brought up in the competent culture of functioning in the society, therefore in counteracting corruption, grass root work is so important and necessary. MEP Paul Murphy when sharing the example of current strikes of oil sector employees in Kazakhstan, showed that the corruption on all rungs of the power can indirectly cause the greatest individual human tragedies. MEP Sonia Alfano expressed her belief that the success in the fight against corruption worldwide, both in Italy and Kazakhstan, depends to a large extent on the political will of those holding the authority. Jaqueline Hala from the Open Society Foundation (Brussels) drew the attention on the role of the regulations being in force in legislative systems of individual countries which can counteract, or – like it is in Central Asia – support the corruption. Tom Mayne, the analyst of the Global Witness organization emphasized the fact of involving European banks (such as Deutsche Bank) and other financial institutions (like the London Stock Exchange) in corruption activities, as they often become a place of depositing and legalizing Central Asian corruption assets. Of particular interest were the findings presented by professor Alina Mungiu-Pippidi showing forms and the scale of corruption in the region in the course of the recent years which made evident the need for new international effective initiatives for counteraction and fight against corruption. Moreover, she pointed at the differences between corruption in Europe, and in Central Asia, where the corruption has a systemic character, being deeply rooted both in individual officers of the state apparatus, and in the legal, institutional and cultural environment. According to Cezary Bardziński’s opinion (Eastern Policy Team Permanent Representation of the Republic of Poland to the EU) it is difficult to reform the country from a distance (hence the small effectiveness of the EU programmes for the region) – a society exerting influence on authorities must be a source of reforms above all. The involvement of the EU will grow, but will depend on the economic meaning of Central Asia for Europe. The triggered discussion  with the participation of European politicians, activists of non-governmental organizations and media resulted in adopting a multilateral declaration about undertaking joint activities based on the permanent monitoring of the situation, the scale and main cases of corruption in the Central Asia. We believe that these words will become flesh.

You are invited to see a multimedia report from the conference following this link.