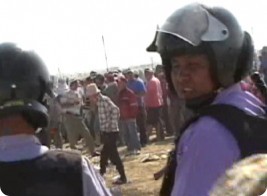 West Kazakhstan: authorities are up to violent reprisals against oil workers on strike

In the Mangistau province of Kazakhstan a real threat has emerged to the security and safety of thousands of oil workers participating in a collective action – a strike – which they started 11 May 2011. Taking part in the strike are oil workers of “OzenMunayGaz”, “Karazhanbasmunay” and “Ersai Caspian Contractor”, the latter is part of the Italian holding ENI. The workers are continuing an action of civic protest of indefinite duration. The workers on strike are being joined by more and more employees of auxiliary production units and relatives. According to the observers, over the months 8 to 15 thousand persons took part. During the strike some 900 workers were fired. We have already wrote about it in the press release “Kazakhstan: inactivity of the authorities pushesoil industry workers to suicide!” of 14 June 2011.

This collective action was a response to the inaction of the employers – foreign owners of oil deposits and local authorities. Neither of these parties are reacting to the workers’ demands.

Demands of the industrial action are the same:

– To allow creation and functioning of the independent trade unions and their structures including the work of the trade union “Karakiyak”;

– To revise the collective agreement based on the principle of equality of parties and taking into consideration the interests and rights of the workers;

– To raise the wages of the workers by 100% as the current one does not provide for the factual minimum living standards;

– To bring wages and other working conditions in accordance with the International Labour Standards.

Over the last days alarming events are unfolding in the cities where the enterprises are located and where the employees have gone on strike.

8 July 2011 in the city of Zhanaozen at about 16:00 unexpectedly and without explanation or warning a unit of fully armed special police landed and attacked peaceful citizens. Without negotiations or demands policemen started to disperse the gathered people, beating them with clubs, overturned the woks with food, which was prepared by relatives, tore off the roof of a makeshift tent, where people were sitting. According to the witnesses the police officers’ behaviour was aggressive; they were doing this on purpose in order to provoke confrontation. Men and women taking part in the strike tried to stop the police officers but were severely beaten up.  About 30 persons were forcibly brought to the local hospitals. As of 12 July a number of the arrested persons could have managed to escape from the hospitals.

Realizing that the forces are unequal a group of 60 oil workers who are on hunger strike poured petrol over their bodies and announced that they were ready to burn themselves up as a sign of protest against the lawlessness and violence of the police.

Over a thousand of protesting oil workers was rounded up by the police on the territory of the “OzenMunayGaz” enterprise. Special police unit is hindering their communication with the outer world. More than 4,000 people gathered in the square of Zhanaozen to express their solidarity with the protesting oil workers.

9-10 July 2011 after a violent action against the fired employees of “OzenMunayGaz” now n hunger strike a mass meeting followed in the city of Mangistau. Following the violent dispersal of the hunger strike participants and sympathizing colleagues, who all this time were gathering on the territory of the “OzenMunayGaz” enterprise, the city residents started spontaneously flowing into the square in front of the local akimat (city administration) including the elderly people, women and children. At a short distance a fully equipped special police unit brought here on several coaches was watching over it.

According to the workers on strike the excuse for the mass discontent was the behaviour of the special police unit, who tried to obstruct the traditional “sadaqa” ceremony on the territory of the Directorate No.5 in charge of the oil wells (UOS-5). It was to the worst point where policemen overturned the wok with food and started the dispersal of the people present at the ceremony with clubs.

11 July 2011 crowds of people gathering in the square in front of the administration of the city of Zhanaozen consisted of families including the elderly people and children. At that very time special police units with special equipment were stationed at the nearby schools Nos. 9, 18, and 19. According to our information, a water-jet, 18 firefighting trucks, 3 military KamAZ trucks, and 4 coaches with special policemen are hidden in the Kazakhstan gas processing plant (KazGPZ) and ready to start reprisals at any moment.

The unfolding situation is posing threat to the health and safety of active strike participants:

– since 25 May 2011 the lawyer of the trade union of the “Karazhanbasmunay” shareholding company Natalia Sokolova, was detained under Article 164 of the Criminal Code of the Republic of Kazakhstan for “inciting social discord”. There is no information about her condition; she is being denied access to lawyers, relatives or her husband;

– Kuanysh Sisenbaev, leader of the trade unions of the workers of “Karazhanbasmunay” has been subject to the pressure from authorities since 1 July 2011 in the city of Aktau. He is being blamed of organizing a protest march of oil workers, which took place in Aktau on 5 June 2011. During the violent reprisals several demonstrators were arrested by the police. Kuanysh Sisenbaev and his two colleagues were driven to suicide, as a result of which they were taken to a hospital. Sisenbaev has been charged under Article 373 of the Administrative Delinquency Code of the Republic of Kazakhstan “Violation of legislation on the order of organizing and conducting peaceful gathering, meetings, marches, pickets and demonstrations”;

– 30 June 2011 a leader of the trade union “OzenMunayGaz” Akzhanat Aminov was arrested under Article 164 of the Criminal Code of the Republic of Kazakhstan “for inciting social discord”. Aminov suffers from diabetes and in constant need to medical care. Currently he is totally isolated in a SIZO; he is denied medical care, meetings with relatives and a lawyer, which is a form of cruel treatment with the aim of exercising pressure over the workers on strike;

– Natalya Azhigalieva, activist of the “OzenMunayGaz” workers on strike, the 5th tier operator of the oil-and-gas production directorate (NGDU) of “OzenMunayGaz” was fired. She was among the 30 detained oil workers who went on hunger strike and who were forcibly taken to a hospital on 8 July in the city of Zhanaozen. In the morning of 11 July she managed to escape from the hospital, which is under the surveillance of the special police unit. Criminal charges are being fabricated against her under Article 164 of the CC of RK “for inciting social discord”.

According to our observations, in breach of its international obligations the Republic of Kazakhstan took the side of the employer in the industrial dispute and is using law enforcement bodies against trade union activists and workers on strike, violent reprisals against strikes and peaceful protests.

According to our information, during the strike the oil workers offered to start negotiations on peaceful settlement of the dispute. However, the Kazakhstan authorities are going to ignore the demands of the workers on strike despite the obligations assumed by the state.

The provisions of international agreements violated by Kazakhstan are as follows:

– Article 19 (the right to express one’s opinion), Article 21 (freedom of peaceful gatherings), Article 22 (freedom of association) of the International Covenant on Civil and Political Rights;

– 19 Conventions of the International Labour Organization including the fundamental ones:

– Convention 81 Labour Inspection, 1947, pursuant to which the state in the person of state labour inspection shall undertake relevant measures in case the human rights at work are violated;

– Convention 87 Freedom of Association and Protection of the Right to Organize, 1948,  pursuant to which the state shall allow the organization of trade unions of workers created for the protection of their lawful interests and shall recognize them;

– Convention 98 Right to Organise and Collective Bargaining Convention, 1949, pursuant to which employers shall conduct negotiations with workers’ representatives and the state shall be the guarantor of the consultative process;

– Convention 111 Discrimination (Employment and Occupation) Convention, 1958, pursuant to which it shall be prohibited to discriminate on the basis of race, colour, sex, religion, political opinion, national extraction or social origin, which has the effect of nullifying or impairing equality of opportunity or treatment in employment or occupation;

There is a well-founded concern that oil workers on strike will be driven to despair and to extreme measures inflicting harm to their health and the authorities will bring violent reprisals against them ignoring their lawful and reasonable demands.

We most earnestly ask for your help in launching the positive response of the national bodies in the field of human rights protection to the full extent.