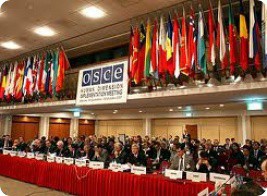 Seminar “Kazakhstan: How the International Community can support act the Striking Oil Workers in Struggle for their Human and Labour Rights?”

Support for the striking workers in Kazakhstan.

On 28 September, 2011, the Open Dialog Foundation, within the framework of the conference of the Organization for Security and Co-operation in Europe entitled Human Dimension Implementation Europe Meeting in Warsaw, is going to organize a seminar: Kazakhstan: How the International Community can support act the Striking Oil Workers in Struggle for their Human and Labour Rights?

The aim of the meeting is to coordinate and extend the support for the striking workers on the international forum.

Employees of oil extraction companies in Western Kazakhstan have been carrying out the strike since 11 May, 2011 – until now more than 15 000 persons took part in it. Apart from social claims, the workers also demand to register independent labor unions, release the imprisoned labor union leaders and terminate the repressions against them. The strike was acknowledged as illegal by the court. Special police units suppress the workers’ protests. They apprehended and arrested legitimate leaders and activists of labor unions, including Natalia Sokolova (6 years of imprisonment), Kuanysh Sisenbaea, Akzhanat Aminov, Natalia Azhigalieva and others. A young activist and an 18-year-old daughter of a labor union leader were killed under unexplained circumstances.

In the light of the abovenamed situation, it seems justified to ask the following questions:

– What were the reasons of the strike of the workers in Western Kazakhstan?

– What is the employers’ standpoint? What was the reaction of authorities?

– What will be the lot of the arrested labor union members?

– What will happen with the familie of more than 2500 dismissed oil company workers who are left without any means of subsistence?

– What impact can have the mass exits from the presidential party “Nur Otan”?

– Do the social problems which are now seen in Kazachstan represent a deep structural crisis of the country which wants to be perceived as an oasis of stability and prosperity in the region?

– Can the present civil disorders transform into mass protests? Is it possible that the situation which we have seen in North Africa will repeat here?

– What is the most probable scenario of future events?

– Can the international socjety intervene in this situation? If so, how?

– How can Poland export the experience from the period of Solidarity?

The labor union representatives who represent the employees of three large oil extraction enterprises: OzenMunayGaz, Karazhanbasmunay and Ersai Caspian Contractor (a member of the ENI Italian energetic holding company), which conduct works in Western Kazakhstan, will take part in the meeting. Among the participants will be the members of the National Front, which is oppositional to authorities: Vladimir Kozlov – Chairman of the Democratic Party “Alga!”, Igor Vinyavskiy – the editor-in-chief of the independent newspaper “Vzglyad”. On the Polish part, the invitations were given to former activists of Solidarity and Workers’ Defence Committee, human rights defenders, Members of the Polish Seym and the Committee on Justice and Human Rights, members of a bilateral group Poland-Kazakhstan, opposition activists of the period of the Peoples’ Republic of Poland with their leader, the President Lech Wałęsa.

The Foundation cordially invites all those who are interested in the subjects which are going to be raised. Please contact us to confirm your attendance and to register by 23 September, 2011.