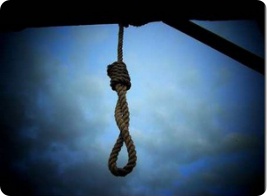 Abay Abenov, an electrician of the “Ozenenergoneft” company was found hung

Abay Abenov, an electrician of the “Ozenenergoneft” company was found hung

On October 03, 2011 Abay Abenov, a 30-year old electrician of the “Ozenenergoneft” company who was dismissed from work, hanged himself on the night of Monday, October 3rd, in his house in Tenge village. His colleagues were quick to stress that there was a link between the tragedy and  the desperate situation in which he had recently found himself, just like many other strikers due to the civic position that they had  taken. As a result, the deceased faced the lack of means of subsistence for himself and his large family (his wife is unemployed) and had no employment prospects because of his participation in the strikes.

The police of the city of Zhanaozen admitted the fact of his death, however, they declined to make any further comment on the incident.