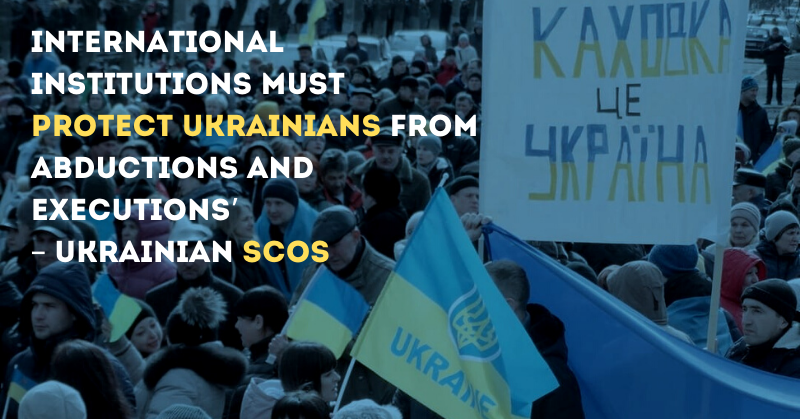 The appeal was published on March 14 https://zmina.ua/statements/mizhnarodni-struktury-mayut-zahystyty-ukrayincziv-vid-vykraden-ta-strat-gromadskist/

APPEAL
to the international community
on abductions and executions of Ukrainian activists, journalists, and local government officials in Russian-occupied territories

On February 24, 2022, the full-scale war of the Russian Federation against Ukraine began. This has already resulted in thousands of civilian casualties, massive internal displacement, and departure of millions of Ukrainians abroad. As a result of hostilities, part of the populated localities of the south and east of Ukraine came under the temporary control of the troops of the Russian Federation. In these areas, the occupying forces seek to establish control, and thus take measures to intimidate the local population.

Over the past week, we have been documenting “arrests” and, in fact, abductions of Ukrainian activists, volunteers, journalists, and representatives of local self-government bodies in Hostomel, Kherson, Berdyansk, Melitopol, Volnovakha, Nova Kakhovka, and other Russian-occupied populated localities. There are also known cases of murders of Ukrainian activists.

On March 7, it became known that the Russian military shot dead Yuriy Prylypko, mayor of Hostomel town (Kyiv region), and two volunteers, Ruslan Karpenko and Ivan Zorya, while they were giving out humanitarian aid to people.

At least three people have been abducted in Melitopol, Zaporizhzhia region, including Mayor Ivan Fedorov on March 11, activist Olha Haisumova on March 12, and chairman of the district council Serhiy Pryima on March 13.

It became known about the abduction of Mayor Yevheniy Matveyev in the town of Dniprorudne (Zaporizhzhia region) on March 13.

The contact with them was lost, but there is credible evidence that they were detained by the Russian military. There are well-founded suspicions that abducted activists and local government officials are being subjected to intimidation and torture.

In addition, according to MP Dmytro Lubinets, Russian military “arrested” more than 20 Ukrainian activists in Volnovakha. Moreover, according to him, all these activists were on the lists covered by numerous Western media in February – the lists of activists to be “killed or sent to camps” after the Russian invasion of Ukraine.

On March 13, it became known about the murder of a volunteer, Ukrainian activist Oleksandr Kononov, who was shot dead by Russian military in his own house in the village of Borivske near Severodonetsk, the Luhansk region. In 2014, Oleksandr Kononov spent 98 days in captivity of the so-called “LPR” militants. He was a person with disabilities, he had one arm and one leg.

Such actions of the Russian army, which temporarily controls certain populated localities in the north, south, and east of Ukraine, show a desire to intimidate local residents who resist the occupation, persuade them to cooperate, and the intention to take revenge on Ukrainian activists, human rights activistsб and local leaders for their pro-Ukrainian stance.

Disregard and passive reaction of the international community to the manifestations of Russian aggression will lead to a scale of human rights violations, war crimes, and crimes against humanity, including an increase in enforced disappearances and killings. In addition, citizens of other countries, including Belarusian activists, foreign journalists, and other persons legally staying in Ukraine, will also be at risk.

We demand that, in particular, International Committee of the Red Cross, UN Working Group on Enforced or Involuntary Disappearances, UN Special Rapporteur on Extrajudicial, Summary or Arbitrary Executions, UN Working Group on Arbitrary Detention, UN Special Rapporteur on the Situation of Human Rights Defenders, Office of the UN High Commissioner for Human Rights, Secretary General of the Council of Europe, Council of Europe Commissioner for Human Rights, Council of Europe Steering Committee on Media and Information Society, PACE Committee on Legal Affairs and Human Rights, PACE Chief Rapporteur on Situation of Human Rights Defenders, representatives of the EU, European External Action Service, OSCE Representative on Freedom of the Media, Congress of Local and Regional Authorities, within the framework of all possible powers and mandates from the international community, should: