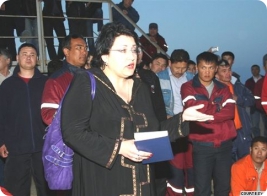 Legal advisor for “Arman LLP”, a joint-venture company, an oil-extracting company, its owners are partners of the company ”LUKOIL Overseas Kazakhstan” and “Shell Development Kazakhstan Limited, the city of Aktau, from July, 2006 until June, 2009.

Director of the Personnel Department in the joint-stock company “Karazhanbasmunay”, the owners of which are partners of the CITIC Group of Companies and the oil-extracting company  “KazMunayGaz”, from May, 2009 until May 2010.

Lawyer for the Оpen Company ”The Trade Union of Workers of Karazhanbas”  from September 2010 until now.

On 8 September, 2011 in Aktau, the Aktau City Court №1 (a judge Gulmarzhan Adil-Sultani) issued a decision, sentencing Natalia Sokolova, an activist of the strike movement and a lawyer of the trade union of workers of the company “Каrazhanbasmunay” for six years of imprisonment in a standard regime penal prison under Article 164, paragraph 3, and Article 334, paragraph 2 of the Criminal Code of the Republic of Kazakhstan — “incitement of social hatred and violation of  order of organization and conducting of meetings, political gatherings, pickets, street marches and demonstrations”. The criminal case was initiated upon the motion of the President of the company “Каrazhanbasmunay” Jsc., Yuan Mu (China). According to supporters of the strikers, aside to the prison term, Natalia Sokolova received a ban on legal practice and public work for three years, and was deemed responsible for the whole damage incurred by the company “Каrаzhanbasmunsay” from May, 2011, namely 1 billion 219 million tenge (5 million 780 thousand Euro). The chronicle of events connected with Natalia Sokolova shows the rapidity of events.

TWO PENALTIES AND ARREST IN MAY

Natalia Sokolova, the lawyer of the Trade Union of Workers of the company “Каrazhanbasmunay”, has been charged in administrative cases three times before the initiation of the criminal case. She was accused of incitement of social hatred.

It turned out that the day before a criminal case under Article 164, paragraph 3 of the Criminal Code of the Republic of Kazakhstan (“incitement of social, national, clannish, racial or religious hatred”) was initiated with regard to Natalia Sokolova. The Aktau City Court put her under custody for the time of preliminary investigation, i.e. until 1 August. The criminal case against Natalia Sokolova was initiated upon the motion of Yuan Mu, the Chinese director of the company “Каrazhanbasmunay”.

In the Department of Internal Affairs of Mangistau region it is claimed that “the grounds for incitement of criminal case was a collective motion filed by workers of the company “Каrazhanbasmunay” and by the management of the enterprise. In the motion Sokolova was charged with organization of numerous unapproved meetings on the territory of the “Karazhanbas” deposit as well as with the calls to the workers to carry out a hunger strike, which led to disturbance of normal work, and, as a result, brought to a conflict situation between the employer and workers incurred”.

Vasilij Chepurnoi stated that during the investigation he had no possibility to see his wife.  As he said himself, their child, and especially Natalia Sokolova were all put under pressure: ”They tried to force her to admit on the video that she made mistakes, to say that she was wrong and that she acted incorrectly and initiated illegal actions. But she refused to do so, because she considers that everything should be done according to the law and that everyone, including foreign investors, are obliged to observe the law”.

Natalia Sokolova’s trial began on 28 July, 2011. When speaking in the courtroom, Natalia Sokolova denied charges against her. She declared that “participation in the arbitration process, comparison of wages and discussion on the multipliers, as well as carrying out and participation in trade-union meetings is an absolutely normal phenomenon and a legitimate right of workers in our country. It cannot be perceived as a criminal activity or inciting social hatred among the workers” (source: the Opposition Organization “Socialist Resistance of Kazakhstan”).

According to the information given by the opposition organization “Socialist Resistance of Kazakhstan”, in April the trade union of oil industry workers addressed the employer and the Akimat of the region with a demand to restart reconciliation procedures, restart arbitration and other negotiations with the aim to settle the conflict situation.

“The reason why people were provoked and pushed to hunger-strike, and later to the strike were not  the famous discrepancies in the level of wages at different enterprises of “KazMunayGaz”, but rather the employer’s rough interference in the trade union’s internal affairs after the management has openly supported Erbosyn Kosarkhanov, who had been earlier removed from the position of the chairman of the organization by the workers”, – the opposition organization “Socialist Resistance of Kazakhstan” quotes Natalia Sokolova’s words in court.

The company “Karazhanbasmunay” carries out the development of the Karazhanbas deposit, located in the northern part of the Buzachi Peninsula in the Mangistau area. Since  12 December, 2007, the owners of the company “Каrazhanbasmunay” are: the Chinese state investment corporation “CITIC Group” and the Kazakh oil company “Investigation Extraction KazMunayGaz”. They have a completely different point of view on Natalia Sokolova’s participation as a leader in the protest actions of oil industry workers.

“Some time ago, when she was hired for the job, she succeeded to persuade the former manager of the company (the president is the representative of China) to establish a personal salary for her in the amount of 1,5 million tenge a month. When the labour contract was cancelled on the initiative of the company’s administration authorities, Natalia Sokolova demanded to pay her indemnification in the amount of 86 million tenge. After administration’s refusal to do so, she filed a claim with the Aktau City Court which also refused to sustain the case. In private conversations she repeatedly threatened that she would not allow oil industry workers to live peacefully”, – declares the press-service of the oil company “Investigation Extraction KazMunayGaz”.

At the same time, according to Vasily Chepurnov, “there is no evidence and there can’t be any that Natalia threatened the employers to take reprisals. The trade union’s demands with regard to the multipliers were placed back in 2009 when Natalia only started to work as the Director of Personnel Department in “Karazhanbasmunay”, and she did not try to raise her own salary, she just presented the conditions and they were accepted by the Chinese party. Everyone forgets to mention that the multipliers claimed by the workers of “Karazhanbasmunay” in 2010 had already been implemented in a different company which belongs to ”KazMunayGaz”.

Strikes in the company “Каrazhanbasmunay” began on 17 May, and on 26 May workers of the production branch “ОzenMunayGaz” joined them. On 20 and 27 May, the court recognized that all these strikes were illegal.

Strikes have been continued until today. The striking workers demand to increase the salaries, benefits and perks, and additional payment for work under harmful working conditions. One of their requirements has been to release Natalia Sokolova, the lawyer of the trade union, from custody.

From the beginning of the protest actions hundreds of persons have been laid off from the oil companies. According to the recent information, at least 416 persons were fired. The management of the oil companies says that thousands of candidates applied for the vacancies.

On 7 August, 2011 Bolat Atabaev, a stage director, one of the founders of the social movement “National Front”, became the witness of striking oil industry workers who gathered on the square of the city of Zhanaozen, declared their collective desertion from the presidential party “Nur Otan”.  As he said, the cup of patience of the striking overflowed at the moment of murder of Zhaksylyk Turbaev, a trade-union activist and an oil industry worker-borer of the enterprise “MunayFieldService” and the prosecution of Natalia Sokolova, the lawyer of the trade union of the company “Karazhanbasmunay”, Jsc.

According to Bolat Atabaev, workers have read their appeal to the President Noursultan Nazarbaev, the leader of the party “Nur Otan”. In the appeal they declared that they are deserting his party because they understood that the party does not care about them.

In the appeal of the striking oil industry workers to Noursultan Nazarbayev it is stated that during the strike of oil industry workers they were not visited by the representatives of executive authorities, or leaders of the party or the members of the one-party parliament. And at the same time Sting, the British singer has shown his solidarity with the striking workers and cancelled his concert in connection with celebrations of the Day of Astana and Nazarbaev’s birthday.

In their appeal, the striking oil industry workers expressed their indignation with the fact that authority-supporting media cast aspersions on them, and that information about the actions of the strikers, presented by the media is tendentious.

In the appeal it is also declared that the striking invited to the region Noursultan Nazarbaev, the president of Kazakhstan as the leader of the party “Nur Otan”, and his son-in-law Timur Kulibaev who, as the strikers write, concentrated “60 percent of national economy» in his hands, but they didn’t come.

In the closing part of the appeal to Noursultan Nazarbayev, the striking workers write that his party “Nur Otan” is not concerned with the issues of ordinary people and that, as a consequence, they hereby declare that they are deserting the party.

On August 24, 2011, an appeal in the case of Sokolova was filed in the Regional Court of Mangistau.