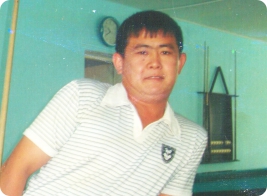 Background information: Zhaksylyk Elamanuly Turbaev, born in 1983, an oil industry worker-borer of the enterprise “MunayFieldService”, secondary technical education. He graduated from Zhanaozen College of Oil and Gas, obtaining a profession “technician of oil and gas bore holes”. Date of death: 3 August, 2011. Zhaksylyk Turbaev left behind four orphans: two children of his own and two minor sisters of his wife who had been left without parents.

On 3 August, 2011, Zhaksylyk Turbaev, a 28-year-old trade-union activist, an oil industry worker-borer of the company “MunayFieldService” was murdered in Zhanaozen. The murder took place near the group unit No. 83 KRS NGDU-1, during working hours when all the employees, except Zhaksylyk Turbaev, were called to see the company management. According to the information, the body of the worker with damages of occipital area of his head was found on the ground next to the carriage which was used as a locker room. According to the conclusion of forensic medical examination, Turbaev’s death was a result of an open craniocerebral trauma. With connection to this fact, a criminal case under Article 96, paragraph 1 of the Criminal Code of the Republic of Kazakhstan РК (homicide) was initiated.

Abdulatip Manapov, a representative of the administration of the company “МunayFieldService” has rejected any suspicions with regard to the company management on the alleged interest of the latter in punishing Zhaksylyk Turbaev. He claims that Zhaksylyk Turbaev’s death involves a criminal factor.

At the same time, according to the oil industry workers, a report-back election conference was supposed to be held in the evening of 3 August.  The trade-union activist was the main candidate for the position of a chairman. Before that, the employer had tried to persuade him to take his side, but the worker said that he was going to remain faithful to the true ideas and to his companions. According to the colleagues, Zhaksylyk Turbaev actively supported the striking workers, and, as a result, he repeatedly received threats in connection with his trade-union activity. Elaman Turbaev, the father of the deceased also sustains the version that his son was killed for ideological reasons.